Every now and then a writer not primarily known for his work in crime fiction will try his or her hand at the genre and devise a novel so sublime and so subtle that it outshines the most ingeniously constructed puzzles of the Grand Masters of the trade. Claude Aveline's first attempt at a detective novel, The Double Death of Frédéric Belot (1932), is such a book. Using a typically bizarre double murder, as might be found in any Golden Age whodunit, for the framework of his story Aveline presents a story of deeply human characters and realistic, not melodramatic, motives for the crimes committed. A story that initially comes across as a baffling puzzler of a motiveless murder eventually transforms into one with a truly tragic outcome and a bittersweet poignancy.

Frédéric Belot is a master detective, the genius of his police department, the one to whom all other officers look up and respect. He is even tapped for an important promotion but wants nothing to with a high profile police job that would take him away from real detective work and saddle him with administrative meetings and – the bane of existence – public appearances at important government functions. Scandal hits the police department when his godson, Simon Rivière an inspector in the same department, finds the body of Belot in his recently renovated home on Rue Crimée. He's been shot twice -- once in the chest, again in the head -- and is amazingly still alive. But in the adjoining room Simon and his police team find another shooting victim, this one stone cold dead. The man bears a startling resemblance to Belot from his clothes that are exact duplicates of Belot's to his striking features that make him appear to be his twin. Which man is the real Belot?

The barely alive Belot is rushed to a hospital while the dead Belot is examined at the scene of the crime. The concierge and her husband are questioned. Simon learns that only two people visited the house recently yet no shots were heard. The police doctor discovers that the corpse is wearing make-up and when it is removed there is only a trace resemblance to Belot. Who then was this man and why was he playing the part of Belot's double?

The title, the reader soon discovers, is a pun. For not only has Belot been murdered twice (his double death) it is his twin, or double, who has been killed alongside him. The play with language and dual meanings is as integral to the story as is the theme of disguise and masquerade.

Aveline also plays with the narrative structure. We begin with an anonymous writer narrating the tale, Simon then takes over telling the story of the shootings and the criminal investigation. At key points in the story the narrative is taken over by M. Regnard, the police chief, with Simon providing a written account of that portion of the story. But within M. Regnard's account there is yet another narrator who takes over in the voice of Andre Féron. It is during this portion of the story it is revealed the true identity of Belot's double and the reason for the masquerade. Minor characters earlier introduced into the story suddenly step from the wings to assume leading roles. Slowly it dawns upon Simon just why Belot had constructed a most bizarre double life. Yet a chance encounter with a lovely woman will alter Belot's carefully controlled dual life. As in real life chance plays an equally important role in the ultimate unraveling of the seemingly puzzling shootings in the apartments on Rue Crimée. 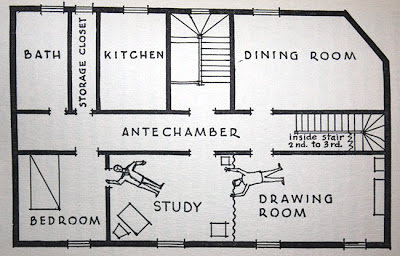 The detective novel aspects of the book are well done and show the kind of bravura performances one expects from the French. Aveline explores the bureaucracy and tedious division of departmental police stations with a insightful look at early police techniques, especially in the Identification department headed by the officious character of Cavaglioni. Interspersed with the police procedure we get the kind of detective work normally seen in puzzle novels as in the scenes where Simon is determined to explain the mystery of how the murderer entered Belot's apartments without being seen. The inclusion of floor plans (four of them!) revealing intriguing architectural features allow the reader to join the detective in uncovering the secret of the house on Rue Crimée. As soon as Simon penetrates the secret of the building he is confronted with even more mysteries and puzzles. Layer upon layer, the book never lets up. 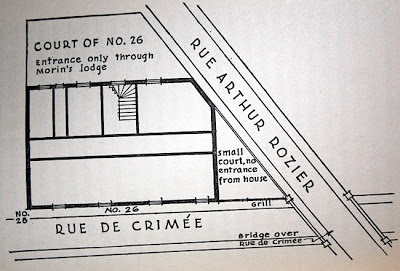 The real draw of the book, however, is the exploration of character and behavior. Aveline's portraits of M. Regnard and all the policemen, Madame Morin and her husband, but especially Féron and Belot show his gift for both complexity and nuance in character. The key to the story lies not so much in the secrets of an oddly renovated building but in the hidden lives of the fascinating characters.  Real people always make for more intriguing mysteries than locked rooms and invisible killers.

The final chapters of this book turn the entire story upside down. What appeared to be a cleverly developed murder mystery turns out to be an impassioned and impetuous act of violence. Only upon closing the book does it all truly sink in how subtly powerful Aveline's story is. Easily distracted by the illogical and the seemingly impossible the police in Double Death... overlook the most basic of human emotions. The human heart is the greatest mystery of all and often acts in a fashion that defies logic or sense.

Aveline would go on to write a handful of more detective novels, three of them -- believe it or not -- featuring Belot as the detective. I can only assume that they are cases from his early career. It is the only instance I can think of a crime writer creating a detective, killing him off in his debut, and then writing a series of prequels.

The Double Death of Frédéric Belot was reprinted several times throughout the 1970s when Aveline who had abandoned the genre for over three decades returned with a bestselling book The Passenger on the U (L'Abonné de la Ligne U) (1963) that was a big hit in France. Publishers then went digging for his earlier translated crime novels and reprinted all of them.  It is likely you will be able to find any of them, including Double Death... , for relatively affordable prices in the used book trade. I have also seen copies of the original French book offered for sale.

NOTE:  In researching photos and scans of other editions I learned that this book was a major inspiration for the crime novels of Pierre Boileau and Thomas Narcejac, my idols in all of French crime fiction.  I can easily see what they were drawn to when reading this book which is truly mesmerizing in its multiple layers.
Posted by J F Norris at 3:21 AM