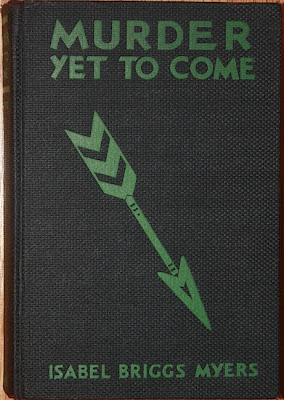 The first thing that struck me as remarkable about Murder Yet to Come (1930) was the author's gutsy use of The Moonstone and several other Wilkie Collins novels as a framework for her plot. Can it be altogether coincidental that the crux of the story is about a jewel stolen from an ancient Indian idol and later stolen again years later in a different country? Is the shared similarity of a heroine suspected to be the victim of inherited madness (see The Woman in White) yet another coincidence? I think not. I think Isabel Briggs Myers knew her Collins and knew it well. Wisely she cribbed from the best. Murder Yet to Come was her first detective novel and it won her $7500 in a writing contest for new mystery writers. It was a well deserved award, too.

Malachi Trent, eccentric millionaire, is found dead in a locked room. It appears that he has fallen from a ladder while searching for some books on the highest shelf in his bookcase lined library/study. Playwright and amateur detective Peter Jerningham soon points out that Trent has been murdered by a blow to the back of his head and the entire scene is a hastily staged scene to give the illusion of an accident by falling. Out of date textbooks stored on the highest shelf are strewn about the body? Algebra, a foreign language ancient history. Why would Trent need all of them at once and why would he select such out of date books even if he were doing some sort of research? The wound to the head is so powerful it could not have come from an accidental fall. A statue in the room shows trace signs of the victims' hair and blood. Murder has been done. But if so, then how did the murderer escape? The room has two doorways, but the main entrance was bolted shut and was broken down to gain entry. The other door at the rear of the room was nailed shut. And what happened to "The Wrath of Kali" – the huge ruby Trent kept locked away in his safe? It carries with it a curse from the goddess Kali herself who will strike down anyone who dares to defile the idol from where it was taken. Could Malachi Trent have been killed by supernatural means? 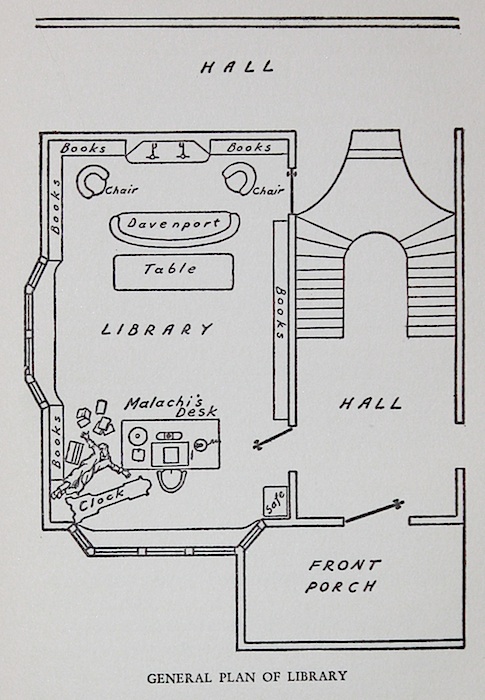 The plot thickens when Linda Marshall, Trent's 17 year old ward, is found hiding in the room. Is she the killer? Was she an eyewitness? Or did she enter afterwards? She has absolutely no memory of how she got into the room or why she was there. As the story progresses it is learned that Linda has frequent blackouts and memory losses. She also displays erratic and melodramatic behavior. There is talk of insanity. Only recently has she returned from an asylum where she was under the care of a psychiatrist and Trent had threatened repeatedly to send her back for good.

The household has two sinister servants – Mrs. Ketchum who makes cryptic references to black magic and witchcraft and has a habit of laughing wickedly at the most inappropriate times. There is also Ram Singh, a servant who came with Trent from India, who seems to have control over Linda. It is suggested that he is using hypnotic power to manipulate Linda as an instrument of Kali's vengeance. Or is it Mrs. Ketchum who has the mind controlling power? And if so, what is her motive?

The book has some excellent detective work all reminiscent of the Van Dine school. In addition to the quick work done to reveal the staged accident, there is the unraveling of the illusion of the locked room; some clues involving an inkwell, broken eyeglasses, and backward handwriting on a blotter; and an alphabetically coded safe's combination that is solved through deduction and inference. By the midpoint there is an increasing emphasis on psychology and subconscious suggestion. This leads Jerningham and his detective cohorts into a intense discussion of hypnosis focusing on the differences between cheap tricks seen in vaudeville theaters and hypnosis as a therapeutic tool. It is this psychological element in combination with the expert fair play detective work that make for an engrossing, lively and very smart mystery novel. 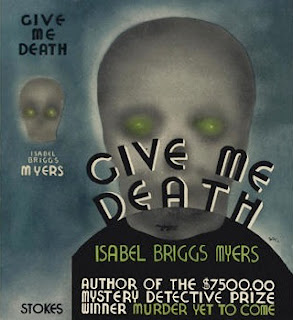 Isabel Briggs Myers' name may ring a bell. Especially if you are a student of psychology or are in the Human Resources field. Myers, along with her mother Katharine Briggs, developed one of the most widely used personality assessment tools now known as the MBTI, or the Myers-Briggs Type Indicator. Elsewhere on the internet in essays about Murder Yet to Come you will find people claiming that the book outlines Myers' theories of personality types inspired by the work of Carl Jung and his archetypes. I found none of that in the book. It is a straightforward detective novel with a love story subplot, very much influenced by S.S. Van Dine and Wilkie Collins. It's an admirable debut novel, but to look for signs of the future MBTI within its pages is a fool's errand. Her real work in the field of personality type didn't emerge until well after the start of World War 2.

Myers wrote one more detective novel, Give Me Death (an extremely rare book in the collector's world) before she completely abandoned the genre. I am sorry she didn't continue with a few more books. Based on this effort alone I think she would've given Ellery Queen and Philo Vance a run for their money.
Posted by J F Norris at 12:00 AM