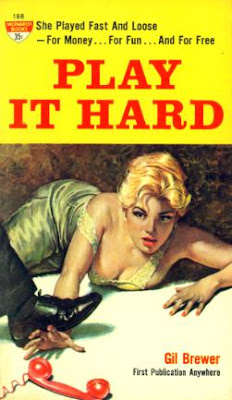 A good if not stellar example of the sex and crime thriller.  Reminded me of The Man with My Face in reverse with a bit of The Invasion of the Body Snatchers thrown in.

Steve Nolan wakes up from a drunken (or drugged?) stupor to discover the woman who claims to be his wife is a sexpot impostor.  No one believes him when he insists she is not his wife.  He approaches his pal Bill Rhodes, a cop, then his ex-girlfriend Claire.  They begrudgingly allow for the possibility of truth in his preposterous story.  The two become his only allies.

To save money Steve and his wife live with his bedridden aunt and Dr. Earl Paige and Janice Langford Nolan (the fake wife) seem to be victimizing her for some unknown reason. Even with the frequent visits from Paige Aunt Eda 's health worsens rather than improves.  Could it be all that food Jan keeps preparing? As the story progresses it is clear that Doc Paige, a one time friend of the Nolan family, and the fake Jan have joined in a conspiracy against Steve. But why?

When a dead woman is pulled from a river Rhodes asks Steve to identify her.  Though she's been violently beaten (and later learned been raped repeatedly) Steve is able to confirm that the woman is the real Jan.  To borrow a phrase from Richard Prather  -- Steve is in some kind of pickle now.

Monarch Books, the publisher, was one of the leading marketers of sleazy paperback originals in the late 50s and early 60s.  They loved sex of all kinds -- straight, gay, lesbian, three ways, bigamy -- and even ventured into publishing non-fiction books about "perverts" and "sexual deviants."  It was a prerequisite that any novel published by Monarch contain a heavy dose of sex. Brewer delivered the goods with passages like these:


There were other girls.  When one sells mattresses one has an in. Talk comes quickly to the point.  A woman wants to buy a mattress.  Take it from there.

When he touched [her breasts] she moaned, touching him with a savagery that made him explode, her body a circus of frantic urgency.  And he as wild and frantic as she -- lost in a world of heat and desire.

She laughed with wild abandon, savoring this tumultuous moment, riding her passion like a running steed, hoarsely gasping half-intelligible words. 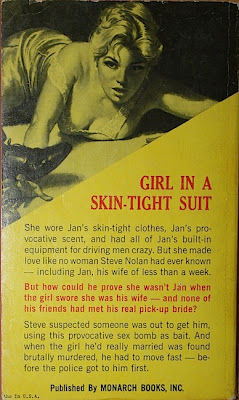 I can't help but think that last pun was Brewer's private joke at his requirement to fill pages with this kind of thing. Fulsome breasts and erect nipples abound.  Frequent use of the word "savagery" and its adjectival form sum up Brewer's style of sex writing.  The woman's bodies are always described in great detail in these books.  I find it laughable that nothing is ever mentioned about the guys other than their hands. No wonder a lot of these writers were so good at writing lesbian sleaze as well.

The crime plot is typical of this kind of book and not meant to be anything other than a frame-work on which to get a guy in trouble with violent thugs and temptresses of the flesh. This is one of Brewer's lesser books with few twists, but he tells a fast-paced, exciting story. At least you're rooting for Steve to be proven right. Unlike most of his books published for Gold Medal which were bleaker and more cruel this one even has a happy ending.