FFB: A Stranger in My Grave - Margaret Millar 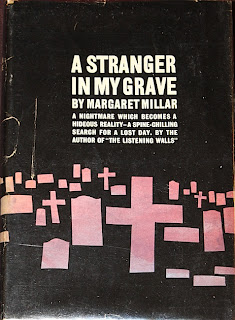 There is no doubt about it.  Margaret Millar is first and foremost a great storyteller.  Her husband, Ross Macdonald, once confessed a deep envy of her ability as a natural born writer as well. The famous example quoted in Tom Nolan's biography (as much a life story of the two crime writers as it is a bio of the creator of Lew Archer)  goes like this:


"F'rinstance" -- and he recited to me a sentence of hers with a simile in it: "Her question trailed off into the room like a faint cigarette track in the air, or something like that. The comparison between the question and the...smoke trailing off, was so perfect; the ear is so fine and the tuning so good, there."

When you combine a "natural born" talent for crafting perfect sentences like the one above with tightly plotted stories and characters who speak dialog with unique voices and who sound like people you meet in everyday life you get an end result that is all too rare in contemporary crime fiction:  real novels with real plots that both entertain the reader as mysteries and stimulate the mind with human insight and literary power.  No better example of Millar's triple whammy of talent can be found than in A Stranger in My Grave (1960), a mystery story that also happens to be a timely modern novel about birth origins, children and parenting. 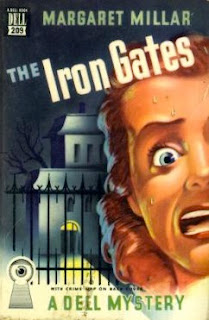 A Stranger in My Grave features one of Millar's favorite crime fiction metaphors - nightmares.  As early as her sixth novel The Iron Gates (1945), her second mystery novel set in her home province of Ontario, Canada, she was playing with the idea of dreams -- more often than not nightmares -- and how those subconscious images interplay with a character's waking life.  In the case of The Iron Gates the nightmare was an expression of a repressed guilt over a past crime and in that novel another character exploits that repression in one of the most wicked forms of revenge ever perpetrated in contemporary crime fiction.  Fifteen years later Millar returned with a similar idea in A Stranger in My Grave.

Daisy Harker dreams of visiting her own grave and hires Steve Pinata, bail bondsman and sometime private detective, to help her learn more about the date carved into the gravestone. When the two visit the cemetery they discover the grave exists exactly as described down to the unusual tree standing guard over the site. The mystery deepens when the name on the gravestone -- Carlos Camilla -- means absolutely nothing to Daisy.  The investigation then ceases to be less of the search for a "lost day" and rather the search for the connection between Camilla and Daisy.  That search will lead to Daisy's work as a volunteer in a clinic and Juanita Garcia, a woman who had a seemingly incidental contact with Daisy four years ago. 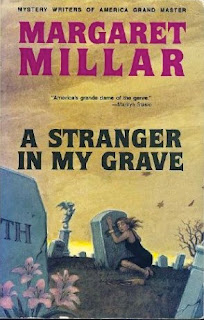 Apart from the tantalizing plot, its labyrinthine intricacies, and the near Dickensian way in which Millar manages to connect all the characters in the story there is an abundant richness of life in her fully realized and original characters. There are too many scenes I want to list as wondrous vignettes that serve as excellent examples of how Millar uses action to reveal character.  She is in many ways more of a dramatist than a novelist for she fully understands the first rule of theater and all good dramatic works -- show rather than tell.

Among the highlights are a scene in which a dog's love for Daisy is used to express her state of mind; the curmudgeon diner owner, Mrs Brewster and how she uses her denim apron as a theatrical prop as an extension of her personality; the contrast between Stan Fielding, Daisy's father and his new wife, Murial, a not too bright woman deeply in love with the man who sees his dreaming and eccentric way of speaking as signs of sophistication rather than posturing and humbuggery as most people do; Fielding's reluctance to steal a woman's purse in order to get the keys to her car -- the only thing he wants to take from her -- and how his hesitancy leads to his being caught; a powerful scene when Juanita, in a furor, attacks a locked door in the home of her religiously obsessed mother by breaking down the door with a crucifix.

And there are, of course, her words:


The promise was as frail as a bubble; it broke before his car was out of the driveway.

She had never called him Steve, and the sound of it coming from her made him feel for the first time that the name was finally and truly his own. [...] [H]e would always be grateful to her for this moment of strong, sure identity.

Time had become a living, breathing thing, attached to him as inexorably as a remora to a shark's belly, never sleeping or relaxing its grip...


The marvel of this particular book and what is most striking in my mind more than any other of Millar's is the structure and the recurring themes of childlessness, orphans, and parenting styles.  Read today in the context of negligent parents, child abuse and pop culture figures like "the Octomom", the story in  A Stranger in my Grave is amazingly timely. Beyond that timeliness is Millar's unique structure of interspersing snippets from a letter as chapter epigraphs. As the story of Daisy unfolds and the hidden truth behind her odd dream is ultimately revealed we also read a letter than was meant to be delivered to her years ago.  Only in the final chapter to we get to read the full letter along with Daisy and discover the truth at the same time she does. Only in the final words, nearly in the final sentence, is the power of the novel fully felt.

For an in-depth study of Millar's work, her relationship with her husband, and how she taught him how to be a better dialog writer read this article originally published in the Fall 2001 issue of Mystery Readers International.

Margaret Millar is the featured author this week for "Friday's Forgotten Books." There should be several reviews of her books from the regular contributors. To learn who reviewed a Millar book, and for all the other books featured this week, see the list at our host site, Patti Abbot's blog. 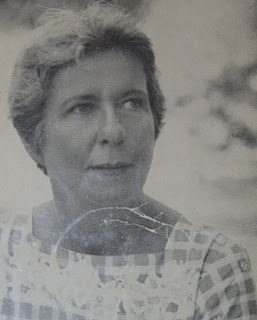