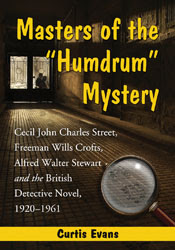 Two days ago I received my copy of Masters of the "Humdrum" Mystery by fellow blogger and vintage mystery scholar Curt Evans.  It's an in-depth study of three unjustly denigrated Golden Age detective novelists - Cecil Street (who wrote under the pseudonyms John Rhode and Miles Burton), Alfred W. Stewart (who wrote as J.J. Connington ) and Freeman Wills Crofts.  It's a true labor of love for Curt who spent the last ten years of his life researching, writing and trying to sell the book to a daring publisher.  Finally it paid off.

The "humdrums" is a derogatory term created by mystery writer and critic Julian Symons in his 1972 study of crime fiction Mortal Consequences (published in the UK as  Bloody Murder). He lumped together several "dull" and "unimaginative" writers of detective novels mostly from the late 1920s - 1930s and derided them for boring characters, flat writing and tepid plots.  As Curt (and many of us vintage mystery bloggers) will tell you -- nothing could be further from the truth.

A close reading of these three men's books will reveal exactly the opposite. Rhode was ingenious in coming up with bizarre murder methods and, when he put his mind to it, concocted ingenious plots with fine examples of logical and scientific detective work. Similarly, Connington was good with tricky plots and in his early books at least displayed an offbeat sense of humor.  Crofts was the genius of the alibi and the timetable and he loved to write detective stories about trains, boats and ships at sea.  In Masters of the "Humdrum" Mystery Curt discusses in detail the best books by these writers and proves Symons to be biased and snobbish in his dismissal of them as "dull" writers.

And now you can own a copy!  It's published by McFarland & Company, a publisher of mostly academic non-fiction books, and can be purchased directly at their website.  They offer an oversized paperback edition or an eBook version. Or you can try amazon. Since it comes from an independent academic press the price is a bit steep at $49.95. Unfortunately, the book is not offered at any discount prices online. But for those who are truly interested in learning more about these three writers and their fertile imaginations I say it's worth every penny.
Posted by J F Norris at 10:53 AM