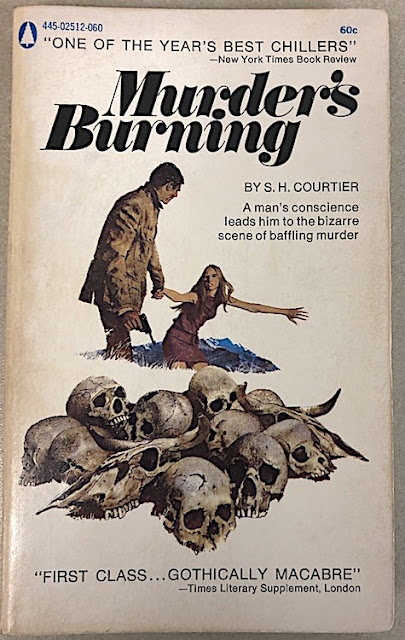 Stewart Hamilton revisits the site of a devastating fire in Murder’s Burning (1967) Several years ago fire raged over an Australian ranch destroying multiple homes, killing livestock, and claiming the lives of eight people including Hamilton’s friend Pete Carruthers. Two bodies were never found in the ruins and Hamilton feels compelled to literally rake over the past in search of clues to the fire’s origin and what happened to the two missing men.

The story is a mix of two first person narratives and follows the style of many epistolary murder mysteries of the 19th and early 20th century. As Hamilton narrates the bulk of the story interspersed are reminisces of letters Carruthers wrote and sent to his friend when Hamilton was living and working in New Guinea. So we have Hamilton in the present revisiting the past via Carruthers’ first-hand accounts in the letters. There is some detection on Hamilton’s part as he digs and rakes through the five year old debris at the site of the fire. But ingeniously many of the clues to the multiple mysteries are to be found in Carruthers’ letters which are filled with richly detailed anecdotes and intensive character studies and psychological probing. Carruthers, who worked as a schoolteacher at the station school, we learn was fascinated with the people he met and lived with and was something of an armchair detective of the soul.

The book gives some insight into how Australian ranches – or stations in the local parlance – are run highlighting the advanced firefighting methods and various escape plans always hovering in the minds of people who live with the threat of wildfire on a daily basis. But was this vast and destructive conflagration really a wildfire? As the story progresses more and more evidence turns up to suggest that the fire was set intentionally. Hamilton is sure he knows the identity of the arsonist but the real mystery, besides what happened to the bodies of Wallace Shelton and Saul Leguier, is why the fire was necessary. He begins to formulate theories and comes up with several conspiracies dominated by an overarching conspiracy of silence about why the fire was set and what happened to the missing men.

A running theme of the book is “Sheltonian madness” a phrase used to describe the eccentric and wild thinking of Wallace Shelton who owned one of the stations. Apparently all the Sheltons had a tinge of madness in them which leads many of the survivors Hamilton talks with to believe that Shelton destroyed his own property. Subplots involve arranged marriages in the Shelton family; crazed criminal Rory Corbett, the local pariah and a scourge on the community; and naïvely flirtatious Lothario, Billy Chad, who has been handing out cheap jewelry with juvenile inscriptions of love to various women. All these stories and people complicate the main plot and lead Hamilton in various directions as he searches for a motive for the arson. 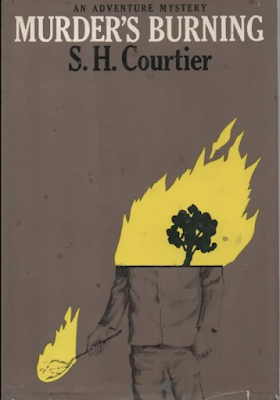 Even more unusual than the Australian setting and the multiple storylines of the many families living in an around the station is the macabre twist that dominates the story around the last third of the novel. Hamilton uncovers a secret passageway behind the ruins of a fireplace hearth on the Shelton property. After descending a small stone staircase Hamilton finds an underground labyrinth where eventually he discovers something that one would expect from a 18th century Gothic horror novelist. Believe me you will not be rolling your eyes or groaning in disbelief but gasping in horror once you learn what Hamilton finds in the cavernous rooms beneath the fire ravaged ranch. All I can add without ruining the novel is that the large one word blurb plastered on the rear cover of my paperback edition -- “Grisly!” New York Times -- is an understatement.

As much as this bizarre touch was completely unexpected and a little over-the-top it made for a truly thrilling finale. And the ultimate surprise reveal of the lone survivor of the fire who has been living underground for years was the icing on the cake. I was not only led down the garden path by Courtier and his expertise in employing dual narrators I was more than pleased that the Gothic excesses ultimately all made sense and explained almost all the mysteries that Hamilton uncovered during his dredging up of the past.

The recurring motif of “Sheltonian madness” also comes to dominate the story. We learn that the madness is both figurative and literal and affects several of the characters, not just Wallace Shelton. If the reader is wise enough to read everything in the book (as I repeatedly mention one ought to do with any book) ) then the Acknowledgment that serves as a brief foreword to the novel will have prepared the reader for an unusual plot element towards the hair-raising finale. I did read the two sentences that precede the story, but had almost forgotten about it by the end. And then I remembered and muttered to myself, “Oh, there was supposed to be something about insects in this!” 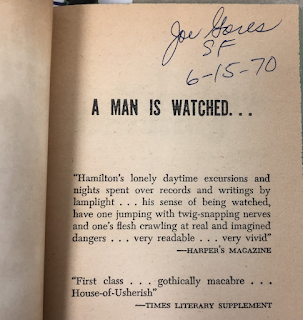 Sidney H. Courtier’s superior debut detective novel The Glass Spear (1950) was previously reviewed here back in 2014 and is very much deserving of a reprint. Murder’s Burning, written 17 years later, is just as good for a variety of reasons, but it does have a rather slow burn until Hamilton discovers the secret passageway. Then it kicks into high gear and makes the trip to the end all the more exciting. I have more reviews of Courtier’s books coming in the fall. I think his books surpass Arthur Upfield’s as some of the best of Australian crime writing in giving readers unfamiliar with the land Down Under excellent insight into Australian culture, climate, geography and sociology.

TRIVIA: Oh! one final note that only true book collectors and rabid mystery fans like me will appreciate.  My paperback copy was previously owned by Edgar award winning American mystery writer Joe Gores (1931-2011).  He signed the book and dated it (see photo at right). The SF, I surmise, means San Francisco where he bought the book. He also lived there much of his life and that noir drenched city of both fiction and real life is where his own private eye character Dan Kearney lived and worked.