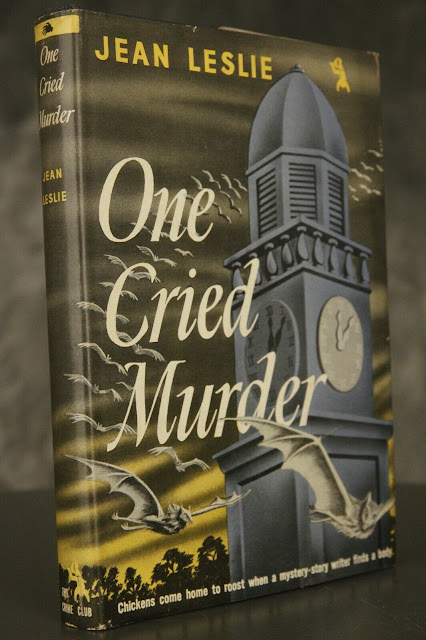 It's too bad that the striking cover illustration at left for this debut mystery novel by Jean Leslie, and the introduction to her decades long association with Doubleday Doran's Crime Club, is no indication of the story within. One Cried Murder (1945) has nothing to do with a horde of bats invading a town nor does it feature anything vaguely resembling  Gothic motifs. The story could have done with a few macabre and outre touches. But as it stands it is still one of the best academic mysteries I've read by any American writer of this era, including the many academics who hid behind pseudonyms and wrote mystery novels set on university campuses. In One Cried Murder Professor Peter Ponsonby makes his first appearance in what would be a three book series and turns amateur sleuth when faced with the apparent suicide of a psychology professor at a small university somewhere in California. This is one of the few academic mysteries of the WW 2 era where I got any inkling that the writer actually was a teacher (Leslie was a psychology fellow and taught for a while early in her career). The detail of university politics, the hierarchy of the deans and the faculty and how they influence and affect the various departments and division heads rang 100% true. I say this having worked in academic medicine for the past 24 years.

The only reason Ponsonby, an English professor, gets involved with the psychology department is because he wanted to talk with his friend Marshall d'Arcy, a child psychologist who was noticeably absent from his office on the day of Ponsonby's visit. In trying to locate d'Arcy Ponsonby enters the office of Prof. Wagner, a psychology professor of German heritage, and finds the man dead from a bullet wound to his head.

The gun it seems was astoundingly used as a prop in a variety of psychology experiments. Yes, a real gun, not a toy gun, not even a replica of a gun. A real gun. I guess that's another sign of the extreme changing times. I was flabbergasted that teaching professionals would allow a real gun to be used as a prop and handled by students in an experiment when a replica, or even a photograph of one would serve the purpose. The experiment is not crucial to the plot but is explained in detail and there is no reason why a real gun is necessary at all. [It's just a novel, I know. I'll calm down.] In any case, this gun used a prop, is never loaded during the experiments. But -- of course -- there is a box of bullets stored with the gun and anyone had access to both gun and bullets. It is kept stored in an unlocked supply closet which was covered by only a curtain. When Ponsonby finds the box two bullets are missing. He had no time to examine the gun and assumes that the second bullet is still loaded in the gun.

Suspects are many and the motives start to pour in when Ponsonby discovers that Wagner was an unethical psychologist who used confidential medical files to blackmail former patients. There is also some discussion as to the cabal of foreigners -- mostly German and Italian heritage -- who live within close proximity of one another and keep their offices just as close. Ponsonby toys with the idea of a conspiracy of Axis spies on the campus but this is soon dismissed as absurd by Mara Mallory, a secretary in the psychology department. She accuses the English professor of allowing his imagination to get the better of him. You see, Ponsonby is also a writer of murder mysteries. His most recent novel, rather popular and selling well, has a silly alliterative title. And Mara, the sassy secretary, pops off the percussive title with this derisive exclamation: "The Poison Pen Puzzle by Professor Peter Ponsonby, Purveyor of Pulp. What a comedown!"

Peter and Mara have a Benedict and Beatrice relationship that blossoms into a sleuthing partnership (albeit begrudgingly on Mara's part) as well as a cocktails and dancing partnership. He convinces Mara to allow him access to her boss' files and in return he'll take her out for a night on the town. This romantic subplot is handled with some wry humor, a sophisticated game of literary quote dropping, and a heavy dose of sexual innuendo the likes of which I've never encountered in any Crime Club novels. Jean Leslie seems to have taken a lesson from her hardboiled contemporaries when it comes to expressing the male libido and does so with relish. At times it gets to be a little much like when Ponsonby listens to one of the oversexed psychology faculty members talk about his hobby of watching the co-eds wearing skimpy gym costumes at archery practice outside his office windows. "Do you like legs?" he asks while "grinning offensively" to which Ponsonby replies, "I like legs, but I prefer them a pair at a time." 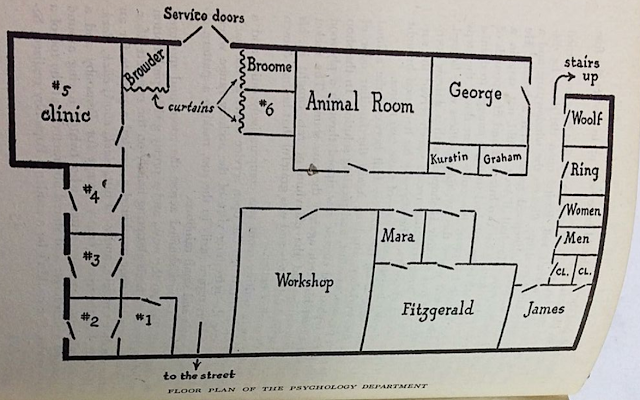 Leslie's plot meanders at times and she can't seem to make up her mind if she wants the book to be about the burgeoning romance between Peter and Mara or if she wants Peter to stick to his initial decision to match wits with his own creation, French criminal psychologist George Bouchet.  When Peter is left to his Q&A sessions with the various teachers, students, faculty wives and others Leslie displays some fine work at creating characters. The scenes with Drs. Ring, James, George and the graduate student Kurstein are highlights in the novel.  A mystery woman Ponsonby encounters in the waiting room near d'Arcy's clinic and dubs the "star sapphire woman" for the brooch she was wearing also provides him with some intriguing information about the staff.  As Ponsonby delves further into his snooping and questioning the list of blackmail victims grows, motives multiply and he inadvertently stumbles onto an undercover FBI operation which seems to validate his conspiracy of German spies among the faculty.

I enjoyed this book even if it took me three times as long to read it as it should have. The rambling nature of the story is crammed with red herrings and minutiae that prove in the long run to be pointless. Still, Leslie was clearly having fun with her story and her characters.  When Peter's mom appears it was like having a cameo by the British actress Frances De la Tour show up for some grandiosely arch comic relief. Agatha, his mother, is a radio personality with a cooking and housekeeping tips program. She also happens to have stopped by for a spontaneous chat with the wife of a faculty member. That chat comes in very handy in clearing up some alibi issues. It's characters like Agatha, Dr Ring, R.H.J. James and others among the supporting cast that will be keep me coming back for more in Jean Leslie's mystery novels.

I'll leave you with this one quote I thought was telling about how college life and college teaching in America has not changed one iota.  Dr Ring ,the self-confessed "hack professor" and the most senior member of the faculty int he psychology department has this to say about his survival and long lasting tenure:  "If I do no good I also do no harm. It is not my wish to call myself to the attention of the administration. I might also add that by the same token I never flunk a football player."