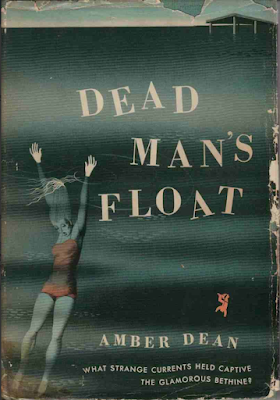 Set in a summer resort town on the shores of Ogg Lake Dead Man’s Float (1944) deals with the macabre drowning death of Bethine Coit who was married to ineffectual Chester a travelling salesman who sells dental supplies. Bethine was a notorious flirt with all the men at the resort when Chester is not around. And sometime when he is. It all looks to be a horrible accident but Max Johnson and Abbie Harris think someone deliberately sent Bethine to her watery grave.

Our narrator is Alberta “Abbie” Harris who lives with her two middle-aged sisters, Lily, the oldest, and Maggie, the fattest. Their nephew Bill Hunt, son of deceased sister Carrie, is staying with the Harris sisters while he studies aeronautics at a local college and awaits his military assignment. He’s 21 years old and newly enlisted in the army.

Neighbor Max Johnson is responsible for Abbie becoming an adult Nancy Drew almost against her will. Knowing full well that Bethine never swam, hated to get wet, in fact, despite enjoying parading around in her bathing suit Max is convinced that someone took Bethine out on a boat and did her in on the float then disposed of her body in the lake. He has already nosed around looking for her missing skiff and found some odd signs of disturbance on the float. During the annual sailboat regatta Max falls off his boat because someone has cut a jib rope. He nearly drowns during the boat race and is rescued in the nick of time by his sailing partner Bill. It seems someone is not too happy with Max and his amateur sleuthing. But that doesn’t stop him from enlisting help from Abbie to snoop around in the Coit home. He wants he to look for anything that may indicate someone wanted Bethine dead. Maybe she was blackmailing someone. The reason she and her husband turned up at Ogg Lake (presumably somewhere in upstate New York, Dean's home state) is all kind of fishy to Max. They’re not at all the camping, fishing and swimming types at all.

Abbie enters the Coit home through sheer luck, does her Nancy Drew bit and finds some intriguing letters and documents referencing the Harris family finances. Just as she is about to leave she’s shoved down the stairs and blacks out from the fall. When she regains consciousness the letters and documents she had in her hand are gone and a dead man is on top of her bleeding from a fatal head wound. It’s Chester. Looks like someone definitely had it in for the Coits. 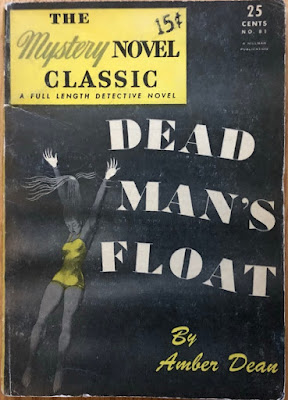 The novel is teeming with characters and the first three chapters are dizzying in trying to keep all the neighbors and their children straightened out. We are told who is a local and who is a renter. When the renters are introduced the renters we are also told who owns the cottage (unnecessary info as it has nothing to do with the plot at all). A coterie of college girls have rented one cottage and they intrude with their chatter and nonsense every ten pages or so like the German tourists flitting in and out of the action in Night of the Iguana. They finally disappear after the second murder takes place. Took a while for me to figure out just who I should be paying attention to.

Max is married to a woman named Mommie (!) and they have three impish girls who figure in the plot. But Dean chooses not to give any of these little girls names. They are instead referred to as the oldest, the middle one, and the littlest one. Why don’t they get names? Especially since they are the ones who discover Bethine’s body. The “littlest one” has a larger role than the other two and figures in a scene with Abbie that leads her to discovering a secret in her sister Lily’s sewing basket. Very odd that none of these children gets a full identity with a name.

I liked Dr. Custom, another in a long line of flippant coroners with an irreverent sense of humor that devotees of vintage crime fiction ought to be familiar with. We’re actually still stuck with them on TV crime shows on both sides of the Pond. Still, Dr. Custom is a welcome addition to any scene he appears in bringing a much needed dose of black humor to the sometimes heavy-handed goings-on.

Dean’s frequent ponderous and obvious metaphors don’t do her otherwise fertile imagination real justice. She has the chops for challenging mystery plotting, but her choices when it comes to figurative language are often obvious and flat, at least in her debut novel.

Despite these minor quibbles this is a nicely done mystery with quite a few surprises in its finale. Dead Man’s Float was Dean’s first mystery novel for the Doubleday Crime Club and she went on to have a rather prolific career. She wrote sixteen more books over the next 30 years. Abbie Harris appears in seven of those books. The titles are listed below.