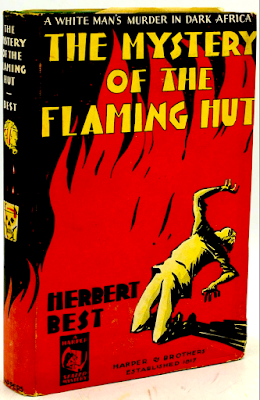 This may be the first, but not the last, Moonlighter who is also a one hit wonder mystery writer. And it may also be one of the best novels to read about pre-WW2 era Africa in these days of diversity programs dominating arts institutions, academia and municipal government as well as the anti-racism worldview. The Mystery of the Flaming Hut (1932) is a fine detective novel that not only enlightens about Colonial Britain in West Africa it sheds light on a culture of dignity, respect and humanity.

Though the book opens on Christmas Day this is far from a typical holiday detective novel. Gift giving and celebrations are mentioned only in passing as the story opens with the gruesome death of Culver, a mining company accountant who apparently through his own negligence dies in a fire that engulfs his home. The newly installed District Officer John Balance is put in charge as both an investigator and coroner due to the lack of British police in the Nigerian village of Mafun. The suspicious death of a white man automatically falls to British authority and the local African government can do nothing but stand by and assist with what little they can offer. In such a rural area lacking in police presence, modern equipment and modern techniques Balance is forced to resort to good old-fashioned common sense, observation and logic. Readers will be reminded of Holmes and other Victorian and Edwardian era fictional detectives as Balance examines the ash of the destroyed hut for clues, even to point of examining in detail some cigarettes and tobacco as Sherlock himself would do. Often Balance calls on the innate skills of villagers like Shamaki who is an excellent tracker, superb at reading the meaning of broken twigs and gnawed on leaves, but by his own confession at a loss to understand the importance of a white man clue like cigarette tobacco.

From the African elders Balance learns that Culver was a libertine, not at all the respectable man that make up most of the workers at the Mafun Mining Company. Though he was supposed to leave the village to travel south to meet his fiancée for a Christmas Day wedding Culver was known to frequent the brothels on the outskirts of Mafun. He was also seen beating his servants and a stray dog he supposedly adopted as a pet. Balance—once again like Holmes who he is surely modeled after – dons a disguise and infiltrates the brothel in order to slyly question Mariamu, the prostitute Culver was last seen with She provide some further insight into the truly dark character of Culver who more and more is looking like a person that several people wished dead -- both Africans and white men.

In one of the novels more original twists Best has provided John Balance with one the most unusual of Watsons – Hatasu, an orphaned teenage girl who acted as one of Culver’s servants but was viewed more like a foster daughter by most of those in the mining company and small set of wise observers among the native villagers. She offers some sharp observations of her own and fills in a character portrait of Culver that conflicts with what Balance hears from the men. Seems that Culver was a complicated man with many faces and personas.

Adding to the mystery of Culver’s strange death – he was possibly shot and then the house set on fire to cover up the murder – is the fact that Culver’s servant John of Asaba (aka Dan Boyi) has fled apparently with a large amount of money that was either given to him or stolen. When John is finally caught through some expert detective work the reader gets to see how African justice works in the most fascinating part of the book – a tribunal run by the village government headed by Al Kari, the overlord of Mafun. 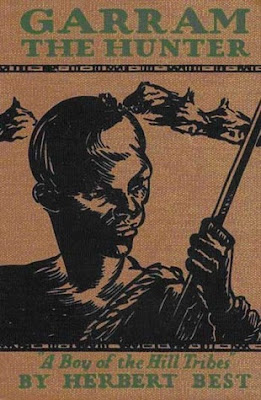 The book is dominated by Balance and his interactions with mostly African characters, but there are two telling scenes with British characters. One is with Mrs. Winchester who came running to Culver’s hut while it was on fire shouting to save him. She undergoes an intriguing questioning in which she plays cat and mouse with Balance dropping hints but never giving away her secrets. The other scene is with Paige-Thomas, a tall, elegant “star prospector and mining engineer.” Both of these sequences are key to Balance proving murder did occur, the motive for the murder and the identity of the killer.

Best succeeds in modelling his novel on the finest Holmesian style of detection, but fails to hide his murderer from plain sight. A lengthy section in which one character delivers a heavy handed philosophical monologue on honor and discipline not only reveals the motive for Culver’s murder but gives away the ending of the entire mystery. I made a note that this had to be the solution and I was correct.

Best crushes myths about the noble savage and the subjugation of Black native peoples in a colonial government. The Nigerian characters in some respects are more complex and better delineated than some of the British characters, many of whom come off as stock characters and archetypes. Best, I think, is trying to dispel the romantic exoticism of Africa by showing these people to be human and flawed. Their culture comes through clearly without patronizing the people, their laws emphasize truth and justice, and he adds a variety of Hausa words translated within the text and dialogue to enhance the flavor of an authentic Nigeria of the 1930s. 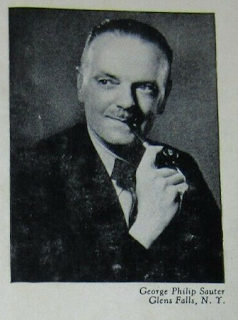 Oswald Herbert Best (1894-1980) held a degree in arts and law from Queens’ College of Cambridge University. After serving in World War 1 he lived for twelve years in West Africa working in the British Civil Service. There he met his wife Alenna Champlin when she was working as a journalist. Prior to the publication of The Mystery of the Flaming Hut, his only detective novel aimed at an adult audience, he had written a children’s book Garram the Hunter: A Boy of the Hill Tribes (1931), about a boy living in Nigeria. For that book he was nominated for the Newberry Award. Urged on by his wife, a successful children's writer herself, Best continued writing for children often collaborating with Alenna who sometimes illustrated his books using her artist's pseudonym Erick Berry. Best wrote only three novels for adults and devoted most of career to children’s non-fiction and juvenile novels. He and his wife settled in upstate New York near Lake Champlain where they eventually ran a dairy farm and small apiary that produced honey. He ended his writing in the 1960s with a short series of four juvenile mysteries featuring Desmond the Dog Detective.
Posted by J F Norris at 12:00 AM