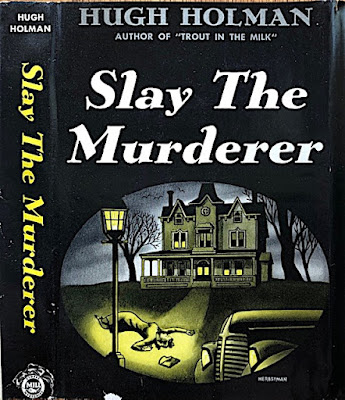 THE STORY: Owner of a wholesale produce company is found stabbed in a locked room in his house. Also found in the room is an unconscious man named Charles Cole. It is believed Cole who recently had a violent argument with the dead man stabbed him while drunk then passed out. Seems entirely cut and dried. But Cole claims innocence and amnesia; he has no idea how he ended up drunk in the room. Why is the room locked with all windows shut tight? And what is that odor of bitter almonds about the corpse?  The autopsy reveals the corpse was poisoned and stabbed after he was dead. Sheriff Macready investigates hauling Cole to every interview (rather than keeping him locked up in jail) and eventually discovers the startling reason for William Deahl's murder and the real killer.

THE CHARACTERS:  Slay the Murderer (1946) is the second appearance of Macready in a short series of only four novels. Being a Southerner he has a colorful way of speaking, peppering his speech with unusual exclamations, a trait seemingly inspired by the detectives of Holman's close friend John Dickson Carr. He's matter-of-fact, but open minded and willing to listen to Charles Cole's story of his innocence. He's trusting enough (and thoroughly unconventional) to lug Cole around the city with him as his suspect in custody. As a result Cole, desperate to clear his name and discover how he came to be drunk and passed out in a locked room with a corpse, becomes a sort of Watson. The suspects are often taken aback at being questioned by Cole but with Macready's insistence all those being interrogated answer both the sheriff and his suspect #1. In addition to his quirky Southern expressions (see QUOTES) Macready offers up frequent bits of sage advice to Cole and others.  Like this eccentric view of arguments: "You know in every argument there's three sides, not just two--the side you're on and the side the other feller's on and the right side. Shucks, folks around here have got enough sense to know you can't decide right off the bat what's right and wrong. The law's like that too."  This tidbit is adressed to his rival for the office of Sheriff -- Lucius Watters. It's election time and Watters is hoping that by not arresting and charging Cole Macready's incumbent status will be tarnished. Watters is eager to expose Cole as the real murderer.

The Deahl household is filled with unusual characters that help liven up the otherwise routine proceedings. Frances Deahl is the blind matriarch who suffers from a delusion that her two sons are impostors. She claims they committed suicide after the death of her husband and were replaced with fakes. Macready is sure she speaks in a metaphoric language and uses this delusion to protect her from having a complete nervous breakdown. She was truly in love with her husband, but once he died under suspicious circumstances (a heart attack after being on a fishing trip with his sons) she lost her sight and a bit of her mind. Still, she rules the household with her iron will and tart tongue.

Her sister, Alicia, suffers miserably. Nursing her old wounds of being dumped by her lover who chose Frances as his wife rather than her Alicia retreats into a mousy personality. She is presented as the archetypical Victorian biddy still living in the past, surrounding herself with mementos of a bygone era and clinging to fond memories of years long passed. She acts as more of a servant to her sister than a real member of the house. Holman tersely describes her as fragile and dainty, a woman who "speaks as if anesthetized."

The two Deahl sons, Willis and Ralph, had an interest in taking over Deahl Wholesale Produce and seemed willing to do anything to control the company. The investigation will reveal a sinister d side to the two brothers and involve a surprise second murder related to their scheming.

Also living with the Deahls is Rupert Pater, a lodger Frances allows to move in in order to get some extra income. Pater seems to be a red herring character, he is a wannabe poet who lives in a room furnished with a "wispy and delicate" motif. We get to read one of his awful poems , an example of the worse purple prose. Holman seems to be hinting that Pater is less than a man, an ineffectual dreamer with his mind trapped in an anachronistic imagination and perhaps implying that he's gay. We are meant to dismiss him entirely because of his less than masculine attitudes and aspirations. But Rupert is in the story for a reason. Hidden motives will certainly be unearthed. Macready is not too quick to strike off Rupert Pater from the list of suspects especially when he discovers a photographic laboratory in his private bathroom and a missing bottle of cyanide from the collection of chemicals.

INNOVATIONS:  Holman, primarily a literature professor known for his scholarly work on American South writers, uses language and grammar to effect throughout the novel. Twice Charles notices an "improvement in grammar" -- more often a shift in the use of literate vocabulary -- as an indication of Macready's "internal excitement." Macready also talks about the use of grammar when he is interrogating suspects as a tool in understanding character and possible deceit. Another unusual detective skill, very much tied to the Golden Age, is graphology which comes into play at one key moment in the story. The analysis of handwriting as an understanding of personality was a common feature in plots of vintage crime fiction. You don't often encounter it these days as it has been replaced by the techno-wizardy.

This is a strongly plotted mystery with multiple unusual motives among a motley group of suspects. Digging into everyone's past reveals dozens of secrets and skeletons come tumbling out of myriad closets. It is difficult to pinpoint those which are crucial to the solution of the crimes. In that regard the book is a success. The identity of the killer for me was a true surprise and the motivation is sound for the character if not truly mindboggling in conception.

Sadly, the locked room aspect pales in comparison to the rest of the plot. Despite Holman's professed love of "constructors of complex and elaborate plots and impossible crimes" no Carr-like ingenuity lies behind the reasoning or the method of how the murder room became locked. The locked room is used to ill effect in trying to add an extra twist in the finale. Holman didn't really fool me with that twist. However, the real identity of the killer did. For that reason I'd say this was a well constructed mystery with a satisfying conclusion.

QUOTES:  "By the sacred horns of the hoot owl I can get myself into some of the confoundedest messes."

"Son, I'd rather try to sell quick-freeze units to South Pole penguins than try to sell that yarn to a self-respecting jury."

Dan Comfort, the coroner: "The odor was enough. Odor of bitter almonds mean anything to you, Mac?"
Macready: "Confound it, Dan, first thing I know you'll have me consulting 'the little gray cells.' So it was cyanide, huh?"

They listened...with the indifference of a sleepy opossum, and set off on the search of the house with the enthusiasm of a hound dog tracking its second polecat.

Jed's laughter had all the humor of a Gestapo trial.

THINGS I LEARNED:  Macready talks about someone who went "to the worst dive in these parts and [lost] four dollars and eighty cents playing Kelly pool" late in the book. Had to look that one up. Kelly pool is an old-fashioned term to describe a game of pool similar to Eight Ball. Each player chooses at random one specific numbered ball, keeps this secret from the other players, and must pocket that ball during the game. According to a Wikipedia article the key difference between this game and Eight Ball: "Kelly pool is a rotation game, which means that players must contact the lowest numbered object ball on each shot first until the opportunity to pocket their own is presented." Here's some more tidbits taken from that entry: "Reportedly invented by Chicagoan Calistus "Kelly" Mulvaney in 1893, kelly pool was a popular game during the early to mid-20th century. Mentions of it were at one time common in US newspapers, often painting it in a negative light as its play was considered a stronghold of gambling. Authorities in various parts of the United States at times called for a moratorium on the game's play. Until 1964, in fact, playing the game was a fineable offense in the state of Montana."

I'll be doing a Moonlighting feature on Hugh Holman when I finish reading the other mystery novels featuring Sheriff Macready. For now I'll forgo the author section. Holman is rather popular on the vintage crime blogs these days thanks to TomCat, who is slowly usurping me as the expert on obscure mystery writers, who reviewed Up This Crooked Way also with Macready. This was shortly followed by a review of Holman's debut (without Macready) Death Like Thunder at The Green Capsule blog.
Posted by J F Norris at 9:42 AM