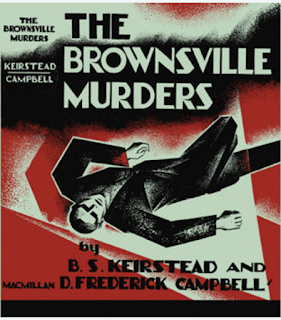 What a surprise it was to learn that this excellent detective novel was the work of a young economics professor who was teaching at the University of New Brunswick when it was published. Burton Keirstead (writing as B. S. Keirstead) co-authored his first and only novel with D. Frederick Campbell, who apparently was also working at the university though I was unable to uncover anything about him. The Brownsville Murders (1933) is an engaging and fascinating blend of police procedural, a novel of rural Canadian life, a satire of naive thinking, and an eye-opening account of the RCMP in 1930s Canada. Keirstead seems to draw from American pulp writers and the nascent detective novels just beginning to become popular as million copy bestsellers. Well reviewed in the American press The Brownsville Murders showed promise for the young man who wrote only one other detective fiction work published only in serial format, but would go on to make a name for himself as one of Canada's leading economists of the early 20th century.

The Brownsville Murders is set in the titular Canadian farming village sandwiched between Woodstock and Fredericton in the province of New Brunswick. In the opening pages we meet a young couple engaged to be married who while driving to Fredericton come across a body in the middle of the road. Upon close inspection they see it is a man who has been shot in the head. When they go for help and return to the accident scene the body has disappeared. A search ensues and soon another person is dead. And then another!  Only 35 pages have passed and already we have three bodies, one missing, and two young people terrified to have been caught up in a true murder mystery. 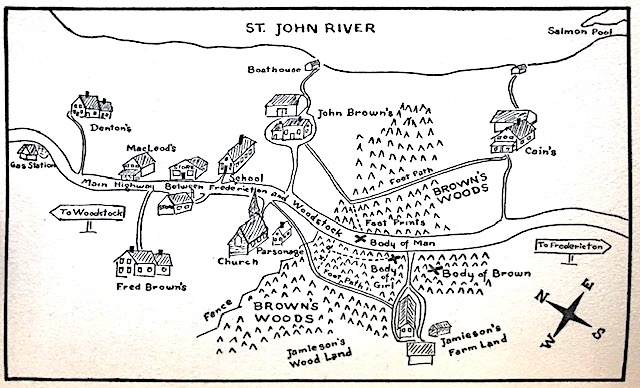 Brian Woodworth, the young man driving the car that night, we soon learn is a law student finishing his studies and employed in the office of Lawyer MacPherson whose first name is never mentioned. Macpherson is our narrator and the unofficial detective of the novel. This is a blend of both amateur and professional detective work. Inspector Eccles of the RCMP will eventually take charge of the investigation aided by MacPherson and Sgt. LaTour. Interestingly, MacPherson notes that the young sergeant is the more capable of the two policemen. He describes LaTour as a man of "sheer native wit and shrewdness and insight." In contrast Eccles is an an impulsive and fanciful thinker who MacPherson believes relies too much on imaginative ideas "full of bad psychology." Eccles is certain that two people were responsible for the three murders and the vanishing of two corpses. He cannot envision that one person could carry out all the activity necessary in killing three people and moving the bodies.

The man found dead in the road is identified after painstaking questioning and turns out to be a local named MacLeod with a reputation as a womanizer. In one of the most intriguing fictional inquests I've ever read the Brownsville murder case reveals a torrid lover's triangle heightened by impassioned jealousies and rampant cruelty. We meet a sadistic Fundamentalist Christian farmer who according to gossip beats his daughter. A feeble minded "half-wit" confesses his love for MacLeod's wife and talks of his passion for late night salmon fishing. Finally, we learn of the life and work of the stranger in town, a writer and illustrator named Stephen Jamieson.

Canadian law allows for a police counsel to question witnesses at a coroner's inquest.  In The Brownsville Murders the police counsel is Mr. Des Barres who is determined to implicate Albert Denton, the "half-wit fisherman" who was seen wandering near the site of the shootings. This eyewitness is Mrs. MacLeod, the object of Albert's obsessive affection and also the wife of the murdered man in the road. As MacPherson watches the inquest unfold from the gallery he is suspicious of every word uttered by Mrs. MacLeod. Is it possible that she is perjuring herself in order to escape suspicion and help Des Barres build his case against Albert? 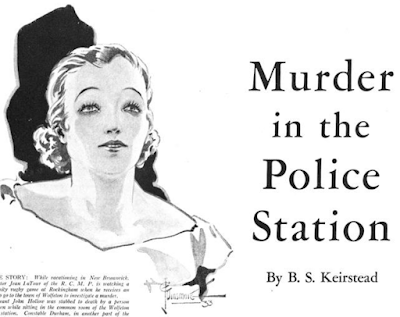 Poor Brian Woodward is also badgered on the witness stand during the inquest. He is advised by MacPherson to keep his temper under control and not allow himself to be bullied into an outburst. MacPherson is sure that Brian will be manipulated and exploited by the shrewd and controlling police counsel. It's all Brian can do to keep from criticizing Des Barres' methods rather than simply answering his questions. At times he cannot speak, rather he sits seething in the witness stand.

The inquest ends with a circumstantial case built against Albert who has been painted as an obsessive stalker angry with MacLeod and protective of his "love" for Mrs. MacLeod. Albert's father is worried that the police will soon arrest Albert and hires MacPherson as his lawyer. The case becomes one of MacPherson trying to save Albert from trial and determined to help Eccles and LaTour find the true murderer of the three shooting victims.

I was completely enthralled with this novel. It's an impressive debut work and all the moreso because the writing duo managed to fool me.  The James M. Cain-like atmosphere of jealous lovers and volatile extramarital affairs was so convincing and so neatly laid out with multiple suspects I was completely taken in. But all the while Keirstead and Campbell had another angle with clues cleverly planted so off-handedly that I dismissed them entirely as red herrings. Much to my embarrassment (and later delight) these supposed red herrings were the real clues leading to the solution. In fact, one bit of investigation about a shack on one of the farms near the initial murder and roadside accident should have been so obvious to me that I was kicking myself for overlooking it.

Burton Seely Keirstead (1907-1973) was born in Woodstock, New Brunswick and was the son of Dr. Wilfrid Currier Keirstead, a pastor for the United Baptist Church and a noted professor himself. Dr. Keirstead taught philosophy and social sciences at University of New Brunswick where his son would eventually study and teach.

Burton would choose economics over religion and philosophy and his studies included a stint as a Rhodes Scholar in Oxford where he was involved in the Adelphi Club, the Dialectical Society and the Lotus Club. While at Oxford he often entertained students in a salon in his private rooms. One of the most famous salons he arranged included a talk by fellow student E. M. Forster, famed novelist of A Passage to India, A Room with a View, Howard's End and Maurice.

Over his lengthy career as an academic and economist Keirstead taught at University of New Brunswick, Dalhousie University's Institute of Public Affairs, McGill University and University of Toronto. He was a visiting lecturer at MIT, University of Arizona and The University of West Indies in Jamaica where he studied and eventually published a book on freight rates and the federal shipping service. He published several books on economics throughout his life notably The Economic Effects of the War on the Maritime Provinces of Canada (1944), The Theory of Economic Change (1948), Canada in World Affairs, Vol. VI (1956), and Capital, Interest and Profit (1958). 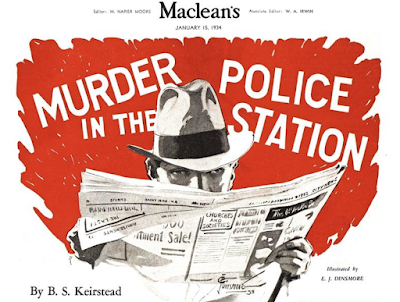 While The Brownsville Murders is Keirstead's only published detective novel it is not his only contribution to crime fiction. The editor of Maclean's magazine after reading an enthusiastic review of Keirstead's debut mystery novel in a New York newspaper met Keirstead in person to discuss his fiction. Together they came up with a plan to publish Keirstead's second idea for a detective novel as a serial. The first part of Murder in the Police Station appeared in the January 15, 1934 issue. MacPherson, Brian Woodward (now a partner in MacPherson's firm), Inspector Eccles and LaTour all appear in this second work. A nice surprise is that after his success with the Brownsville case LaTour has been promoted to the rank of Inspector in the RCMP. Murder in the Police Station was published in six bi-monthly installments from January through April 1934. The entire serial is available to read at the Maclean's website. I hope to read the whole thing and write a review of that obscure fiction work soon.
Posted by J F Norris at 9:44 AM