FFB: The Mystery of the Boule Cabinet - Burton Stevenson 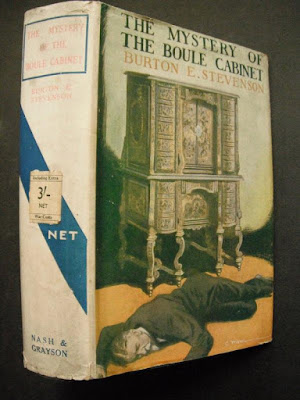 THE STORY: An error in shipping sends a 17th century ornate cabinet supposedly created by André-Charles Boulle to the home of Philip Vantine, wealthy collector of antiques. He did purchase a Boule (sic) cabinet but it is not the extravagantly designed masterpiece that is delivered to his home. Within hours a strange Frenchman is pounding on Vantine's door wanting to talk to him about the cabinet. And just as quickly the mysterious visitor is found dead, a strange wound on the top of his right hand. This is only the first bizarre death that occurs and the beginning of a baffling mystery that will lure other strange visitors to Vantine's home, including a master criminal in search of a secret hidden within the cabinet's intricate compartments.

THE CHARACTERS: The Mystery of the Boule Cabinet (1912) is the fourth detective novel to feature Lester, the narrator lawyer and his friend ex-policeman turned newspaper reporter Jim Godfrey. The two apparently appear together in most of the mystery novels with Godfrey and three earlier adventures are referenced repeated, but thankfully without spoiling any of the books. Though Lester -- whose first name I never saw on any page of this novel -- does some interesting theorizing and mild detective work it is Godfrey, the hard-nosed ambitious reporter with lots of police skills under his belt who is the detective in all the books. For a newspaper reporter he oversteps himself an awful lot, takes the lead when police officers ought to be in charge and follows a police sergeant named Simmonds around to nearly every crime scene offering his input and expertise. He also has it in for Commissioner Grady, a cop Godfrey apparently worked with years ago and in the reporter's opinion deserves no respect. In fact, there has been a concerted campaign to discredit Grady in the press. Godfrey inserts insinuating remarks in his articles in the hope that Grady will be ousted from his position of authority. 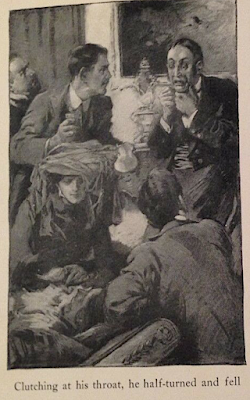 But this is no novel of politics and police bureaucracy. Rather, it is a highly melodramatic, incident filled adventure novel with some top notch detective work from Godfrey, Lester and Simmonds. Some French police also make a late entry into the book when the wild crimes and bizarre murders attract the attention of a master criminal who dubs himself "L'Invincible."

Stevenson has a fondness for every character in the book. Everyone gets their moment in the spotlight from the frantic maid who disguises herself to gain entry into Vantine's house to a greedy cousin of Vantine who intrudes on the house after the second death hoping to learn he will inherit a sizeable legacy from his cousin. Supporting characters are described with as much detail and given as much attention as our intrepid detective team. More than enough sinister events lead the reader to suspect everyone, including servants, of being up to no good. At one point I was convinced that this would turn out to be a book where "the butler did it." Stevenson, however, seems thoroughly influenced by the popular French mystery writers of his time like LeBlanc, Leroux and Allain & Souvestre -- authors of the Fantomas series which was still very new to Americans in 1912. Despite Stevenson's dedication to an initialed friend dubbed "a fellow Sherlockian" The Mystery of the Boule Cabinet is mostly an action adventure thriller.  The novel is so steeped in a variety of crimes and action set pieces, not just the insidious and puzzling murders, that is was slightly disappointing to learn that it all leads to yet another master criminal from France. 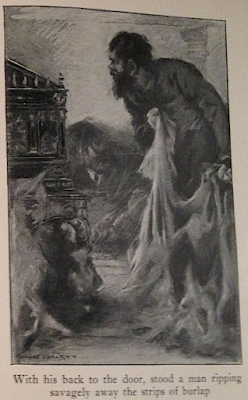 INNOVATIONS: The most interesting part of the book is the murder means. It should come as no surprise that the gorgeous antique piece of furniture that gives the book its title will feature prominently. Indeed, it is almost a character in its own right. Readers are sure to be reminded of Conan Doyle's "The Adventure of the Speckled Band" when the talk turns to fang like wounds. I myself was thinking that venomous spiders might be involved. The truth is even more bizarre. Lester and Godfrey know the history of France and they allude to the infamous period during Louis XIV's reign known as L'Affaire de Poisons. When the Borgias come up in conversation the cabinet begins to take on a sinister persona. The two men turn to fanciful romance and imagine the worst. Lester comes very close quite early on in the story to working out the deadly method employed to kill the two men foolish enough to tamper with the cabinet.

THINGS I LEARNED: The Bertillon measurement system of classifying criminal types is mentioned as a way to perhaps verify the identity of the unknown Frenchman who dies in Vantine's house. I was unaware that this classification system was so vast. Stevenson has Godfrey tell the NYC police that all criminals in Paris have their measurements taken and filed away. Prior to the widespread use of fingerprints the Bertillon system was the most popular way to keep track of repeat offenders in law enforcement. Alphonse Bertillon, French criminologist, not only developed this early form of criminal anthropometry he also invented the mug shot.

When some valuable items discovered late in the novel need to be stowed away in a safe deposit box prior to being taken with French police back to Europe Jim Godfrey suggests they take a trip to the Day and Night Bank on Fifth Avenue because "it never closes." Once again Stevenson made a mix-up with a name. The true business name was the Night & Day Bank which was located on 5th Avenue and 44th Street. At the time of the novel's publication this 24 hour bank, a brand new concept in American banking, was only six years old. Founded in 1906 the Night and Day Bank was unique for its safety deposit boxes that were stored in a naturally lit chamber with high skylights in order to attract the business of jewelers and gem merchants. They also operated a separate woman's banking service. In the first year of business the bank posted over $3 million in deposits and had 7,000 customers. For more history on the pioneering Night & Day Bank see Dollars through the Doors: Pre-1930 History of Bank Marketing in America (1996) by Richard German.

Lester talks about how the Boule cabinet once belonged to Madame Montespan and how that association makes him think of poison and poisoners. I fell down the rabbit hole again when I ty entered her name in to the Google search box and learned her full name was Françoise-Athénaïs de Rochechouart de Mortemart, Marquise of Montespan, royal mistress of Louis XIV who was linked to the notorious ring of poisoners and murderers involved in the Affair of Poisons. Lester seems to believe that the Marquise was a wicked woman who practically killed all the victims herself. Contemporary historians, however, have found little evidence that she was involved at all. The real villainess was a fortune teller and practitioner of black magic called Catherine Monvoisin (aka "La Voisin") who butchered babies, committed black mass rituals, and poisoned hundreds of people as a murderer for hire. There are dozens of books about this period in French history but I resorted to the Wikipedia page. I hope I got the facts, not the legends.

THE AUTHOR: Burton Egbert Stevenson (1873-1962) began his life in writing as a boy when he built his own printing press and using discarded type from the newspaper where he was a newsboy created his own privately published newspaper. He attended Princeton where he worked in the university printing office using his skills as a typesetter to help finance his way though school. While in college he worked for The New York Tribune and The United Press as a college correspondent. Eventually he veered away from journalism and found his calling in library work. In 1918 he founded the American Library in Paris "to act as a center of information about the United States." He became its director in 1925 and stayed there for five years. Between 1903 and 1939 Stevenson wrote thirteen detective and mystery novels, six featuring Jim Godfrey and Lester whch are listed below. In addition to his fiction he was the author of numerous compilations of quotes and poetry including  The Home Book of Verses (1912),  a massive 4000+ page tome still in print at the time of his death, The Home Book of Quotations (1934), The Home Book of Shakespeare Quotations (1937) and two other books of proverbs and Biblical quotes.