FFB: The Ghost It Was - Richard Hull 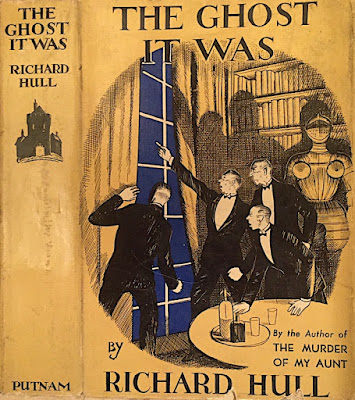 THE STORY: Amberhurst Place has a history like all homes that date back to the Tudors, including the bonus of two ghosts. Brothers and rivals for the affection of a lovely lady, according to the legend. James Warrenton, the latest owner of Amberhurst Place, is not too happy that the legend has been publicized in a local newspaper. But as a staunch believer in spiritualism he is more than eager to witness his spirits when they fortuitously materialize on the parapets of the abandoned tower on the far end of Amberhurst. All this occurs the very night he invites all his nephews to his home for a dinner party. A second apparition follows on another night with more dangerous results when one of his nephews is found dead at the foot of the tower dressed in an elaborate costume having impersonated one of the ghosts. Was the first apparition as false as this second? And was there a real person also seen in the tower or was that a genuine ghost? Inspector Percival, a coroner, and the surviving members of the Warrenton clan all turn sleuth to find out if ghosts can murder.

THE CHARACTERS: The Ghost It Was (1937) is populated with the lively Warrenton family led by irascible Uncle James who can barely tolerate his four nephews and one niece let alone his patronizing butler Rushton. Hull is a master of this kind of dry British humor and this is a proper satiric send-up of the old Golden Age convention of the heirs battling out for attention and hopefully a huge legacy from the ancient patriarch. James is far from ailing but any reader will know that he is far from safe, especially when the black sheep of the Warrenton family turns up on the doorstep of Amberhurst Place in the guise of an investigative journalist. Gregory Spring-Benson, is the loathsome nephew without a shred of decency and he makes no attempt to hide his contempt for everyone including Uncle James. His interest in the ghosts oddly seems genuine and he is most definitely up to no good. He spends an awful lot of time chatting with Rushton, the butler and they work out an intriguing switch of rooms prior to the first ghost visitation. Arthur Vaughn, however, is onto Gregory and is determined to expose him as a wannabe reporter and an opportunist. He wants Gregory out of the picture, out of the house and out of Uncle James' will. There are a lot of ghost plots in the works. When one of the plots backfires and an impossibility presents itself in just how a second human could have been on the tower the police and other heirs begin to suspect foul play.

Gregory and Rushton tend to steal the spotlight. From the start Gregory seems to be the protagonist, an anti-hero of sorts and we know nearly everything he is plotting. However, the narrative will sharply detour many times and we will get multiple shifts in viewpoint as the plot gets ever more complicated. Rushton, the overly articulate, pompously grammatical butler is supercilious to such an extreme he becomes hysterically absurd. Reading his elaborately constructed sentences and watching as the police routinely complain over his vocabulary only adds to the comedy.

Everyone has the shining moment with the possible exception of Aunt Julia, the only bogey character, who seems to have no real purpose other than as the token dowager and appears in three brief scenes. Even mousy Emily, a bookish dishrag of a character bullied and ridiculed by all the men comes into her own when she witnesses a second crime right after her own bit of totally unexpected derring-do. Bravo for Hull for tossing in this bonus scene of surprising heroics from the least heroic member of the cast. And a hearty "Brava!" to Emily for risking her life in the process. 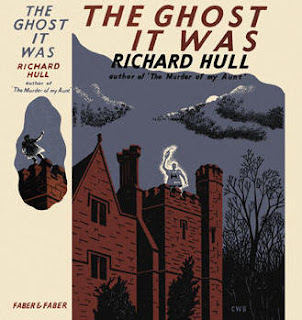 INNOVATIONS: Hull is mostly known for his experiments in the inverted detective novel and The Ghost It Was is definitely a melding of inverted and traditional detective novel. While there are not many clues as to whodunnit there are indeed more than enough clues, both physical evidence and psychological clues, as to the howdunnit. Really the fun of this novel is in trying to figure out not who the culprit is (that is sadly rather obvious) but just exactly how poor Arthur met his demise and the equally baffling manner in which the second victim was killed. This is Hull’s homage to John Dickson Carr — ghosts, haunted tower, two impossible crimes, all told with wit and farcical comedy and an ample amount of genuine creepiness.

Interestingly, in the final wrap-up the real detective of the piece (a very cleverly done surprise) delivers all the reasoning without stating outright who the killer is. The reader has to glean from how the policeman delivers the information who the true guilty party is. I've come across gimmicks like the writer naming the killer in the final sentence of the book, but this is the first time I've encountered a detective never announcing the name of the killer in a declarative sentence, rather only implying guilt and culpabiilty of the person responsible for all the violence and scheming.

QUOTES: The novel is overloaded with witty comments, juicy barbs, veiled insult humor, nasty quips, and a long section that ridicules wine snobbery that I thought was hysterical. I could quote pages of the book, but I'm picking one perfect exchange to encapsulate Hull's mastery in satiric writing.

"Don't try to be sarcastic, Gregory, it only makes Uncle James more angry."
"Thank you, Henry. I am not angry. I am only being just -- or at any rate," he went on hurriedly, becoming aware of the fact that the last sentence was quite incredible, "justly irritated." 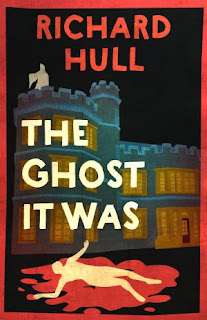 EASY TO FIND? The Penguin reprint of The Ghost It Was is fairly easy to find in the used book market and copies tend to be moderately and fairly priced. The first editions, either the US or UK, are extremely scarce. Those with dustjackets are exorbitantly priced. One UK first (Faber & Faber, 1936) with a DJ in remarkable condition is tagged at US$1500 from a Canadian dealer. The good news a new edition will soon be released by Agora Books (photo of cover at right), the same outfit that brought you eBook editions of two of Hull's other early crime novels Keep It Quiet and Murder Isn't Easy. Paperback and digital editions will be on sale on October 12, 2018 in the US, most likely earlier in the UK.
Posted by J F Norris at 12:00 AM