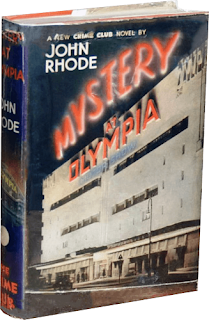 THE STORY: Nahum Preshore was not particularly fond of cars so when he told everyone he was going to the Motor Show at the Olympia people were more than surprised. Surprise turns to shock when they learn he has dropped dead in a crowd of people near the Comet Car display. The autopsy reveals no obvious cause of death, but suspicion is raised when his maid is taken ill the same day. She's been eating his special stock of olives and the olives when examined turn out to have been poisoned with arsenic. Was Mr. Preshore poisoned too? Superintendent Hanslet takes over the case and uncovers a bizarre conspiracy and nearly nabs the wrong suspect. Leave it to Dr. Lancelot Priestley, professor of mathematics and wizard at solving baffling murders to reveal the real murderer.

THE CHARACTERS: Like many of the John Rhode mysteries Dr. Priestley plays only a minor role in Mystery at Olympia (1935). He listens with rapt attention to the story of Nahum Preshore's sudden death and becomes more and more intrigued when it is learned that there have been several attempts on his life. Hanslet, however, is the main detective in this case and he dominates the narrative. Aided by several policeman, lab technicians, and physicians he digs through the curious incidents involving a tainted inhalator, the shotgun wound on Preshore's leg, the poisoned olives, and the strange rules about no one using the rear entry in Preshore's house. He come up with some unusual theories portions of which prove to be true. There seem to be multiple people who wanted Preshore dead. Which one of the several suspects was successful in achieving that goal?

Was it Philip Bryant whose name keeps cropping up in all the interviews? Bryant was Preshore's lawyer and was privy to the contents of his unusual will. Was it Betty Rissington, Preshore's niece who was to be the primary heir to his estate? Could it have been George Sulgrave, a Comet Car salesman who talked Preshore into attending the auto show? Maybe Mrs. Sulgrave, a friend of Betty's, who seemed to be secretly plotting something with Betty? What about the servants in the Preshore household? Mrs Markle, the housekeeper was also in the list of legatees in Preshore's will and as a childhood friend she was to receive a sizable inheritance. Maybe Odin Hardisen who had a feud with Preshore over an unpaid loan of £1000. And what of Micah Preshore, the long lost step-brother who was supposedly living in Argentina? Had he returned to England without anyone knowing? Who was that woman that was overheard talking with Preshore in his forbidden study? No one was allowed in Nahum's private retreat and yet a lace handkerchief was found there one morning indicating the visit of a female with expensive tastes. Preshore's life was filled with secrets and motives for murder. Someone did him in and it takes some clever interrogation and gathering of evidence to ferret out the real culprit and uncover the real motive for his murder. 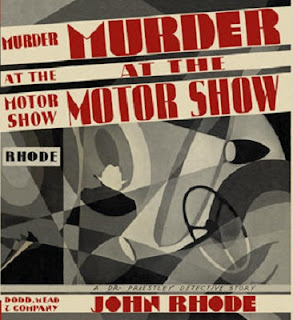 INNOVATIONS: There is always something ingenious or clever in a John Rhode detective novel. In this case (as with a few others) the story involves multiple attempts to kill a character and make the death look either accidental or non-violent. The idea of poisoning medicine is a detective novel staple, but only John Rhode would think of an attempt to poison someone with carbon monoxide by placing zinc and calcium carbonate in a inhalator. The chemical reaction of the two when heated would produce the gas and lead to suffocation. The actual murder method (which I will not discuss) is equally bizarre. Only when Dr. Oldland comes across an unusual citation in a forensic medicine textbook do the detectives consider the most likely means of Preshore's death.

Other than Rhode's trademark of bizarre murder methods Mystery at Olympia is rather a standard detective novel. It's one of Rhode's most straightforward tales, filled with a cast of interesting characters (the liveliest of the bunch being Odin Hardisen), a plethora of excellent clues and a satisfying if not so stellar finale. After all the complexities this tale of murder boils down to a fairly simple way of doing someone in and a time worn motive that should have been guessed at from the start.

Readers unfamiliar with Rhode would do well to start here. It's an excellent introduction to his style of detective novel with just the right amount of his trademark technical lectures and abundance of odd murder means. If Priestley only shines in the finale that is no real drawback; his solution and accusations are succinct and brilliant. This relatively early book (number 21 out of over 80) is one of the better in the very long series that tend to be middling to awful in his later career.

EASY TO FIND? Glory hallelujah, is it ever! After decades of no easily available John Rhode books Harper Collins have managed to reissue three of the Dr. Priestley novels and they are available in either paperback or digital editions. The new reprint of Mystery at Olympia was released for US purchase just this month after having been first released in the UK back in April. Those of you looking for a vintage copy will be hard pressed to locate the original UK edition; it's a true rarity. And keep in mind that the book was published under a different title in the US. Murder at the Motor Show was the revised 1936 title in order to alert American readers where the book was set and that cars and automotive engineering, frequent topics in Rhode detective novels, were featured.