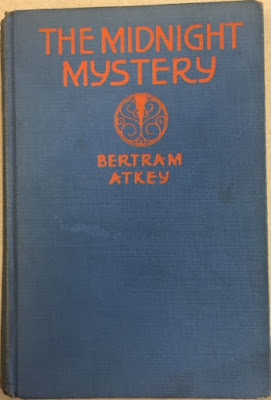 THE STORY: Prosper Fair, vagabond sleuth, has set up his current temporary home and campsite in the forests of Wolf's Head. Shortly after building a fire and settling in for the night he encounters a mysterious figure clothed only in an animal skin, mounted on horseback, and galloping past him in a fury. Prosper's pet dog chases after the man on horseback and returns with an object in his mouth apparently dropped by the fleeing rider. Upon closer inspection Prosper discovers a prehistoric ax made of flint and a rough hewn wooden handle, the stone blade is bloodied. Has murder been done in this dark midnight forest?

THE CHARACTERS: The detective of The Midnight Mystery (1928) is perhaps unique in all of Golden Age detective fiction. There is no other man like him. Prosper Fair is in actuality the Duke of Devizes, a devil-may-care aristocrat who has shirked his title, renamed himself, and left his home Derehurst Castle in favor of life on the road as a vagabond. He is accompanied only by a trio of animals: Plutus, his three legged terrier; Patience, a dutiful and affable donkey; and most surprisingly of all, Stolid Joe, an elephant rescued from a travelling circus. Needless to say Joe draws more attention than either of the other two animals and least of all Prosper himself.  When Prosper tries to set up in the forests of Wolf's Head it is Joe that Hambledon, the forest ranger, is most concerned with. He immediately asks for Prosper's camping permit which he produces with a flourish. Again it is Joe who arouses the curiosity of passer-by Major Giles Wakeling who strikes up an instant friendship with Prosper while discussing the nature of elephants and their innate humanity. From the Major Prosper learns of young woman named Mollie O'Mourn who was found murdered in the forest and some other intriguing incidents that involve the  horseback figure he saw the previous night. Prosper Fair cannot help but try to track down the whereabouts of the mysterious night rider, learn his identity, and determine whether or not he is responsible for the girl's death.

The whimsical nature of the story is further carried out in some of the characters' names of who sport such monikers as Lady Crystal Sheen and Detective Inspector Meek. Often the names are ironic badges as in the case of Meek who is anything but.

We are also treated to a gallery of sinister supporting characters who seem to be up to no good including a Japanese manservant, a stern and homely housekeeper, and a nasty male secretary recently fired from the employ of tortured playwright Alan Bryne. one of this group seems to be running a blackmail and extortion ring, but which of the three is it?  Or are all three involved in a conspiracy?

INNOVATIONS: The Midnight Mystery is an unusual mix of whimsy and Gothic trappings. Atkey does a remarkable job in making Prosper Fair seem like a man out of time, a sophisticated tramp who seems to have stepped out of the 18th century and set foot in the mad world of post World War I. His speech may be antiquated, quaint and endearing, but his observations are wholly serious. He fully recognizes the horror of what took place in the forest of Wolf's Head. The place names in fact add a macabre element that serves to heighten the Gothic atmosphere. In addition to Wolf's Head, we visit a lodge called Tufter's Wait, and the whole of the story is set in a village named Normansrood. Atkey never misses an opportunity to add an extra level of creepiness. Alan Byrne, the playwright, is frequently overcome by strange cataleptic fits which leave him frozen in terror, unable to speak or move. The night rider is described as "a creature of darkness" and a "skin clad specter". 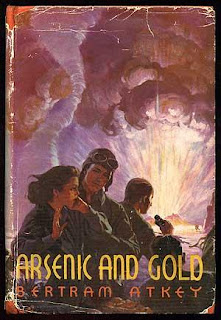 The detective work is reminiscent of late 19th century sleuthing. Prosper has plenty to mull over with footprints and hoof marks, a variety of different colored horse hairs found tangled in bushes, and the odd collection of axes that turn up at various points in the novel. After the flint ax is found, one with a carved obsidian blade turns up, then one of bronze, and finally an iron and steel ax. The night rider seems to be working his way through the evolution of weaponry according to the progression of prehistoric ages. Prosper notices this intriguing rather obvious fact but Meek pays no attention to it dismissing it as fanciful nonsense. Each man is focused on different aspects of the various mysteries with Prosper poring over the more bizarre elements while Meek homes in on the hardcore criminal activity. Both methods will lead to the surprising truth of who killed Mollie and the secret identity of the animal skin wearing night rider.

THE AUTHOR: Bertram Atkey was a prolific writer of novels and short stories with a career lasting close to forty years. He is probably best remembered as the creator of Smiler Bunn, the gentleman adventurer, who appeared in numerous stories and novels from 1912 to the late 1930s. Prosper Fair, his second detective creation, had a much smaller life appearing in only a handful of stories and only three novels. Atkey's nephew and son-in-law Philip Atkey (he married his cousin and Atkey's only daughter) was also a mystery writer. Under his own name and his better known pseudonym Barry Perowne, Atkey's nephew carried on the adventures of both Smiler Bunn and Prosper Fair in a short lived series of stories. All these stories were published in The Saint Mystery Magazine between 1960 and 1965. 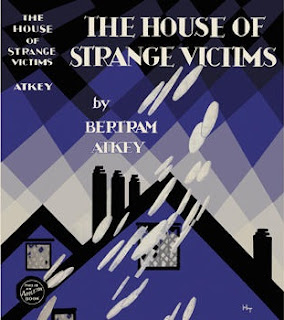 EASY TO FIND?  The Prosper Fair books are extremely scarce and of the three titles The Midnight Mystery appears to be a true rarity. There are currently no copies for sale from any online bookselling site I looked at. Arsenic and Gold (1939) (shown above), featuring Smiler Bunn, with exactly ten copies currently offered for sale seems to be the easiest Atkey mystery book to get a hold of.