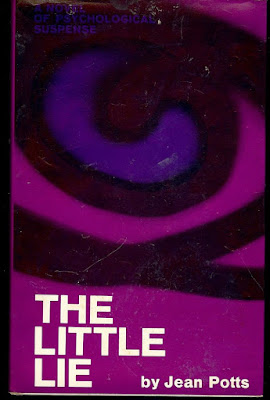 When asked where her fiance Chad has gone Dee Morris tells a lie, The Little Lie (1968). A fib really. She says he's gone to California on business. And because Dee has a habit of telling these little lies and truly believing in them, depending on them to construct her own personal reality, to protect her preciously cultivated status in town, that one little lie leads to more lies. A fib becomes a grand deceit and soon Dee finds herself desperately trying to reconstruct the truth without ever being found out. She can't admit to the lie, she is incapable of admitting to mistakes. And that's her fatal flaw. A plane crash leads everyone to believe that Chad has perished along with all the other passengers and Dee admits to it. But what will happen when everyone finds out that Chad is really alive? To what lengths will Dee go to make sure that her version of the truth remains undisturbed and undiscovered? Dee learns that not everything is in her control and that nothing can ever be predicted.

So many great works of literature have been created out of the concept of "the bigger the lie the more it will be believed". The Children's Hour (1934) by Lillian Hellman being one of the earliest and still one of the finest examples of the power of rumor and lies to change the viewpoint of all people those rumors touch while simultaneously bringing to light deeply hidden secrets. Few writers, however, have been challenged by the concept of the dangers of a fib. In an age when we are confronted with lies by people in power on an almost daily basis, by leaders who manufacture their own reality and wholeheartedly believe in that falseness, The Little Lie reminds us of the dangers of trusting too easily and more perceptively the concept of the liar as manipulator and puppeteer. Like our own misguided and narcissistic President, Dee Morris is trapped in a private world of her own creation, utterly self-absorbed, concerned only with her carefully crafted worldview, her status, and her tenuous happiness. Everyone else be damned. Woe to anyone who crosses her.

Even the slightest interference will only add to the snowballing trouble. The elderly schoolteacher Mr. Fly, a well-intentioned interloper who only wants the best for everyone. His habit of eavesdropping (a favorite plot device of Jean Potts) and gossip leads to a deadly confrontation between Dee and her sister-in-law Erna. Mr. Fly appears to be some sort of adult male version of Pollyanna trying to spread happiness wherever he goes, but only succeeds in augmenting trouble and bringing about ruin instead. In dealing with his intrusions Dee only becomes more desperate. Desperation makes her intractable. Her every action is about self-preservation. If people won't stop talking and gossiping then she will have to take matters into her own hands and permanently silence them.

The Little Lie is perhaps Jean Potts' finest contribution to genuine domestic suspense. In Dee Morris Potts has created one of her most unnerving and deeply disturbed characters. The story hits all the right notes, focuses on the lives of women and their husbands (or in the case of Dee, her intended husband) with the perceptive plot gimmick, a seemingly innocuous lie, serving as the catalyst for all that follows. The final pages are fraught with tension, a neatly noirish touch in the revelation of Dee's most creepy secret, which leads to a near operatic mad scene. Like the best of noir we know everything was leading to this explosion, that Dee was doomed when she uttered that little lie. And it's perfectly fitting in the last paragraphs that it is Mr Fly, the foolish interloper, who discovers Dee finally broken, caught in the web of her own creation, surrounded by her final act of violence with nothing left to do but collapse in a pitiful ironic fit of laughter.
Posted by J F Norris at 10:06 AM