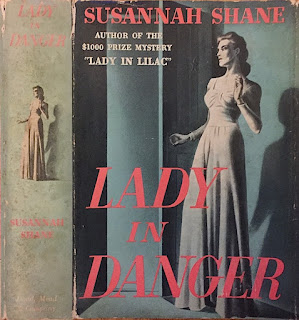 THE STORY: "The Countess de Pontarlieu requests the pleasure of your company at supper, Sunday evening, June 4th, on the yacht Aguila, South Shore Anchorage, Long Island." So reads the invitation sent to ten guests of a motley group ranging from a stage actress to a gag shop owner keen on practical jokes. Someone wants them dead. After a failed attempt at poisoning the entire dinner party with crepes Suzette laced with rat poison, the killer stages a series of fatal accidents. One by one the group is being killed off. But why? What on earth do a Broadway actress, a gas station attendant, a playwright, a lawyer, a farmer, and the five others who barely know one another have in common that would mean they all need to die? Christopher Saxe, urbane playboy and amateur sleuth, digs into their past and discovers a secret pact dating back twenty years and missing $100,000 stolen from a train that someone wants all to himself.

THE CHARACTERS: Lady in Danger (1942) marks the debut of Susannah Shane's series character Christopher Saxe. Similar to Spike Tracy, another amateur detective the same writer created under her own name, Saxe is yet another independently wealthy man-about-town who discovers he has a knack for solving crimes. We get his entire history of his previous cases, his relationship with the Manhattan police, and the origins of his friendship with his best buddy Buzz Batterson. Saxe is a likeable, astute young man with a strong sense of righting wrongs and unmasking criminals. Batterson is the typical wisecracking comic relief sidekick you find in many of these mystery novels of the period.

Because of the large cast of characters and the high body count we don't get to know many of the cast very well until after their deaths. Mark Priestley, the writer and playwright, is one of the first victims and we catch him at work with his loyal secretary in only one scene. His file of story ideas both published and unpublished along with the manuscript for the new play he is writing became crucial to Saxe's understanding of why the dinner party took place and why the killer is targeting the guests. Seems that Mark has a penchant for basing his stories and plays on real life events and he is not good at disguising the sources.

The lady of the title at first appears to be actress Juliet Brinig whose latest starring vehicle is bringing her attention and accolades in the Broadway community. Her role as a willful septuagenarian who marries late in life is the talk of the town and people are comparing her work to Helen Hayes as Queen Victoria. Juliet is only in her 40s but she is completely convincing as the title character in The Matriarch Marries. A subplot which eventually ties into the main story concerns Juliet's true identity and her mysterious rise seemingly out of nowhere as a leading lady in theater. But there is another woman who just as easily might fit the role of Lady in Danger. She is Miss Tuttle, Priestley's secretary, who Saxe will discover had another role as record keeper for a investment scheme involving all those present at the dinner party on the yacht.

The characters are all well defined, each has a pointed moment in the spotlight, and all of their actions contribute to the solution of the multiple murders. Shane maintains a good level of suspense as each character's many secrets are uncovered further revealing the closely guarded connections that tie them together. Saxe will uncover them all using a combination of street smarts, intuition, and solid detective work. The story is both a crime novel and a literary detective story of sorts as there is a metafiction element involved with Priestley's stories and plays being based on true crimes.

INNOVATIONS: I enjoyed the use of Priestley's stories as the primary clues that lead Saxe to the truth of what brought the ten people together. There are two stories within the novel's story that the reader is privy to and which align with later plot features. It's a clever use of fiction about fiction and it works very well in the context of this novel. Intriguing clues are plentiful as well including a set of golden cigarette cases all engraved with the same cryptic message that keep turning up in the victims' personal effects, Miss Tuttle's unusual coded filing system that relies on ambiguous initials, and Dennis Neville's odd side trip to a Colorado cemetery with Saxe hot on his trail to find out what Neville is up to. Most of this is done in the tradition of a fair play detective novel, but the clues (especially the events related in Priestley's stories) are more like signals of what's to come leading the reader to anticipate the revelation of the not too surprising murder motive. Saxe makes some cryptic remarks like "I had to look up a word in the dictionary" that are also clues to the solution. The word in question is probably one unfamiliar to many contemporary readers and I imagine they too would find themselves drawn to a dictionary for clarification. But we never really know what that word is until Saxe is good and ready to tell us -- in the second to last chapter to be precise.

Surprises, too, are teeming over the course of this rather intricate and complexly plotted mystery. As much as I thought I knew where Shane was headed with her main plot thread she managed to pull the ultimate unexpected punch when it came to revealing the identity of the murderer. The clues were all there and subtly laid out while the more blatant evidence was discussed and mulled over at length. I'm not sure if this was truly ingenious or just a side effect of having such a complicated plot with so many layers and secrets to keep track of. Still, I was impressed and she wins extra points for fooling me.

THE AUTHOR: "Susannah Shane" was the pseudonym and second life for Harriette Ashbrook's detective and crime fiction career. After realizing that her own name was not among the most respected mystery writers (she enjoyed making fun of a handful of middling book reviews) and that she was not a bestselling writer she invented an alter ego. Start from scratch, so to speak. Her first novel as Shane -- Lady in Lilac, a suspense thriller in the style of Cornell Woolrich -- was a huge success winning her the coveted Red Badge Mystery Novel Prize of $1000 and a book contract with Dodd Mead. Lady in Lilac was reprinted in massive quantities by Books, Inc. as part of their "Midnite Mysteries" imprint and to this day is the easiest of the Susannah Shane books to find in the used book market. It was recently reprinted by Coachwhip Press. Why they haven't picked up any of Ashbrook's other well plotted and entertaining books or the remaining Shane novels mystifies me.

Prior to her mystery novelist career Ashbrook was a freelance newspaper writer whose work regularly appeared in The New York Times, New York Tribune and The Brooklyn Daily Eagle throughout the 1920s. She also apparently contributed to the Kiddie Klub Korner as children's advice giver Aunt Jean. This was a column that appeared in the Evening World, another New York paper, also during the 1920s.

Her writing career was cut short when she died in 1947 at the relatively young age of 50. Had she lived longer we might have seen more of Christopher Saxe or even some other series character. For more on Ashbrook see my post on the Spike Tracy detective novels. 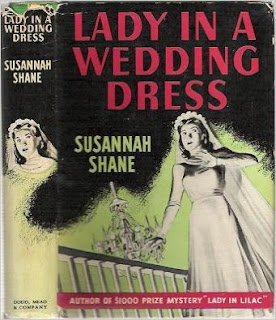 EASY TO FIND? Of her six detective novels written as Shane Lady in Danger is the second most common after Lady in Lilac. I found about ten copies for sale in both US and UK editions. Unlike the last few books under her own name none of the Shane books were reprinted in paperback. One of the other titles was included in a 3-in-1 omnibus as part of the Detective Book Club. If you live in the US you might be lucky enough to find one of the Susannah Shane books in your local library or get it through interlibrary loan. I'd like to see all of Ashbrook's books reprinted. While they may not be stellar examples of the genre they are hugely entertaining. When she was cooking up an intricate plot with neatly planted clues as in the case of Lady in Danger she really did a bang up job with her mystery books.