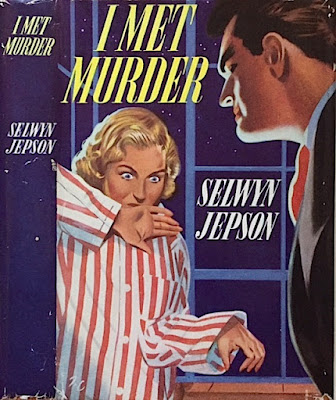 THE STORY: I Met Murder (1930) literally starts off with a bang. On the very first page someone attempts to kill John Arden, prominent sociologist and narrator of the book. The wine glass he was holding shatters and a bullet is found in the wall behind him. All this happens while he and five other guests are sitting at the dinner table during a party given by Hamish Page, wealthy businessman and war profiteer. Page soon confesses that someone had attempted to shoot him earlier in the week and that he has hired a private detective to look into the matter. But the next day someone succeeds in shooting Page dead. Was Arden not the intended target at all? When it is discovered that Page has left his entire estate to Anita Skinner, daughter to a professor of mathematics and a weapons designer, suspicion falls on the young lady. Anita turns to Arden as her confidante and enlists his aid in recovering an incriminating letter in which she had threatened Page. If the letter should be found by the police Anita is sure to be arrested. Then a second person is shot dead making it appear that someone has targeted every person at Page's dinner party. Can the police stop the killer before he makes his way through the rest of the guest list?

THE CHARACTERS: Though John Arden is the narrator he is only a sort of Watson character to the main detective of the book. Inspector English is a by-the-book kind of policeman so often found in Golden Age detective fiction. He has his ideas and is rarely open to having them challenged though he is not unaccustomed to compliment his cohorts' detective skills. George Jupp, the private detective hired by Page, conducts his own investigation parallel to the police one. He shares his opinions with English who on occasion can be startled by his perceptions and will begrudgingly accept some of Jupp's theories. Our narrator Arden is mostly along for the ride offering up his few eyewitness accounts, some perceptive observations, but mostly acting as a sidekick to Jupp. Interestingly, in the final chapters two of the main suspects (and last remaining survivors of the massacred dinner party guests) discuss the series of murders and come up with their own astonishing theory of who the killer might be. It turns out to be not too far from the true solution. In effect there are four detectives and two Watsons over the course of the novel.

Out of the lot of suspects it is Anita Skinner and her father Professor Skinner who are the most fascinating. Anita is the primary suspect who has the most obvious motive for killing Hamish Page. But as the body count continues to rise she is eliminated from the pool of suspects. Her father then draws the attention of the police. Skinner's work in weapons design is constantly being discussed. This gives Jepson an opportunity to make the detective plot touch on topical issues in post World War I era when anti-war movement and disarmament debates were always in the news.

Each of the suspects (and later victims) seems to have been created in order to discuss a "hot topic" of the era. Lady Codrington is a writer of erotic poetry that is deemed too overt for publication in Britain. She is called a pornographer by her detractors and enemies and she seeks to have her writing privately published by a small press based in Paris. Jepson devotes several pages to discussing her work and how it affects her life and how she interacts with the others. Likewise, in creating Lionel Lake, a sanctimonious minister who is suspected of having an affair with the poet, Jepson allows for ample talk of religious hypocrisy with an emphasis an issues surrounding sexuality and fidelity. 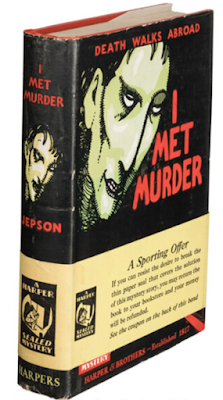 INNOVATIONS: Jepson presents the reader with multiple puzzling murders many of which involve near impossibilities. The most interesting will turn out to be how the killer managed to shoot through the window at Arden without being seen. The whereabouts of the murder weapon causes a lot of consternation as well. Inspector English and Jupp both comment on the numerous varieties of .22 caliber weapons in Professor Skinner's home and the main suspects' easy access to all of them. But they do not manage to find the correct weapon until the murderer actually shows them where it was secreted.

Despite the humdrum style of plotting with the puzzles overtaking the story and a dry prose style heavy on character monologues the overall tone of the book has a very contemporary feel. Characters like Anita Skinner presented as a willful, devil-may-care "bad girl" bordering on a kind of anti-social amorality is more frequently found in books published thirty or forty years after this one written in the late 20s and published in 1930. The talk about provocative sexuality (Anita confesses to having a three-way with two men), erotic poetry and pornography, gun design and weapon manufacturing, and religious hypocrisy all still have resonance for a 21st century reader.

As far as crime plotting goes every one of the murders comes at the most unexpected moments. Even if you know prior to reading (which I did not) that the body count is rather high in this book it is doubtful that you will be able to predict just who is the killer's next target or when in the story each death will take place. In this regard Jepson's novel impresses with its sophisticated construction and brilliant use of suspense. Like many of the early serial killer novels that deal with insanity I Met Murder focuses a bit too heavily on the question of motive and when that appears to be the investigators' stumbling block they begin to see the killing spree as the work of a madman. Nothing could be further from the truth. The motivations when revealed are less the product of an insane mind than they are the work of a popular and paradoxical type of literary murderer found in the late 1920s and early 1930s detective fiction -- the obsessively moral killer.

THINGS I LEARNED: The book is very much about guns, specifically .22 caliber rifles and the bullets they use. This kind of thing can be both fascinating and utterly boring to me depending on how much gun love the author indulges in. Contemporary crime writers tend to get a bit masturbatory about guns and ballistics and it truly sickens me. Here the gun information is necessary to understand the plot and Jepson clearly knows what he is talking about. Thankfully, the gun talk when it comes sticks to basics. The most interesting discussions were on the difference between rifles that shoot bullets and air rifles, how the barrel determines range and distance a bullet or projectile can travel. There was none of the obsessive often pretentious talk that many writers who are also gun enthusiasts tend to throw in. Because the theme of the novel is very much anti-war and leans towards disarmament often the discussion of guns and the ever increasing changes in design to make them more deadly is highly critical.

QUOTES: Inspector English: "I am very glad to have you with me Mr. Arden, on these occasions quite often you produce a useful piece of information at the right time. If I may say so, you have the makings of a deductive mind."

As long as there are Professor Skinners in the world the peacemakers will never succeed in outlawing war; invent an engine of destruction, and you invent a dozen, for you will set rivals at work. To argue with them, to point out their folly, is a certain waste of time and breath and I had long ago discovered the Professor to be particularly impatient of such evangelistic efforts. 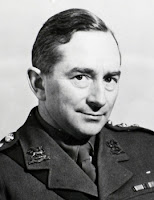 THE AUTHOR: Selwyn Jepson was the son of noted weird fiction and detective fiction writer Edgar Jepson. He is also the uncle of British novelist Fay Weldon. Like his father Jepson began as a novelist but quickly became involved in screenwriting and his career as a scriptwriter often overshadows his life as an author of crime fiction books. By 1930 Jepson had already published eleven books, a mix of crime and adventure fiction, before he was drawn to the world of movie making. From 1930 through 1953 he wrote or adapted over a dozen screenplays. In the 1950s he wrote for the US anthology television series "Rheingold Theatre." His novel Man Running (1948) was adapted for the movies as Stage Fright directed by Alfred Hitchcock. It features Eve Gill (played by Jane Wyman in the movie), the only true series character Jepson created.

But perhaps it is Jepson's life as a British agent assigned to the Special Operations Executive, the arm of British intelligence during World War II that has become his true claim to fame. As his detailed biography on the Fandango website tells us: "Jepson was put in charge of the recruitment and training of agents. His own, most direct task was personally interviewing potential agents. He usually used the name "Potter" in a now well-recounted procedure that took place in a sparely appointed, totally non-descript office in London." His renowned work with the SOE has been recounted in books and movies like Charlotte Gray, Carve Her Name with Pride, and most recently in Shadow Knights: The Secret War with Hitler by Gary Kamiya, marvelously illustrated by Jeffrey Smith. 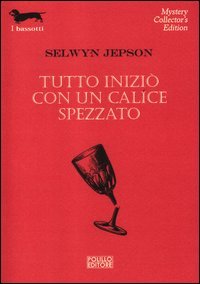 EASY TO FIND? I'll deliver the bad news first. Neither the first US nor the first UK edition are common. In fact, I found absolutely no copies of the UK edition and only two of the Harper & Brothers 1930 edition for sale. The good news is there are many copies available, all of them priced affordably, of the reprint issued by Modern Publishing Company sometime in the 1950s. Exactly when in that decade I haven't a clue because this publisher does not bother with printing copyright information in any of their books. The dust jacket doesn't even identify their own company anywhere! Even better news is that a contemporary reprint exists. But you'll have to be able to read Italian. Polillo Editore released the first Italian translation in 2012 as part of their classic mystery imprint "I Bassotti". Typically for this publisher, the title has been changed and rendered as Tutto iniziò con un calice spezzato (It All Started with a Broken Goblet). I suspect this was done because the original English title is a subtle fair play clue, almost a spoiler, reminiscent of the kind of thing Helen McCloy used to do with her titles.
Posted by J F Norris at 11:30 AM