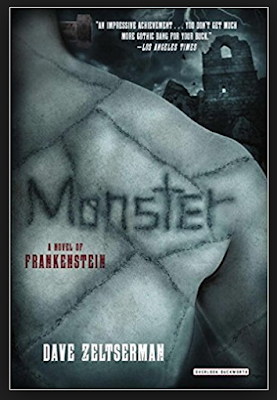 Happy 200th Anniversary to Mary Shelley's Frankenstein! Today marks the bicentennial of the re-release of the novel after its anonymous publication on Jan 1, 1818 and subsequent temporary pull from sale. Shelley's name did not appear on the book until an 1823 edition published in France.

I doubt that those select few who have actually read Frankenstein by Mary Shelley will recall the one page in which Victor Frankenstein describes his initial foray in his quest to absorb all knowledge of natural philosophy. At the age of 15 Victor devoured the occult teachings and arcane books written by Cornelius Agrippa, Paracelsus and the medieval German bishop and alchemist Albertus Magnus. He then describes how he is ridiculed for this immersion in the occult by his professors when two years later enter enters Ingolstadt University to study science and medicine. But Dave Zelterserman did not forget this passage. In composing his spin-off of the tale of monster and creator he took off with this bit of information like a madman fleeing a burning Gothic castle pursued by pitchfork armed villagers.

Monster (2012) is the the tale of Frankenstein told from the creature's viewpoint with Victor Frankenstein cast in the role of sorcerer and alchemist. We learn that the monster is not so much a stitched together body of the best physiques of mortal men but a former apothecarian's assistant who is well versed in physical sciences and chemistry. Friedrich Hoffman is his name and he has sworn vengeance on Frankenstein for what he has done to him. Hoffman was engaged to a marry his beloved Johanna but Frankenstein murdered her and framed Hoffman for the crime who was then arrested, tried and executed in a particularly horrific manner. Then Frankenstein used Hoffman's corpse in his experiment in reanimation while also casting a powerful black magic spell that held Hoffman in Frankenstein's power.

The novel is a fine pastiche of a true 18th century Gothic novel yet also a mash-up of a contemporary noir novel of revenge. You can bet there will be no real happy endings. Zelterserman does his best to replicate the tone and flavor of the Gothic novel's origins with some adept prose style but lays it on thick with horror novel motifs. Hoffman escapes from his prison and sets out to find Frankenstein plotting a revenge that is not so much "eye for an eye" as it is the typical "I'll get you sucker" plot crime fiction fans have read in countless paperback originals of the past and still be being recycled in books, movies and TV. The crime plot is out of place in this overloaded Gothic horror novel replete with Satanists in the woods, supernatural wolves, vampyres (Zeltserman's preferred spelling), black magic spells, and perverse sexual orgies with more than the required debauchery and depravity.

The word depraved occurs repeatedly throughout the story. Monster is clearly meant to be not only a revenge novel but a savage satire on the perversities that pass for thrill-seeking among the soulless and bored. The scenes of human degradation passed off as private entertainments are luckily few. Much of the story is filled with the basic ingredients of penny dreadful shockers of days past with hairbreadth escapes from the numerous villains, several daring feats of rescuing the handful of imperiled women, and an assortment of violent hand to hand fights.

Victor's obsession with alchemy and the occult have so tainted him that he has lost all sight of his former self. Unlike Shelley's conflicted man of science and religion this Victor is amoral in the extreme. Hoffman is not only his creation but his slave held captive with the aid of black magic. In a complete role reversal from his inspiration Zelterserman makes Hoffman the true man of science. using his skills as an apothecarian and his knowledge of chemistry he will succeed in counteracting the magic with a concoction of herbs and chemicals. Later, he also turns the tables on Frankenstein when he steals a page from one of the occultist's secret books planning on using a spell on his creator. The revenge of course smacks of 21st century irony in another nod to noir plotting. 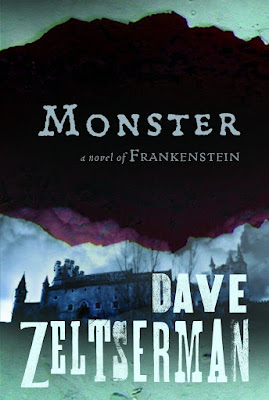 Many readers may be turned off by what seems an inundation of debauchery and Gothic horror. Yet anyone who is familiar with the work of Walpole, Radcliffe, Francis Lathom and Eliza Parsons will recognize that excess is what Gothic novels are all about. German ghost stories and novels like The Necromancer (1794) in fact served as the inspiration for Shelley's novel. With this in mind one cannot help but admit that Monster is one of the more ingenious retellings of the Frankenstein story. About the only thing missing from this story are wicked nuns and corrupt monks and the body of a child found walled up the cellar of an abbey. As an added bonus, now almost expected in a work of historical fiction, there are cameos from real life figures like Samuel Hahnemann (the founder of homeopathy) and the Marquis DeSade himself. Monster may seem like a deluge of horror, wickedness, and unrestrained cruelty but it all rightly belongs there. However, it is not sustained or resolved in the final pages when disappointment and compromise nearly ruin everything.

We learn that Hoffman, unable to age like a human, is doomed to an eternal life. He survives to see the horrors of both world wars, the invention of automobiles and airplanes, and muses on the horror of modern men and their inventions all of which seem like monsters to him. One day he wanders past a bookstore where he discovers a copy of Frankenstein. After reading the book he is enraged by its contents calling it a nothing but lies. Prior to this sequence Zelterserman had pulled off a well researched, but not quite perfect, pastiche of the nascent Gothic horror thriller. When he resorts to obvious preaching on the well flogged topics of man's inhumanity to man, the inevitability of war, and all the rest of it rather than relying on the strength of allegorical meaning in his use of supernatural legends and Gothic trappings the novel ironically loses much of its power and relevance. Hoffman's anger gives way to a resignation and confession as he takes pen to paper to tell the true story of his creation, his victimization and his many crimes all the whole hoping for forgiveness for what he has done. Eliot's lament from "The Hollow Men" -- "This is the way the world ends/Not with a bang but a whimper" -- comes to mind.
Posted by J F Norris at 1:55 PM