FFB: The Clock in the Hatbox - Anthony Gilbert 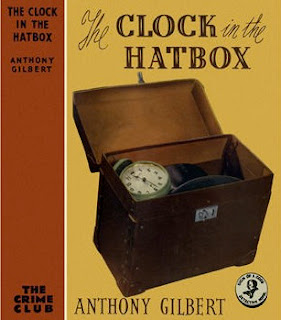 THE STORY: Viola Ross is awaiting the verdict from the jury who are deliberating on her fate in the trial of her husband's murder. Novelist Richard Arnold is the only person convinced of her innocence and he adamantly refuses to budge from his not guilty vote. The trial ends in a hung jury and Richard leaves the courthouse determined to clear Viola's name, spare her the indignity of a second trial, and find the real murderer. But his delving into amateur sleuthing leads to anonymous letters, murder attempts and other unexpected twists of Fate.

THE CHARACTERS: For nearly half the book we have no idea who Richard is. He never tells us his name himself nor does he talk much of his work as a novelist. We have to wait until his fiancée Mary "Bunty" Friar addresses him by his first name. Later a policeman or Arthur Crook himself (I forget which) calls him by his last name. That I thought was very odd from a first person narrator. But then this is an Anthony Gilbert mystery novel and the reader ought to expect high doses of the unusual and oddities galore.

Like Irene Cobb, the first person to confront Arnold on what she feels is his obstruction of justice. She was Teddy Ross' secretary and through a gossipy friend she learned that Arnold was the jury member who was responsible for the mistrial. She warns him that he better not pursue his plans and reminds us all of the telltale clue that gives the book it's odd title. Ross had set an alarm clock and was planning to wake up to conclude some business. The clock never went off and instead was found wrapped in a scarf inside a hatbox. The police and everyone believe the murder did this in order to sneak into the room and kill Ross by smothering him with a pillow. But the murderer foolishly forgot to replace the clock. If the clock had been on the bedside and Ross been discovered dead no murder investigation would ever have taken place. The death would have been ascribed to Ross' heart condition and age. Miss Cobb knows that only Mrs. Ross was at home and is most likely the guilty party. When Arnold starts receiving anonymous letters he is sure that Miss Cobb is continuing her vendetta.

Among the other possible suspects is Ross' son Harry who had a shaky relationship with his father. Teddy Ross had hired a private investigator to follow his wife because he was convinced she was having an affair. Mrs. Ross had been giving Harry money to help with his schooling and future career which angered the old man. In his rage he accused her of more than financial assistance and consorting with her stepson in a sordid romance. Did Harry and Viola plot do in Ross in order that they could use his money as they wished without his interference?

Mentioning any of the other characters would spoil the bizarre developments that take place. Suffice to say Arthur Crook does figure into the complicated case when Richard Arnold seeks out his help. There is some unique detective work throughout the story, but the true appeal in this novel is Gilbert's flair for an unusual treatment of a familiar plot that mixes courtroom mystery, detective novel, pursuit tale and Hitchcockian suspense into one mindblowing crime novel 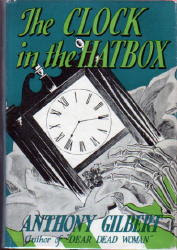 INNOVATIONS: The more I read Gilbert the more I think her contribution to the genre is her unusual genre blending technique. I haven't read a single novel yet that is anything like a formulaic traditional detective novel that presents a mysterious death, myriad suspects and a detective who proceeds to find out the who, what, and why of the crime. In every book the story borrows elements from several of the subgenres within crime fiction and skillfully melds them, folding and interweaving so many apparently disparate features into what turns out to be an intricate storyline that connects seamlessly. No loose threads are left hanging and you are sure to be left gasping at the many ironic twists in a Gilbert plot. I could go on to mention that this is rather a landmark mystery novel that for some reason is NEVER mentioned in the many studies of the detective novel. I thought Death Knocks Three Times (1949) was a tour de force, but The Clock in the Hatbox (1939) is also worthy of that laudatory label. In fact, I'd go so far as to say that this novel is just plain ballsy. Lucy Malleson had nerve when she wrote this one and she pulls it off rather well. The entire structure of the novel is an innovation from the opening chapter that gives us a judge's summing up, the mention of the tell-tale clue that is the murderer's undoing, and the labyrinthine plot that follows as Richard Arnold does his best to free Viola Ross from the hangman's noose.

QUOTES: "[Y]ou can't force him to do something he hates. It's terrible -- I mean, it's so fatally easy to make the wrong decision, and once it's made you have to abide by it forever."

"You know what Sherlock Holmes said."
"About eliminatin' all the impossibles and takin' whatever's left, however improbable, as the only answer? Yes, I know. I'm thinkin' of havin' that put up over my desk. It'll save a lot of trouble. It must be nearly as popular as 'Laugh and the world laughs with you.'"

"Innocence costs more than a lot of people would like to believe. Take my word for it, it costs a hell of a lot. But then it's worth a lot. If morality weren't damned expensive it wouldn't have any value at all. Show me any mug who wants it for its own sake."

"You meet coincidence everywhere except in novels. Novelists are such conceited chaps, they won't be grateful for coincidence. Everything's got to fit together, with a meaning. There ain't much meaning in life, dear boy. That's what you can't get 'em to understand."

And here's something amusing. Arthur Crook quotes another lawyer:
"[A murderer's ] first job is usually his last, and even if he's successful it's as much luck as anything. And as Scott Egerton always said, the last trump always lies with fate and she bein' female, there's no telln' how she'll play it."
Scott Egerton is the first detective Malleson/Gilbert created but soon abandoned for the livelier, unscrupulous Arthur Crook.

THINGS I LEARNED: The phrase "Lombard Street to a china orange" popped up twice in the story. It's a very old British colloquialism meant to indicate the odds against something happening favorably. Lombard Street was the center of London's banking world since the 12th century according to Oxford Reference. As for the china orange part, they have this to impart to us: "The sweet orange (Citrus aurantium) was first sold in London in the mid-17C and by the 19C it was used figuratively to mean anything of minimal value." Oxford Reference also says that the phrase can be found as Lombard Street to a Brummagem sixpence, ...to an eggshell, ...to ninepence.

Arthur Crook says late in the book "You remember Balder" and then proceeds to quote a poem that starts "Better to live a slave, a captured man..." Balder rang no bells with me. Crook is alluding to the work of Victorian poet Matthew Arnold who wrote a poem called "Balder Dead". The full quote which I won't print here is reminiscent of Lucifer's sarcastic line "Better to reign in Hell than serve in Heaven." Actually, Gilbert misquotes the poem because the true first line is "Better to live a serf..."

EASY TO FIND? Here's one Christmas present that'll be hard to find for you or anyone else on your list. Took me several years to find an affordable copy. Even though it was published in both the US and the UK followed by a couple of paperback reprints it's a very scarce book. But if I were an enterprising reprint house I'd jump on this one as well as several other Anthony Gilbert books. So many of these are truly worthy of a new life for 21st century readers. Gilbert was more modern than most of her Golden Age contemporaries and The Clock in the Hatbox has a remarkable freshness to it that has not dated at all. This one has a lot to say about innocence, guilt, justice, and the legal system. Plus it's really one of the most innovative and gutsy detective novels in her large output, if not the entire genre.
Posted by J F Norris at 9:54 AM