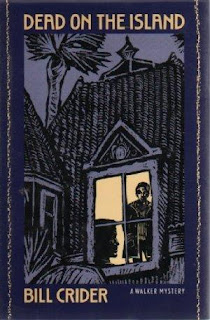 Truman Smith is not so successful private eye living in Texas. He spent a long time searching for his missing sister, never finding a trace of her, and his failure still haunts him. In his retirement he'd rather work his way through Faulkner's novels than devote any more time to tracking down missing people. Somehow he gets talked into accepting another job and he's off to locate Sharon Matthews, a teenage girl who disappeared. The search will take him to a sleazy heavy metal bar, encounters with crooked businessmen and a gang of thugs, one attractive shopkeeper, a kidnapping scheme, and a couple of dead bodies. What a way to re-enter the world of a Texas private detective.

Dead on the Island (1991) may have been published in the early 90s but it sure seems like it's stuck in the mid 80s. The book is dripping with popular culture references that reminded me of my college days of 1979-1983 and not my first years in Chicago. Talk of Luke and Laura on General Hospital, Miami Vice, MTV, Nike Air sneakers dominate the frequent pop culture chit chat that fills the pages of folksy dialogue.  I'm not a fan of topical references because they really date a book and in this case date it to the period the book was apparently written.  However, my own dislike for this kind of talk should not put you off from discovering what amounts to a truly different take on the private eye novel. As a mystery, the book is well plotted, cast with a nifty group of colorful characters who aren't too run-of-the-mill, and the setting of Galveston and its history make for an often engaging story.

Tru is regular guy, a little too down home for me. He's single and shares his record strewn home with a moody cat called Nameless ( a nod to Pronzini's series detective, maybe?).  We get to know he predilection for Big Red soda (locally made in Waco), his love of 50s and 60s obscure rock and pop music, and his ambitious project of reading all of the novel sof  William Faulkner.

This was Crider's first attempt at the private eye genre and it's sort of by the numbers for me.  I saw through all the plot mechanics, pegged the bad guy from almost his first appearance, and easily predicted the kidnapping element before it is officially announced in the first third of the story. however, as a private eye novel there is too little action for my tastes While there are the requisite violent murders and sadistic villains who pop up to dole out beatings to our dogged detective there are also lots of Q& A scenes that slow down the pace. It's all so laid back. Much time in the first half of the book is spent discussing daily routines, how Tru makes his sandwiches, when he goes to bed, what the cat is doing, where it's going... We learn that Dino, Tru's high school buddy who hires him to find the missing girl is a TV addict and obsessed with the soap opera General Hospital. One of the characters lives in a mansion, has several servants, gives the appearance of being a refined and polished lady but would rather drink Mogen David than imported expensive French wines.

I did enjoy learning about the history of Galveston, that it was once the focal point of the state, the richest, the biggest, the most populous city. Crider delves into the way Texans think, pointing out the short-sightedness of their not realizing that the oil boom would not last forever, that it wasn't a bottomless magic supply that would continue to allow so many Texans to live the high life. Galveston is now a shadow of its former glorious city. The contrast of past and present is striking, enlightening and not a little affecting. Those were the sections that kept me reading and wanting more. 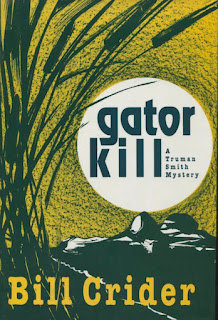 Tru Smith went on to appear in four more books.  I've not read any others and know nothing about how he may change over time.  Dead on the Island is a good first stab at a private eye character, the Galveston setting is authentic and rich with an engaging unusual history making for an enjoyable read. I'm just not sure I'm interested enough to get to know Tru better.