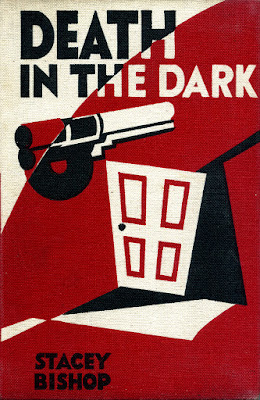 THE STORY: Three murders, all committed under seemingly impossible conditions, have decimated the Denny family in Death in the Dark (1930). A locked apartment building and a death by gunshot in a darkened bedroom, another death by gunshot done in full view of five witnesses, and a shooting in a jail cell with no one near the victim nor any gun in the cell. How has the murderer achieved these miracle crimes? Intellectual criminologist Stephan Bayard with the help of police Detective Jules and Bayard's close friend George Stacey Bishop manages to weed through the chaff and get to the heart of all the mysteries. Along the way the reader is treated to various lengthy and esoteric discussions of fine art, the state of modern music in 1930, and the criminality of thymocentric personalities. Once again, the influence of Dr. Louis Berman rears its ugly head in yet another early American detective story plagued with talk of eugenics and the bogus science of determining personality based on endocrinology.

THE CHARACTERS: Stephan Bayard is another of the many American detectives descended from C. Auguste Dupin and Philo Vance. He is as cold and rational as Dupin and enjoys his esoteric monologues like Vance. Within minutes of learning of the death of Dave Denny, a music concert promoter, Bayard is sure that the man has committed suicide. But a key left in a door when it should be hanging on a hook, one of Denny's diehard habits, will bother the criminologist until the final pages. Bayard much like Vance is also a cultural connoisseur and we get several didactic lectures on art, music, and literature with loads of name dropping of both familiar and obscure painters, sculptors, musicians and writers. Bishop is the S. S. Van Dine stand-in of the book and is both mythical author and narrator when in fact "Stacey Bishop" is the pseudonym of modern musician George Antheil.

Dr. Stein, a radical endocrinologist, is one of the many fictional doctors inspired by Louis Berman's work on controlling personality and behavior through use of hormones and surgery of the pituitary and thymus glands. Berman's radical theories and practices which flirt with controversial eugenics theory caught the imagination of many genre fiction writers at the time. Donald Clough Cameron's criminologist, Abelard Voss, for example is another fictional detective who likes to espouse Berman's theories. Antheil takes this specious science to the extremes making Stein something of a mad doctor tinkering with experiments more suited to a science fiction shocker. There is a scene where Bayard and Bishop visit Stein's lab and we see his experiments have led to the development of a bizarre machine that in its description sounds like something out of Fritz Lang's Metropolis. It seems to involve the extraction of personality via electricity and the wearing of a metal mask. I read these sections several times and still can't make sense of them. The finale of the novel is straight out of a shudder pulp magazine and is completely out of place for a story that was up till then purely cerebral and focussed on logic and ratiocination.


The suspects are mostly made up of stock characters with paper thin personas like Mrs Denny, a bed ridden wealthy matriarch; John and Frieda Alvinson, composer and his "boyishly handsome" wife who serves as the 1920s exotic female figure; a profligate brother in Aaron Denny who is financially irresponsible and hated by his stepmother; and a handful of servants who are nothing more than symbols. Bayard and Stein are the only characters in the book that approach anything remotely resembling human dimension, even if it is mostly intellectual. Even the murderer comes across as lacking in any real depth until the last couple of chapters when motivation is revealed and we get more nonsense about the thymocentric personality.

INNOVATION: Death in the Dark is overloaded with intriguing new ways to tell a detective novel. If they all tend to obfuscate the story that's no real failure. They often made me laugh in astonishment rather than in ridicule. Bayard draws up numerous fact sheets that serve as tabulation scenes highlighting the oddities that make each crime impossible. He also informs Bishop that Sir Richard Muir, the lawyer involved in the trial of Crippen, liked to compose "poems" during his case summations which he would read to the jury at the close of a trial. Bayard then composes his own series of blank verse tributes to each of the three impossible crimes pointing out each puzzling incident that is nagging his overstimulated brain. In effect we get two separate and protracted tabulation scenes: one in a bulleted list format, the other in a pseudo-poetic format.

Over the course of the book the impossibilities are each dealt with individually with each solution presented as it is discovered rather than revealed in the concluding chapter as with most detective novels. The problem of a key left in the locked door of the Denny apartment is oddly the one problem that is not explained until the novel's end. The jail cell murder -- the most ingenious of the three crimes -- is surprisingly solved almost immediately but having its roots in more pulp fiction gimmickry the bizarre method adds another incongruous element of the absurd to the overarching somber tone. 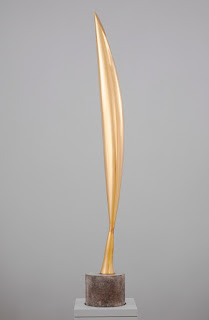 THINGS I LEARNED: I absorbed a lot about early American and European modern music and contemporary modern art of the late 1920s. Among the artists mentioned is sculptor Constantin Brancusi and his abstract series known as Bird in Flight. Bayard talks about this shape and the fascination with all things streamlined and draws analogies to the evolving trend of women's physiques becoming more boyish, less shapely. He compares the differences between curvaceous American Gertrude Denny and Russian emigre Frieda Alvinson repeatedly throughout the story. At one point Frieda is compared to a "transvestant" which Bishop points out is a type that is appearing with increasing frequency in New York. (In a brief note after Bishop's preface reprint publisher John Pugmire points out that Antheil's eccentric punctuation and spelling has been preserved so the reader may "experience the full flavor of the original." ) 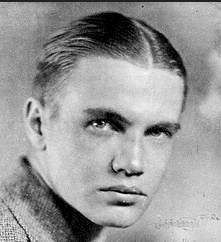 THE AUTHOR: George Antheil was an aspiring modern music composer during the 1920s who is now best remembered, not for his concert work, but for his music scores of movies like Repeat Performance, Knock on Any Door and House by the River. Death in the Dark is supposedly a cathartic revenge book which Antheil wrote in reaction to his disastrous Carnegie Hall debut in 1927 of Ballet Mécanique. Each of the victims in the murder mystery is a thinly disguised version of the people Antheil held responsible for his public humiliation. The story of the novel's creation, the concert and the people who served as the inspiration for the characters is told in an Afterword by Mauro Piccinini. In passing Piccinini also touches on Antheil's other claim to fame -- his physics work and the development of the "frequency hopping spread spectrum" invented in tandem with actress Hedy Lamarr.

EASY TO FIND? John Pugmire has reprinted this extremely rare detective novel as part of his Locked Room International imprint. It's available only as a paperback via amazon.com and nowhere else. LRI does not distribute to bookstores as it is a print-on-demand operation utilizing Amazon's CreateSpace self-publishing platform. Don't hold your breath trying to find an original 1930 edition published only in the UK by Faber and Faber in a very small print run. The only copy I've ever seen offered for sale was back in 2010 and was priced at $1500. Currently, the only copies are in a much more affordable $25 paperback edition just released a few weeks ago. Click here to go the book's sale page on amazon.
Posted by J F Norris at 7:30 AM