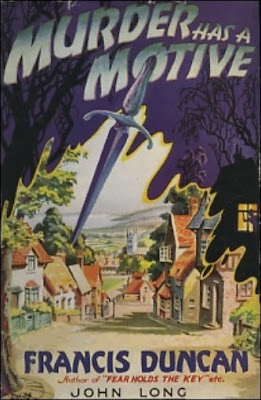 If you were to tell me that you just discovered a great new series of mystery novels in which a sixty-something retired tobacconist who liked to read romantic fiction magazines was the amateur sleuth I would probably turn and run the other way. Too twee for me. I had my fill of sentimental romantic subplots in the mystery novels of Herbert Adams. I’m certainly not going to read a detective novel in which the sleuth passes the time filling his head with fictional stories of true love and happily ever after lovers. Or so I thought. If I actually followed my preferences and avoided the Francis Duncan mysteries where this character solves baffling crimes then I would have missed out on some of the most mature and thoughtful detective novels of the mid twentieth century.

I didn’t know anything about Mordecai Tremaine when I bought three of the new reprints of Francis Duncan’s mystery novels and read them in quick succession. Yes, Tremaine is a retired gent who unabashedly likes to pass the time reading issues of Romantic Times. That aspect is not really pointed out in selling the books. It’s only incidental to the books (thankfully) but it appears in all three books I’ve read and in one case figures into the story. This unusual pastime also gives you some insight to the humanity of the man. Tremaine has another hobby. Not surprisingly it turns out to be criminology. Like all fictional amateur sleuths he has a close friendship with a police inspector and has a remarkable habit for stumbling across murder cases often while he’s on vacation. Mordecai is one of the better humanist detectives. Even more appealing is that Duncan's crime novels are grounded in a morality and sense of justice in direct contrast to the trend of post-WW 2 crime writers who were increasingly creating anti-heroes and exploring the effects of morbid psychology. In one of the truly rare instances of discovering a forgotten but exceptionally well done mystery series I read these three books in an order in which they got better and better ending with the best of the lot.

Murder Has a Motive (1947) involves an amateur theatrical troupe. It’s also something of a bibliomystery in that the script that’s being produced by the troupe (which shares the title of the novel) is being used as a guidebook of sorts by the murderer. There is also a subplot mystery as to the identity of the playwright. The plot is in effect coming to life in the village as it is being rehearsed on the stage. One by one cast members are being killed just as they occur in the play.

Lydia Dare, the stage manager, is the first victim. Prior to her death she had an abnormal fear that “something ugly, and horrible, and obscene” is infecting the town and its people. She talks of a “black power brooding over us all, just waiting for an opportunity to strike.” This theme of murder as an malevolent force pervades the novel. Murder in the village of Dalmering becomes a horror transforming the town as a disease affects the body. Tremaine fells a “monstrous villainy” everywhere he looks. “Always he could see ruin and destruction and human sorrow.” Even the shining sun becomes “indescribably evil” as Tremaine contemplates how Lydia’s death has deeply affected –more accurately as she herself said has infected everyone -- including himself. He succumbs to his sentimental side and obsesses about her wedding that will never be and watches helplessly as her fiancé Gerald Farrant descends into a morose depression. He needs to stamp out the evil and find the murderer.

Duncan’s book ought to feel heavy handed with all this talk of evil. Instead he hits just the right note of dread and fright. There is never anything remotely resembling complacence that sometimes enters village murder mysteries. Lightness and flippancy never enter the picture to offset the dire situation of a seemingly mad killer on the loose. The emphasis is always on how violence does indeed wreak havoc and affect everyone in Dalmering. Hate acts as an infectious disease. In his role as detective Mordecai Tremaine becomes both Nemesis and Dalmering’s spiritual healer. 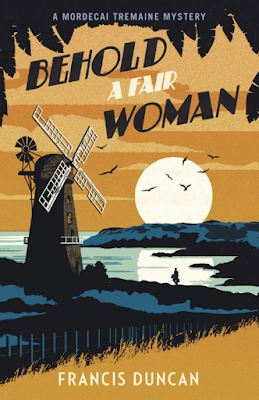 Criminal behavior is explored in another way in Behold a Fair Woman (1954) which deals more with the preservation of reputation. Murderous actions grow out of a desire to protect others at all costs. Duncan has not strayed too far from the amoral influence of the seven deadly sins, however. Whereas hate and wrath was the evil that infected Dalmering the sin that weighs heavily on the occupants of Moulin d’Or is avarice.

In Behold a Fair Woman the character relationships are deeper and richer. I began to see with this second book that Duncan was not only interested in the mystery plot but in writing a real novel that used crime to explore ideas not just to present a puzzle that will entertain. Most of the characters in Behold a Fair Woman have criminal pasts and are trying to escape that past and begin life anew. Resorting to crime in order to preserve their new lives has more credence than would melodramatic emotions and diabolical revenge acted out in frenzied hatred as in the theater milieu of Murder Has a Motive.

By the time I got to So Pretty a Problem (1950) I was convinced that Duncan was more of a novelist than a mystery writer. He was interested in character more than the puzzle and crime would grow out of the character's lives and situations rather than a plot existing as a framework for stock characters to enact. But I was genuinely surprised when the plot in So Pretty a Problem was almost a throwback to the Golden Age of Detection with allusions to famous works by G.K. Chesterton and an impossible crime problem. The characters are just as fully human as in the other books but this time the plot is so filled with truly baffling problems and there are multiple culprits of one sort or another that the book quickly became my favorite of the three. 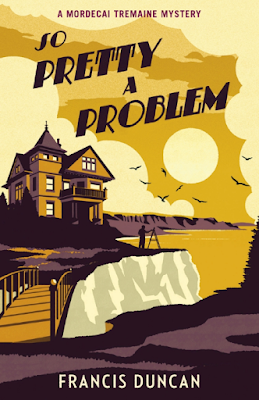 Adrian Carthallow, a temperamental painter, lives in an isolated house on an island accessible only by one bridge. The island’s cliffs are sheer, the shoreline dangerously rocky and high tides make the ocean front property too perilous to allow for a dock and access by boat. Tremaine is drowsily lounging on the beach when he is awakened by a gunshot. He runs up the path, crosses the bridge and runs into Helen Carthallow who confesses that she has just shot her husband. Tremaine is sure she is covering up for someone and does not rule out the possibility of suicide though when the police arrive evidence does seem to point to murder. But how can it be anyone else?  Only Helen's fingerprints are on the gun. No one was seen crossing the bridge. An invalid neighbor conveniently happens to be a habitual nosey Parker who spies on everyone visiting the artist's home and she is sure she saw no one other than the daily visit of the mailman. It looks like to be an impossible crime.

The story seems simple but Duncan manages to complicate the plot with his usual variety of colorful characters, a few odd sideline mysteries like who slashed the portrait of Helen in Adrian's studio and whether or not Adrian was involved in an art forgery scheme, plus a plethora of jealousies and secrets that provide multiple motives for Adrian's murder. He was not well liked, especially by his wife. Could she actually be guilty? There is one very well placed clue which I spotted but dismissed as a red herring when Tremaine rules out a certain activity. Of course I was fooled, and that one clue was something I ought not to have discarded as meaningless. For that bit of misdirection (probably the best he ever employed) Duncan gets major points and it makes the "impossibility" of how the murder was committed much more clever than I expected. So Pretty a Problem is entirely satisfying, engrossing, thought provoking and with more plausible twists than any of the other two books. I think it is his best novel and best plotted detective story.

Five of Francis Duncan's mystery novels featuring Mordecai Tremaine have been reprinted by Vintage Books in their Death's Head Moth imprint. The other two are In at the Red and Murder for Christmas. They all sport attractive retro style covers and are available in both paperback and digital editions, although the eBooks can only be purchased via the UK amazon site. I highly recommend that you read any of them with a slight nudge towards So Pretty a Problem as his most rewarding and entertaining fair play murder mystery, clearly a homage to the Golden Age. It would be a great service to devotees of traditional detective novels if the rest of Duncan's catalog were reissued. Cross your fingers for more!
Posted by J F Norris at 6:59 AM