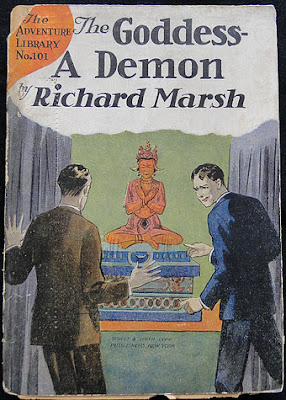 THE STORY: John Ferguson witnesses the gruesome murder of his neighbor and gambling rival at the hands of a knife wielding cloaked figure. Moments later a woman appears at his bedroom window. He lets her in and sees she is drenched in blood. She cannot remember her name, where she lives, how she came to be at his window or why she is wearing a blood-soaked cloak. In fact, she can recall nothing not even whether John is the name of a man or woman. Ferguson is bewitched by her beauty, vaguely recalls having seen her somewhere and is certain she has nothing to do with his neighbor's death despite her gruesome state of her clothing and the coincidence of her sudden appearance so shortly after the murder. He sets out to discover who she is, why she came to the building and who really killed Edwin Lawrence and why.

CHARACTERS: The Goddess: A Demon (1900) is narrated by John Ferguson, a typical sensation novel protagonist of the early 20th century. He's ridiculously wealthy but we have no idea what he does for living. Extremely tall, with an intimidatingly athletic build and a volatile temper Ferguson is very much like the numerous musclebound playboys who will turn up in American hero pulps and comic books fighting criminals as a lark. He has a self-deprecating wit often calling himself an idiot and stupid for not seeing things clearly and acting on impulse. But his talent for quick put downs and emasculating language calls to mind the smart aleck private eyes of the 1930s and 1940s. There are several times when others comment on Ferguson's "persuasive manner" -- a euphemistic and ironic way to call attention to his penchant for talking with his fists and roughhousing disagreeable men. There's a lot to like about Ferguson even if he has a tendency (as do many of Marsh's characters) to drone on in an artificial manner of speech, even for an Edwardian man: "Mr Morley, be at ease, fear nothing. You are the sole proprietor of your own tongue, use it to preserve silence..." A gentlemanly, yet snide way to tell someone to shut up.

The woman is soon identified as a notable actress through some rudimentary detective work occasioned by formulaic clues: a letter signed B, a handkerchief with the initials E.M., and -- most convenient of all -- a photograph stamped on the reverse with the name of a well known professional studio. This last allows Ferguson not only to confirm the woman's identity but find out her home address. That's the extent of the detective work. There are a handful of police characters led by a generic inspector, but the investigation of the murder takes a backseat to the uncovering of the woman's identity and Ferguson's determination to clear her name. He goes to great lengths to protect even to manufacturing a patently false case for himself as the killer. Inspector Symonds sees through it almost immediately. 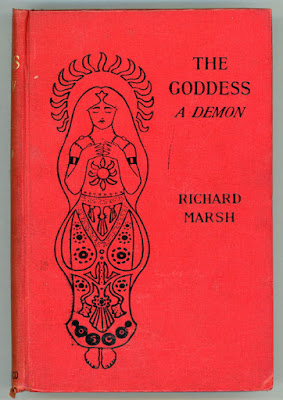 Supporting characters include a series of servants, various ruffians, and notably the unctuous Dr. Hume, a "mental pathologist" who serves as Ferguson's foil.  Hume is a quasi-villain just as determined to prove that Ferguson is not only obstructing justice but that he is most likely insane. He plays detective by breaking into Ferguson's room and finding the incriminating bloodstained cloak that Ferguson foolishly wadded up and shoved in the back of his wardrobe rather than destroying it. Dr. Hume actually believes nearly everyone he encounters is mad in one way or another. We get to listen to his theories about all sorts of mental illnesses from outright insanity to "brain fever."  He's an insufferable ass when he's interacting with Ferguson and Marsh clearly has some less than favorable ideas about the arrogance and overwrought egos of men of science.

Another foil to Ferguson is Miss Adair, actress and roommate to the amnesiac woman known as Bessie. The scenes between these two offer Marsh more opportunities to revel in his sarcastic sense of humor which enlivens a story that has a tendency to spill over into indulgently lurid melodrama. Miss Adair is amused by Ferguson's head over heels infatuation with her roommate and can't help but ridicule his beauty worship.

The criminal activity is not just confined to savage murder. A stereotyped Jewish moneylender named Isaac Bernstein plays an important part in the story. Money, debts, forgery and financial chicanery all rear their ugly heads by the midpoint. At the start Ferguson was seen gambling at cards with Lawrence who the reader knows has cheated him. Lawrence has a habit of keeping a "debt diary" which describes how Ferguson owes him a total £1880. No better motive could have been handed to the police. Couple this with Dr. Hume's discovery of the bloody cloak and things do not look good at all for our temperamental hero.

QUOTES:  "It is possible for persons of even ripened years to feel surprised, as you will discover when you yourself attain to years of discretion."

With scant ceremony he endeavored, without a word of explanation, to force his way into the house. I am not a man with whom every one finds it easy to play that kind of game. When I am pushed, I push. Placing my hand against his chest, he went backwards across the pavement at a run.

"I don't fancy, Mr. Ferguson, that all women are built exactly on Bessie's lines."
"Would that they were. Miss Moore is the stuff of which our mothers should be made."
She looked at me a little sideways; I was conscious of it, though I myself looked straight ahead.
"Are you married, Mr. Ferguson?"
"No, I am not so fortunate."
"Ah! I shouldn't be surprised if you were so fortunate a little later on."

He was an out-size in policemen; all of five foot ten, well set up, with a carriage which denoted muscle. Fortunately for my purpose, his face did not point to a surplus of brains; he struck me as being stupid as I was.

Coroner at the inquest: "Witness, look at me."
Ferguson, who has previously been evading his questions with banter:  "If you desire it, with the greatest pleasure. Though there doesn't seem to be much to look at." 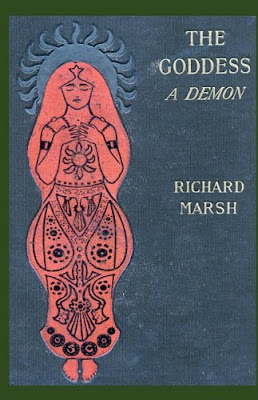 THINGS I LEARNED: The edition I read is a modern reprint and heavily annotated by Richard Marsh expert Minna Vuohelainen. There are over 100 footnotes on period vocabulary, literary allusions and London geography. Some of it interesting, but much of it unnecessary. Does a literary scholar really need to footnote well known literary figures like Hercules, Samson, Echo; basic Latin like non compos mentis, ipso facto, ergo; as well as defining words and terms like lasso, promissory note, and letting us know that "all the kings horses and all the king's men" refers to Humpty Dumpty?  This is patronizing scholarship at its most annoying. I kept flipping back to read all of the notes with increasing astonishment.  I did think the London geographical notes were vital and useful. But so many of the endnotes were insulting in their pedantry.

But there were also blatant oversights in these endnotes. Like the paragraph in which we learn that Miss Adair and Ferguson are seated while traveling up to the seventh floor in an electric lift. I had no idea early elevators in England were equipped with seats for the passengers. Vuohelainen makes sure to give us the dates of the invention of electricity, the phonograph, the typewriter, and the elevator each time they are mentioned but neglects to point out the fascinating detail of seats in the lift when mentioned. Twice in a single paragraph, no less.

Ferguson lives in what must have been the 1900 version of a state-of-the-art luxury apartment building. It is seven stories tall, has electric lights not gas, two electrically powered elevators (one for servants, another for residents), a full staff of valets and maids for each floor plus a housekeeper and cook who provided breakfast for residents. He mentions at one point in the book that he carries more money on him than most people: £100 in notes and £20 in sovereigns. This is the equivalent of £14,000 (US$11,471) in 2016 currency! At no point on the book do we ever learn what he does for a living, but it's obvious he's wealthy whatever his profession. His cavalier attitude and quick temper might have a lot to do with the entitlement of the rich.

Interestingly, though the book is very much about gambling, spendthrift lifestyle, usury and financial irresponsibility Vuohelainen does not discuss money, finance or wealth at all in her lengthy introduction. Rather she devotes much of her lecturing on a section entitled "Modernity and mental health" going so far as to cite specific usage of words like idiot, lunatic, maniac and all references to madness to drive home her point. But to my mind the use of the word idiot, almost always spoken by Ferguson about himself, as well as all the other synonyms are all used quite obviously in the vernacular.  Only when Dr. Hume is talking about madness are any of these terms directly related to mental health or lack of it. Throughout the novel it is Hume alone who is obsessed with mental illness and madness.

EASY TO FIND?  Thanks to Valancourt Books The Goddess: A Demon is available in their usual handsomely designed paperback books as well as a digital version. There are other POD reprints of many of Richard Marsh's books since they've all lapsed the copyright laws but I'd recommend any of the Valancourt editions. The biographical information in Vuohelainen's introduction I found to be the most interesting. The "literary analysis" I thought to be mostly misguided and spurious and ended up skipping over almost all of it.  There are also seven appendices on topics incidentally raised in the novel such as "Alcohol and personality" and "Women, nerves and sexuality".  Of these appendices the most compelling is the collection of contemporary newspaper reviews of Marsh's novel. It's always interesting to read what people of the time thought of what amounts to the precursor of pulp fiction.
Posted by J F Norris at 1:57 AM