Henry Reed had pitted his strength against the Strath and the influence of the house had triumphed. 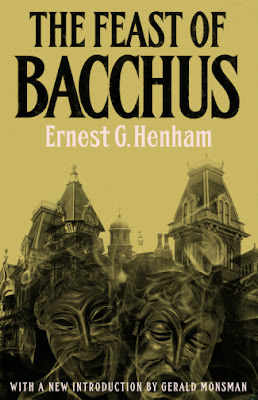 THE STORY: Henry Reed inherits the Strath, a dilapidated mansion in the rural hamlet of Thorlund, and plans on a thorough renovation. Included in his rehab plans is a clean-up of the untended garden beloved for its wild beauty by Dr. Berry, the local reverend who was allowed private access to the garden for decades. Dr. Berry tries to dissuade Reed from changing anything about the house or its gardens. The American disregards the reverend scoffing at his implied dire warning. Within a few days the sinister influence of the house that locals have gossiped about for years manifest itself when Reed is found strangled on the threshold of the Strath (providing us with a minor murder mystery element) ushering in a cycle of bizarre events, personality transformations and explosions of violence.

THE CHARACTERS: The Feast of Bacchus (1907) is a remarkable work of fiction not only for its lush writing and unusual plot, but for the meticulously detailed characters, some of whom act as archetypes. Dr. Berry is the antiquarian of the novel obsessed with the past, especially ancient Greek history and culture, and is the voice that reminds everyone of the inescapable past. Maude Juxon represents the quickly fading conventions of the superficial woman who marries for money and regards rearing children as a tedious task better suited for nannies than real mothers. Flora Neill is the embodiment of "the New Woman" who dares to flout traditional views like marriage being the only recourse for women's happiness. Mr. Price serves as the voice of all who fear the advances of technology, machinery and science that seem to be contributing to the break down of modern civilization and all they hold dear. Take all of these people and add in the Gothic notion of the house as living entity with a sinister influence (a word repeatedly used throughout the text) and you have the makings for an unusual haunted house story that melds metaphysics with philosophy and satirical commentary on the March of Progress. Everyone who enters the Strath succumbs to one of two moods symbolized by the evil masks of Tragedy and Comedy which hang in the hallway of the house.

ATMOSPHERE: This is perhaps one of the richest novels I've read this year. The story is not only dense with incident and meaning, the writing is arresting in its expression and intent. While the characters tend towards intellectuals and quasi-aristocrats speaking in an arch wit reminiscent of a Restoration comedy there are just as many common folk who reflect a wisdom often more profound. A passage featuring a farmer who speaks in a cleverly rendered dialect is full of portent and foreshadowing of dire events to come as well as well done sequences with anecdotes of the past that read like miniature short stories. The dialogue has a tendency to be didactic but never once does the reader get the feeling that he is being lectured by an erudite professor. The supernatural incidents are few but so polished and uniquely rendered that Henham transcends all motifs and formula of the old-fashioned haunted house story. He may have even invented scenes that have since become familiar tropes of the subgenre.

The mythology and culture of Ancient Greece play a heavy part in the novel as is suggested by the title. One of the most fascinating chapters ("Act III, Scene IV. Sentimental Comedy") is Dr. Berry's sermon delivered as a disguised method of wooing Maude Juxon in which he talks of how all Western art -- literature, poetry, music, singing, and theater -- have their origins in "the worship of false gods." After reading his insightful observations it will be difficult for anyone not to see the similarities between a church of any type, the services and rituals performed there, and a theater and all of its styles of performance and stage techniques. His lecture is not fiction either. All Dr. Berry's points are derived from the works of 19th century antiquarians and Greek scholars who first compared Greek religious rites and modern theater. This dependence on theatrical conventions is so prevalent that Henham cannot resist ending his novel with a masked ball in which the forces of good and evil are personified by two figures masked as Tragedy and Comedy. The partygoers are in for more than mere dancing and merriment when knives and swords are brandished to the accompaniment of jingling bells, mad laughter and a roaring fire. 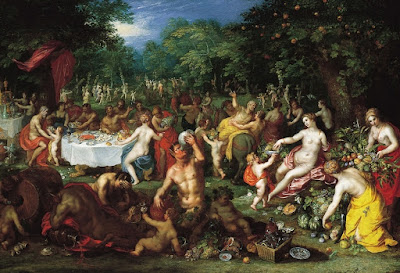 INNOVATIONS: There is a scene in which Dr. Berry receives messages from the ancient spirits that inhabit the Strath via automatic writing. He transcribes these messages in ancient Greek. When he comes out of his surreal trance and reads the pages he wrote unknowingly, he is astonished that the grammar and vocabulary is that of Attic Greek, an ancient language rarely encountered in the texts he is working on. He happens to be translating Greek poetry by Sappho at the start of the novel and those texts have been altered slightly to reflect modern Greek language. Dr. Berry is convinced that he has been used a conduit for the long dead spirits of his much respected heroes and heroines of antiquity. But to his horror the manuscript ends with a single phrase in English: "Damn you, Professor. You were right." He knows this admission can only have come from the spirit of Henry Reed.

As the story progresses each character transforms and they become inhabited by the forces of Tragedy or Comedy according to their own closely held secrets. Flora is driven to attempt murder out of jealousy, Maude faints when she sees visions of her own murderous thoughts. Conversely, Dr. Berry gives in to his latent sensuality and falls in love with Maude. The house exerts its influence not only on living beings but inanimate objects including the two Greek masks with a truly horrible secret about how they were created and the diary of Winnifred Hooper, a long dead former occupant of the Strath. Just listening to the diary be read aloud, for example, allows a personality transformation to take place.

The entire structure of the novel, subtitled "A Study in Dramatic Atmosphere", is modeled after a work of drama. The sections of the novel become acts of a play, the chapters are scenes labeled after various classical types of poetry and styles of playwriting like melodrama, musical comedy, and even Puppenspiele (German for puppet show). Enhancing the overall feel of a visit to a theatrical production Henham also includes an Overture, Entr'acte, Interlude and a chapter titled "Scene Shifting" (a phrase stagehands are well familiar with) in which we learn the terrible origins of the two masks carved and decorated by a corrupt and immoral German toymaker named Joseph Falk.

QUOTES: "They that be broke be took, sir. When I be broke I'll be took, and my son will say, 'Good-bye, father' and wait for 'is turn."

"Like us the Strath has its moods. Sometimes it is happy, and often it is sorrowful. It must either laugh or groan. And now you will change it all. You will restore the house, dig up the garden...and lay the Strath out like a dead body."

"The garden is your inheritance. That is the soul of the Strath. This is the dry body."

"You can't strike a bargain with unrepentant souls. You must employ drastic measures, and the only ways of getting rid of a spiritual nuisance is by using fresh bricks and mortar."

They who behold a tragedy see only the outward passions of the actors; of the influence which is behind they can see nothing. So one may see the tree tormented by the wind, but not see the wind.

"The idea of calling me wicked!" exclaimed Mrs. Juxon indignantly. "A married woman has certain flirting privileges, but an unmarried girl has none."

"It is because the house has a soul," went on Conway, as though she had not answered. "Because it lives and breathes, and has moods like us. [...] The Strath resembles you and me, in that it contains spirit, which, while it remains, preserves the fabric from corruption."

THINGS I LEARNED:
Squarson - a squire who is also a rector. A neologism made from combining the words "squire" and "parson".

Thymele is one of the many Greek theatrical terms I rediscovered. I'm sure I must've been first introduced to the concept of the church and the theater being related in "Intro to Theater History" back in my undergrad days but I've long forgotten all the terminology. The thymele is the name given to the ancient altar positioned in front of the orchestra in the first Greek theaters. All the plays were offered as performances and worship to specific gods and the altar was where sacrifices were placed.

When Conway asks how far reaching are the legends of the ghosts in the Strath Mr. Price remarks, offhandedly, "About the time Wolfe was chasing Montcalm out of Quebec." as if everyone is equipped with a memory of such arcane history. I hadn't a clue what that meant. Price is referring to James Wolfe, Louis Montcalm and the capture of Quebec City in 1759. Apparently Wolfe was a well regarded British general who made his name in that battle. Lost to history and me, I'm sad to report. Maybe Canadians would know the two men better. Henham, after all, lived there for a while and was fascinated especially with the history of Quebec having written The Plowshare and the Sword: A Tale of Old Quebec (1903).

THE AUTHOR: Ernest Henham was born in London, lived in Canada for a while where he worked for the Hudson Bay Company. Under his own name he wrote the Gothic horror novel Tenebrae (1898) among numerous other novels of all genres well regarded by his contemporaries. Around 1908 he turned to writing novels about Dartmoor where he had retired to recuperate from ill health. These books were published under the pseudonym "John Trevena".

EASY TO FIND? Several of Henham's books including The Feast of Bacchus as well as a few under his John Trevena pen name have been reprinted by Valancourt Books. This is the edition I own and I'd say the only one worth having for its usual handsome design, easy readability and, more importantly, for Gerald Monsman's introductory literary essay on the novel and Henham's life. Valancourt offers all their books in print, digital and now audio book editions. There is no audio version of The Feast of Bacchus, but there ought to be. I cannot imagine a better candidate for that radio drama style of reading a book than this chilling tale of ghosts, possession, obsession and madness.
Posted by J F Norris at 12:01 PM