Time for my annual suggestions for this year's Halloween mini-movie fest, one you can have in the privacy of your own home. As always I tend to choose the lesser known, the dismissed, and the forgotten movies that will be good for a thrill or two this time of the year when everyone (well, almost everyone) is looking to be scared. Once again, the list is in reverse chronological order. All the movies are available in some DVD version or via an online streaming movie website.

Wake Wood (2011) One of the most original and truly terrifying films I've seen in a long time. Takes the basic idea in that old ghost story chestnut "The Monkey's Paw" to delirious levels. A young couple's first child dies and they enlist the aid of a local spellcaster with the power to bring her back to life for three days. The ritual sequences are some of the most cringe inducing and nightmarish of any recent film. The overall feel of the movie is one of impending doom and non-stop dread. You just know things are going to keep getting worse for this couple who wished for way too much and don't want their daughter to leave them. It combines the rural pagan rites seen in movies like The Wicker Man and Harvest Home with contemporary spins on witchcraft and ghost movies of the past. A real modern classic. With Aidan Gillen, recently a nasty Machiavellian courtier in Game of Thrones, as the Dad; Eve Birthistle as Mom; Timothy Spall as the man with the power; and Ella Connolly as one creepy little girl. 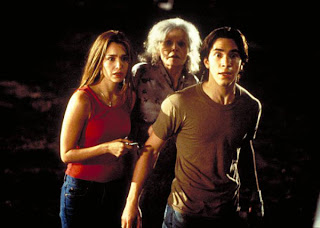 Jeepers Creepers (2001) You'll never think of that big band tune the same way again once you see this gruesome shocker. Admittedly a mixed bag it's still deserving of a look despite its reputation for being a bad film. The good far outweighs the bad here. A brother and sister have a near deadly encounter with a madman truck driver. Later they do their Scooby Doo act and investigate some nocturnal doings that reveal the driver to be a monstrous killer. And when he spots them spying on him they become his next target. Jeeper Creepers is interesting to me because it dares to take a young man and treat him the way most modern horror movies treat young women - as a sexualized victim. I also get a strong vibe of this film being an allegory for the horror of sexual predators. Justin Long is the hapless hero doing what a heroine normally does in horror movies of this type. Also on hand is Eileen Brennan in another trademark oddball role (the Cat Lady) that is an enjoyable bonus. Victor Salva directed (a man with a few skeletons in his closet) and also did a sequel which I have not yet seen.

The Grapes of Death (1978) Bizarre take on the idea of the walking dead. A fungus blight affecting the grape crop of a French vineyard has gruesome results on the wine lovers of the nearby towns. Kind of a Eurotrashy grindhouse horror movie with cheap special effects, blood that looks like house paint, and lots of opportunity for gratuitous female nudity. But for an odd take on zombies it's definitely original and has some genuinely frightening scenes. And some very disgusting ones, too. Gore-aphobics should avoid this one. Directed by Jean Rollin who also made --

The Iron Rose (1973) Rollin's best and artiest horror film made before he became obsessed with lesbian vampires. A young man and woman visit an ancient cemetery and become lost in its labyrinthine, weed infested grounds. Their desperate attempts to find a way out lead them to secret crypts, hidden desires and eventually madness. There is no real plot, but it's beautiful and mysterious and an often baffling film to watch. Above all, it's imbued with an unparalleled eerieness. How many films include a lovemaking scene in a bone filled pit?

Seven Deaths in the Cat's Eye (1972) The giallo category in crime/horror movies has quality that runs from arty decadence to campy to just plain dreadful. There is the arty gore of Dario Argento, the cinematic mastery of Mario Bava, the cruel and sadistic work of Lucio Fulci, and the trashy breast baring sexploitation films of Amando de Ossorio. I've seen at least one example of each and although I prefer my thrillers to be coherent and moderately entertaining I am willing to indulge in the guilty pleasures found in the work of those filmmakers mentioned above for the sake of the loopy stories, the eye-popping use of color, and the often terrible line delivery of the voice actors chosen to dub the primarily non-English speaking Spanish or Italian casts. On occasion I stumble across an example of this strange movie genre that is one I would recommend. If you've never seen a giallo and you want a good example -- one that isn't too laughably bad and includes crime, detection and elements of the supernatural you would do well to start with this one written and directed by Anthony Margheriti who often resorted to the English pseudonym Anthony M Dawson.


Corringa (played by Jane Birkin) has been expelled from her convent school and returns to Castle MacGrieff in Scotland where her mother and her aunt are bickering over selling the castle. We learn during a dinner scene that there is a family curse -- that if any MacGrieff kills another in the MacGrieff bloodline the victim will become a vampire. And soon members of the family are being attacked right and left. 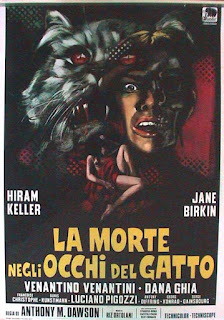 The dialog in these movies is something to marvel at. You can count on someone saying something ridiculous about every five minutes or so. In this script we have such prizewinners as these:

Corringa: Too many books never did a woman any good. (as she tosses the Holy Bible and some other books into the blazing fireplace!)

Suzanne: Why all these scruples all of a sudden? When you found me, you knew I was a slut.

Dr. Franz: You are absolutely on fire tonight, darling! Are you excited by all the blood that has been flowing around here?


The Reptile (1966) Although the poor choice of the title already gets the viewer thinking of things that would have been better left a surprise this is still one of the better non-vampire Hammer horror films. Overall, I liked it and managed to forgive some of the creaky cliches and weak story telling. The plot is very reminiscent of the weird menace stories you'd find in pulp magazines of the 30s and 40s. If the film had been told from the point of view of the doctor's daughter I think it would've been more effective. As written we have the new neighbors trying to understand the sudden death of the husband's brother, a mysterious doctor, his daughter in peril and an equally sinister Malaysian servant whose role is never fully explained even in the doctor's final monologue which is supposed to explain everything that passed in the first two thirds of the movie. Some effective moments, good creepy acting from Noel Willman and Marne Maitland as the sinister doctor and Malay. Someone somewhere mentioned this movie has some parallels to Hawthorne's brilliant supernatural story "Rappaccini's Daughter" True but the movie's pulpiness doesn't merit such a lofty analogy. 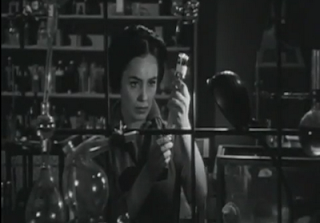 The Wasp Woman (1959) If you want another female monster movie look no further than Roger Corman's subtle satire on cosmetics and obsession with artificial beauty. Sort of a female version of The Fly and not so much scary as it is just plain strange. Susan Cabot pays the price for vanity when she decides to be the human guinea pig for a rejuvenation product derived from wasp enzymes. The title says it all. It was remade into a more campy version in 1995. Another film, Evil Spawn (1987), also uses the same premise about a youth serum that turns an aging actress into a monstrous insect thing. Recycling and rehash is part and parcel of the horror movie making world.
Posted by J F Norris at 2:29 PM