﻿Agatha Christie shows a completely different side of her writing talents in a little discussed collection of short stories called The Hound of Death (1933). Perhaps the reason The Hound of Death is so little known and never saw multiple reprints was due to the simple fact that it is not a collection of crime stories, but mostly tales of supernatural and fantasy. Can Agatha chill the bone as well as she does with bamboozling the mind in her well known whodunits? I think she does very well in some instances.

The book had an unusual publishing history in that it was originally offered with a handful of other books (including The Venner Crime by John Rhode) by independent publisher Odhams Press as part of a subscription series. The books were available only by purchase using coupons (plus seven shillings) that were collected from their magazine The Passing Show as a promotion for the revival of that journal. The book was later reissued by Collins Crime Club in 1936. The stories from The Hound of Death appear in three separate collections in the US. The bulk of them are split between The Witness for the Prosecution and Other Stories and The Golden Ball and Other Stories. One single story, "The Last Séance", appears in Double Sin and Other Stories. All three story collections are currently in print -- as are all of Christie's books -- in trade paperback and eBook editions from William Morrow in the US.

My intuition told me that many of the stories in The Hound of Death were written in her very early career. Further research proved my assumptions to be correct. Though the book was published in 1933 all of the stories were written much earlier with about half of them having first appeared in magazines throughout the 1920s. The earliest (and, in my opinion, one of the most effective) is "The Call of Wings." Written prior to World War I it shows a novice writer's love of symbolism, allegory and ironic endings. It's her most original story of a supernatural type in the entire book, perhaps her entire career.

Silas Hamer is typical of Christie's protagonists in these supernatural shorts.  He proclaims, "I don't believe in anything I can't see, hear and touch."  This is usually a sign that the character will encounter some life altering event that will challenge his rigid world view. And no sooner has Silas uttered those words then he meets up with a mysterious legless cripple playing enchanting music on  "a strange instrument whose notes were much higher and clearer than those of a flute."  The music is bewitching, transcendent and literally uplifting.  Silas finds himself floating and hovering above the ground.  It terrifies him and he finds himself clutching at a stone buttress in a nearby wall to keep himself from flying away. Later he attempts to explain what happens to him each time he hears the haunting melody:

"--the music carries me there--not direct, but a succession of waves, each reaching higher than the last, until the highest point where one can go no further. I stay there until I'm dragged back. It isn't a place, it's more a state. [...] [T]here were sensations of light..then of sound...then of colour...All very vague and unformulated. It was more the knowledge of things than seeing or hearing them." 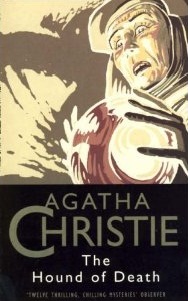 "The Call of Wings" reminded me of a weird short story by Lovecraft -- "The Music of Erich Zann." Like Lovecraft and Manly Wade Wellman Christie's supernatural tales find her characters drawn to mysterious forces in the past, ancient unknown powers that somehow find their way into the hands of men and women of the 1920s.  In "The Gipsy" we find Mrs. Haworth who has a gift of psychic powers and the ability to recognize those powers in others.  Sister Marie Angelique, the nun thought to be mad in "The Hound of Death," somehow manages to harness an ancient power and summon a spectral being of horrible force to help defeat an attack on her convent by German soldiers. Even the sinister "half English/half Oriental" Lady Carmichael consults an old book among the dusty tomes in her husband's library to bring about the wicked transformation of her stepson. Occasionally, subtle allusions are made that intimate ancient creatures are present. It is hinted that the legless cripple in "The Call of Wings" is an incarnation of Pan who, tired of his goat legs, amputated them himself.

I found several influences and signs that Christie perhaps was familiar with the work of Algernon Blackwood, William Hope Hodgson and perhaps even Margery Lawrence. She follows a formula for many of these stories that those three writers all share in their treatment of the occult detective tale. A narrator listens to a story of an other worldly encounter from a friend. The narrator then does some investigative work to learn the truth behind the seemingly implausible or impossible events his friend related. In many instances during the course of that investigation the narrator also experiences some sort of supernatural event that explains the mysterious events. This is the formula used in nearly all of the stories. In one story –"The Strange Case of Sir Arthur Carmichael" – the model of a John Silence or Dr. Miles Pennoyer tale is imitated in full. Dr. Carstairs, a psychiatrist who could easily have become a series character, travels to Arthur Carmichael's estate in the hopes of treating the man's mental disturbance but instead winds up investigating a haunting and encounters genuine supernatural events that are at the root of Carmichael's personality transformation.

Psychic ability and mediums, however, are Christie's favorite other-worldly topic to explore. We find them in one form or another in "The Red Signal", "S.O.S", and "The Gipsy." Ghosts and haunted houses are the runner-up and occur in "The Lamp", "Wireless" (retitled "Where There's A Will" in the US editions), and "The Mystery of the Blue Jar."  Oddly enough I found her ghost stories to be the weakest of the lot, especially "The Lamp" a slight and simple tale of a lonely child ghost with the most predictable outcome of the lot. She works best when she is writing a crime tale that adds a tinge of the supernatural as in "Accident" or "The Red Signal," a nicely done story that shows a talent for the type of misdirection she will come to master in her later novels. 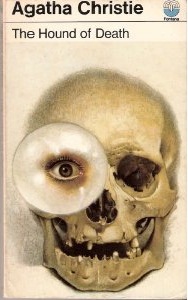 The Hound of Death and Other Stories
"The Hound of Death"
"The Red Signal"
"The Fourth Man"
"The Gypsy"
"The Lamp"
"Wireless"
"The Witness for the Prosecution"
"The Mystery of the Blue Jar"
"The Strange Case of Sir Arthur Carmichael"
"The Call of Wings"
"The Last Seance"
"S.O.S."
Posted by J F Norris at 6:33 AM