﻿
﻿The Secret of Sarek (US edition 1920) is one of LeBlanc’s strangest books in the Arsene Lupin series. Essentially, the complex plot revolves around Veronique, a young woman who travels to an isolated island off the coast of Brittany in search of her kidnapped son. She soon discovers that a terrible prophecy involving herself is about to come true. The island’s inhabitants believe that when the so called "Thirty Coffins" (some stones that line the island) have claimed their thirty victims and four women have been crucified from some oak trees then the God’s Stone will be revealed – a stone which gives life and death.

In an abandoned shack Veronique finds a dead man with his hand chopped off and a bizarre drawing of four women crucified – one of the women bearing her own face. She begins to think that some supernatural force is at work. Plenty of adventure and some legitimate thrills keep the pace moving until the woman’s former husband thought to be dead turns up alive. The villain then discovers an old Druid man who claims to be guardian of the God’s Stone. It is, in fact, Lupin in one of his many disguises. From here on the book takes on a strange mocking tone and the whole thing dissolves into what is obviously LeBlanc’s derision for Rohmeresque style thrillers. 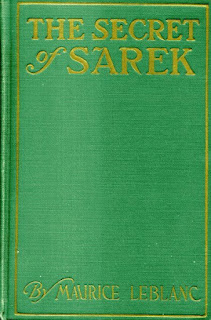 Critics have often commented that LeBlanc’s Lupin books border on the burlesque. In the case of this book that assessment is more than apt.

The Secret of Sarek was originally published under the French title L'île aux trente cercueils (The Island of Thirty Coffins). For a long time it was one of the most difficult LeBlanc titles to find in the used book trade as there were only hardcovers of the Macaulay first edition, scattered reprints from A.L. Burt, and no paperback copies. Additionally, those hardcovers were all priced relatively high. But now there are umpteen editions offered from POD "publishers" thanks to the expiration of its American copyright making the book an easy target for biblio-pirates looking to make a quick buck off a dead writer's work. The book may also be available free online or in some eBook format but I never bother checking for those.
Posted by J F Norris at 10:01 AM