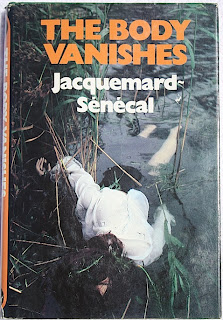 While the first book the French writing team calling themselves Jacquemard-Sénécal wrote was in fact the second book they had published (Le onzième petit nègre, 1977), their first published book was apparently considered to be more conventional by the publisher though no less ingenious. It won for them the coveted Prix du Quai des Orfevres, the French mystery writer's prize, in 1977. While The Eleventh Little Indian (as it was published in the US) was considered "too daring" I think Le Crime de la Maison Grün or, as the English publishers redubbed the book, The Body Vanishes (1976) is far more daring. The trickery employed in this debut (yet really their second book) and the gasp inducing solution surpass what the two men did in their Agatha Christie tribute.

A drowned woman's body disappears from a river bank. It reappears in the locked and burglarized workshop of Wotan Grün, an antiquarian bookseller. The only thing noted to be missing is a rare 15th century incunabulum, the envy of several collectors and the bookseller's competitors. The woman is soon identified as the lover of Wotan's son Denis, the morose and cynical black sheep of the Grün household. As the intriguing investigation proceeds the entire household is enveloped in a world of treachery and thievery, murder attempts and suicide, and -- believe it or not -- the search for an alchemy formula for turning lead into gold. 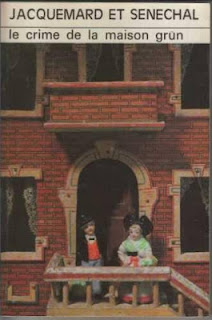 The book introduces their series character Lancelot Dullac (cute name, huh?), a police detective who works alongside another policeman named Holz. The detection in this book is mostly of the Q&A type, though there are several instances of Golden Age type originality and cleverness in the few scenes that involve physical evidence. Most notable among those portions is a second impossible murder disguised as a suicide that involves some rigged machinery that John Dickson Carr might have dreamed up.

Once again on display a plethora of plot devices and motifs found in the work of their idol Agatha Christie. There are allusions to Evil Under the Sun, Peril at End House, Murder at the Vicarage and the many stage related mysteries she wrote. The two writers come from a theater background and once again dig into their trunk of stage tricks and illusions to bamboozle the reader with dazzling misdirection. There is even some dizzying business with rifles and bullets that reminded me of Erle Stanley Gardner's gun crazy plots. All in all plenty of wizardry and plot machinations to appeal to any fan of the puzzle driven detective novel.

UPDATE:  I have eliminated a sentence above that is untrue. There is no "rigged machinery that John Dickson Carr might have dreamed up" in this book.  I confused this with another book that had a similar death, misinterpreted a sentence including the phrase "machinery the murderer had constructed" to be taken literally, and completely misremembered the final death in the book. Utterly embarrassed by this blatant example of my often addled memory.
Posted by J F Norris at 10:29 AM