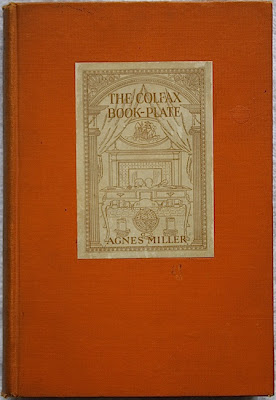 First, a little serendipitous trivia. This article -- my 300th post! -- is a review of not only a little known detective novel by an obscure author, but a bibliomystery. Apparently it is the only bibliomystery in the entire genre to deal with bookplates. As you may know from reading my frequent posts as part of the monthly "Left Inside" feature bookplates are something of a fascination with me. To have come across a book this unique that encompasses everything that this blog was meant to be about when I first created it (book collecting, detective fiction, obscure and forgotten books) and to have it serve as a milestone post makes me near ecstatic. And this wasn't even orchestrated by me. It was sheer chance.

Constance Fuller is the narrator and remarkably outspoken protagonist of The Colfax Book-plate (1926), the sole adult mystery novel by Agnes Miller who previously was known for a brief series of unusually literate juvenile mysteries called The Linger-Nots featuring a group of girls from a Dramatics Society who stumble upon puzzling adventures all having to do with historical eras. The third book in that series, The Linger-Nots and Their Golden Quest (1923), interestingly shares a key plot point with The Colfax Book-plate. 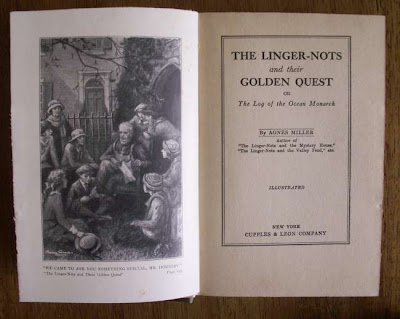 Constance has worked her way out of the confines of the stenographers' pool at the busy downtown Manhattan book shop Darrow's to a place that better suits her intelligence and sophistication. She works in the rare book room - specifically a section devoted to prints and engravings. Bookplates make up a sizable portion of this collection. As the story opens Constance is in charge of cataloging a large group of books recently purchased from a judge who lived in Richmond, Virginia. Among those books is a limited edition printing of a book entitled Notes on Medical Statutes in the Virgina Code by W. Clarihew. This particular copy, number 239 of 300, has an unusual pictorial bookplate thought to be the work of Hugh Colfax, a Revolutionary War era engraver whose work primarily has only been seen in England. If the bookplate should prove to be genuine and for it to appear on a copy of an American published book would cause a sensation in the bookplate collecting world and probably the world of bibliophilia at large. The US 1st (and only) edition, by the way, sports a replica of the bookplate exactly as described in the story as a paste-down on the front board.

Peter Burton, who had been sent to the book auction to purchase as many of the judge's books as possible paid $501 for the Clarihew volume only because he fell for a young girl who pleaded that he not let another man get a hold of the book. Constance soon learns no less than six people seem to be after the book and will stop at nothing to get it. It is the bookplate inside that will turn out to be the cause of all the covetous plotting. When a man collapses in the law section of Darrow's from a mysterious hemorrhaging wound just after handling the book and then later dies in hospital the death is deemed a possible murder. All the bookstore employees fall under suspicion. A criminal investigation is launched to uncover the weapon which apparently vanished from the store, the identity of the man who died, the identity of the young girl who fainted and pleaded with Peter to "Keep it for me," and whether or not the death was in fact a deliberate murder. All the while Constance has her catalog she needs to finish before an impending printers' strike explodes and the store is left without any publicity prior to the mad Christmas holiday shopping days. Yet even with the deadline looming over her head she cannot stop herself from doing a bit of independent detective work. She is compelled to solve the mystery of the bookplate and why it seems to be so prized among the many people who have been pursuing it and the Clarihew law book.

Constance makes for a sharp witted and sharper tongued narrator with little tolerance for flighty shop girls, her former harridan of a supervisor Miss Wilkes, or the manipulations of damsels in apparent distress. She's also a bit of a snob. There is a very funny scene in which she disparages the "fad" of crossword puzzles which has so hypnotized two of the other women characters. As an employee she is a mental match for her Scottish boss, Mr. Roberts the manager of the store who alternately applauds and insults her for being too intelligent. It is mainly due to her presence that The Colfax Book-plate is such a fast moving, absorbing read.

Miller has more than a few surprises in store. Like the maze-like aisles of Darrow's Constance finds herself travelling deeper into a circuitous world of deception, thievery and betrayal. The Clarihew volume and the bookplate itself will reveal multiple layers of secrets. And that's a literal image not a figurative one. The climax of the book provides for several eyebrow raising surprises, and a few that made me laugh, in a book already brimming with twists and sudden reveals.

While Miller's writing style suffers from a heavy Victorian syntax overloaded with descriptive clauses and asides set off by commas, the story is still engaging and uncommonly modern for a book published in the late 1920s. She endows Constance with a very modern sensibility that foreshadows the feminist heroines who populate the mysteries and Gothic Romances of the 1970s. In fact, all of her female characters seem to be stronger than the men. Though Miller has a policeman detective, Benjamin Almy (his rank is never mentioned), among her cast he does most of his detective work offstage. It is Constance, Nancy Burton (Peter's sassy garrulous sister) and a seemingly dumb blond shop girl named Daisy Abbott who all do clever girl sleuthing on their own offering up sections of the complex solution at key points in the tale.

One person who cannot be overlooked in the supporting cast is the under-appreciated Ulysses S. G. Jackson, Darrow's superstitious janitor. He may speak with one of those phonetic drawls so often found among black characters in books of this era, but he will prove to be one of the most knowledgeable and honorable offstage detectives in the entire book. Like Peter who withholds a bit of information in order to protect Julia, the fainting woman, Ulysses too has some personal knowledge he keeps to himself for the entire length of the story only divulging it at the 11th hour when he is sure the person he is protecting is in the clear.

And now the bad news. (Oh yes, you knew it was coming.) Agnes Miller's finely constructed novel is yet another of those scarce detective books. My catalog notes tell me I bought mine back in 2005 from a well known, reputable mystery novel dealer for $30. Now the mere dozen copies offered for sale range from $18 for an ex-library copy to $135 for a book that sounds from its description to be in comparable condition to my own copy with its discolored and spotty boards. Perhaps if you're lucky you may stumble across a cheap copy or one in your local library. It was published originally in the US by Century Company and one year later in the UK by Ernest Benn so there is equal opportunity of finding one on both sides of the Atlantic.
Posted by J F Norris at 11:47 PM