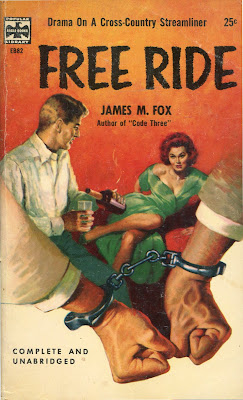 Leo Maxwell, an ex-boxer, is being transported via train to Phoenix where he will be tried for manslaughter.  Two cops, Jerry Long and Chuck Conley, are in charge of his safety.  En route they learn that Maxwell managed to win over $20,000 on a long shot bet at a horse racetrack.  Even before the train leaves the station an attempt is made on Maxwell's life.  Sgt. Long handles the three goons with the usual pulp fiction style fistfight.  Turns out they are members of a Sicilian syndicate.  Long and Conley try to get Maxwell to confess the racetrack winnings were a gang related con game. Maxwell refuses to cooperate. Everyone on board seems to know that Long and Conley are cops.  Maxwell in handcuffs seems to be the give away.  As the train continues its journey from New Orleans through several Texas towns onto Arizona more attempts are made on Maxwells' life.

Like the best of the paperback originals that specialize in crime we get the usual ingredients for a quick read. Fistfights and action galore. Lots of James Hadley Chase style ersatz American dialog meaning it's littered with wiseacre period slang that no real person ever used. A myriad of suspicious characters make trouble for the two cops.

Among those characters are:

Homer Finch -- a salesman on his way to a cosmetic convention.  He spends much of his telling stupid jokes and playing pranks with novelty gag items. 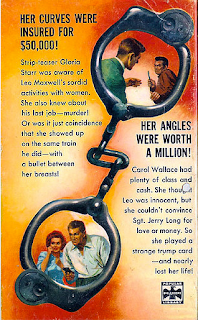 Gloria Starr -- burlesque stripper, con woman who gets Carpenter to pay for her meal in the dining car when she "forgets" her purse

Carol Wallace -- claims to be Maxwell's girlfriend. Attempts to bribe Long with sexual favors in order to free Maxwell.

Long sends orders to headquarters to run criminal background checks on all these passengers and a few more. He suspects that one or more may be involved in a plot to either free Maxwell and get him off the train or to kill him before the train arrives in Phoenix.  It turns out he's right, but just who is involved is rather hard to figure out. And there are indeed a few surprises before this action tale comes to its violent finale with plenty of fists and bullets flying.
Posted by J F Norris at 10:51 AM