The Pass Beyond Kashmir - Berkely Mather 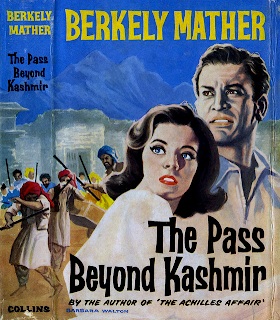 The P.R. materials I received with my copy of the recent reprint of The Pass Beyond the Kashmir (1960) call it a "ripping yarn." While that is a perfect marketing catchphrase it is something of a disservice to this remarkable novel by John Weston-Davies, former military man who served in both Australia and India. Writing as "Berkely Mather" Weston-Davies created three series characters Peter Feltham, British spy Jack Wainwright, and Idwal Rees who debuts in this book. Amazingly, this action packed story is Mather's second novel. It's a masterfully balanced story that blends literate prose, spirited characters, cultural insights and suspenseful action. So impressively done The Pass Beyond the Kashmir is practically a textbook on how to write the perfect adventure page-turner.

The story takes our hero Idwal Rees through a rugged adventure marked by multiple pursuits, captures and escapes as he and an Australian opportunist named Smedley try to make their way from Bombay to Kashmir. There they plan to meet George Polson, a retired British major, who will lead them to the location of documents that may reveal the source of a hidden oil reserve. Aided by Rees' servant Samaraz, a strong-willed Pathan, the two men get off to a bad start when the major vanishes from his home where his wife has been brutally attacked. The local police begin to show an interest in the major's disappearance and based on the probing questions Rees suspects that it may have something to do with the documents. As the three continue eluding and escaping a variety of villains it is clear everyone wants the major and/or the documents. At one point Rees quotes an Indian proverb which aptly sums up the seemingly endless chases: "The Indian night is blind for the watched, but has a thousand eyes for the watcher."

Over the course of these densely packed 190 pages the reader will also be tutored in all things Indian and Asian. Mather is especially adept at interspersing into the action a series of lessons in everything from the Indian caste system to the making of Tibetan butter tea. Below are a few more of the numerous tidbits picked up: 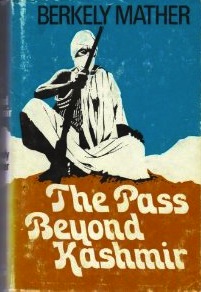 The characters are alive and human and so unexpected in how they behave. Along the way Rees will meet a mysterious Sikh of unknown allegiance; Yev Shalom, "seller and buyer of anything" especially information, who is eerily omniscient in how he obtains that information; a tenacious and very clever British nurse who sees through one of the many disguises Rees and Smedley must adopt; a blind brigadier general who helps guide them to Kashmir; and the requisite master criminal who will turn out to have a surprisingly close connection to Rees. These and several others make for a even more entertaining "ripping yarn." 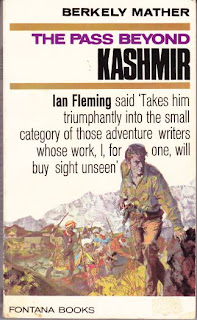 Humor is also abundant amidst the more serious aspects of the story's violence and politics. Smedley becomes the object of Rees' anger several times and Rees deals with his frustrations and sublimated rage when he chooses to give Smedley a variety of humiliating disguises. He at first shaves his hair and eyebrows, uses shoe polish to darken his skin, and passes him off as a lower caste servant. Pathan insults Smedley further by saying he looks like a dung seller. Later, Smedley is forced to wear a burkah and pretend to be a woman. When he takes advantage of this disguise by attempting to board one of the women only passenger cars on a train all hell breaks loose. It seems his physique and gait give him away immediately.

The Pass Beyond Kashmir is one of the many reissued adventure thrillers released by Top Notch Thrillers, that fine imprint of Ostara Publishing. Mike Ripley, editor of the series, has once again uncovered a whopper of a tale, an exciting page turner to rival anything published today. In fact, I prefer something like this book over the padded doorstop tomes we have nowadays. Mather's story not only has the ring of truth and authenticity thanks to his many years of living in India he tells his tale with hardly one diversion into the Land of Backstory and limits himself with psychological character explanations. As I mentioned before this book is a wonderful primer on how to write a thriller, how first and foremost in this genre it is how action can reveal character better than long drawn out explanations of past life experience. An adventure tale more than any other genre should have immediacy and should take place first and foremost in the present. The Pass Beyond Kashmir is as immediate as they come.

The Espionage and Adventure Novels of Berkely Mather

Peter Feltham appears in:
The Achilles Affair (1959)
With Extreme Prejudice (1975)

Mather has also written historical fiction, TV scripts and was the screenwriter for Dr. No and The Long Ships, an unintentionally campy sword and sandal feature about Vikings and Moors in search of a legendary golden bell.  I may write up a review of that movie which he co-wrote with Beverley Cross.
Posted by J F Norris at 11:47 AM