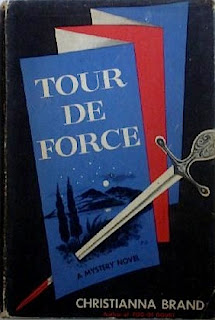 In the opening pages of Tour de Force Christianna Brand's detective Inspector Cockrill is seated in an airplane preparing to land in Italy. His seatmate is terrified of flying and buries her head in his chest and clutches at his arm. She then apologizes for overreacting, plucking her red dyed hair off his sleeve "I seem to moulting all over like a red setter." She examines the half red/half brown strand and adds 'Well, like a setter." And Cockie thinks to himself "She's one of Them." A tourist, that is. He is already tired of the group with whom he will be travelling for the next week. Brand has a lot of fun satirizing packaged vacation tours in the first few chapters. We are treated to a nightmare group in the exposition that include Cecil Prout, a flamboyantly gay fashion designer; Miss Trapp, a lonely rich woman being pursued by Fernando, the swarthy and attractive Italian tour guide; Leo Rodd, a one armed ex concert pianist and his devoted but fawning wife Helen; the red haired brassy young woman turns out to be Louvaine Barker, a famous novelist; and rounding out the group is Vanda Lane, a reclusive young woman with romance on her mind.

There is much poking fun at the pitfalls and comedy of travelling in groups: bad hotels, bad meals, the person with the weak stomach, the cheapskate, the complainer and all the types found in a tourist environment. But it's not all fun and games. The final sentence in Chapter Two warns us that the group is en route not only for Siena, Pisa, and the island of San Juan de Pirata but also en route for murder. One of the group soon turns up dead. 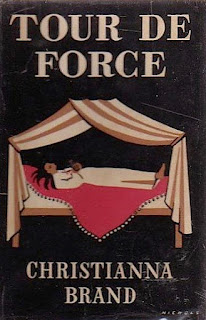 It is Vanda Lane who is found stabbed in her hotel room and arranged in a manner resembling some sort of  ritual.  She is wearing a wet kimono and is resting atop a crimson colored shawl with her still wet hair fanned outward. Her hands are clutched around an ornamental dagger protruding from her chest. Also, a notebook has been removed from her room. When it is found it contains intimate facts and secrets on her fellow travellers. Could it be that the loner who seemed to make no friends among the group was actually a blackmailer?

Adding to the mystery is the fact that it seems that the only people with a motive for killing Miss Lane were all in view of Inspector Cockrill at the time of the murder. Three people were on the beach sunning themselves, one man was on a raft in the ocean, another in a duck boat pedaling through the sea, and the sixth person was seated next to Cockie varnishing her toenails. No one could've left the beach or the water without being seen by the policeman. How then did one of these six people manage to get into the hotel and stab Vanda Lane?

Many Golden Age writers have trademarks in their novels. Ellery Queen had the dying clue, John Dickson Carr was the master of the locked room, and I am beginning to think that Christianna Brand is the mistress of the multiple solution murder mystery. As in Death of Jezebel where the accusations and solutions bordered on parody and Suddenly at His Residence where the suspects themselves turned sleuth and came up with ingenious solutions to the murder, Tour De Force is another example of this talented author setting out to prove every suspect could be the murderer. Not only does Inspector Cockrill challenge each suspect by pointing out how they could have evaded his sightlines, escaped from the beach or sea, and killed Vanda, but later the characters turn on each other with several accusations combined with some clever rearranging of the events to come up with at least three more variations. There are multiple arrests, too, and the first to be taken into custody is Cockie himself. Luckily, the police guard is a lazy incompetent who forgets to lock the cell and the inspector simply walks out of his cell, up the stairs, and past the sleeping cop to return to the hotel.

Just when you think Brand has exhausted her supply of possible murderers and presented us with the final solution she has one more trick up her sleeve. The finale is worthy of the best of John Dickson Carr or Agatha Christie. It's a stunner. And it's one that still adheres to the fair play rules. Astute and canny readers can spot the correct clues (and there are many) and arrive at the correct solution.


This was my redemption review for the Italian leg of the Crime Fiction on a EuroPass Challenge. I may not have liked Massimo Carlotto, but I can highly recommend this murderous trip the island of San Juan de Pirata. Aside from Brand's masterful Death of Jezebel I think this is her best detective novel of the impossible crime subgenre. It is, just as the title tells us, her tour de force.
Posted by J F Norris at 10:25 PM