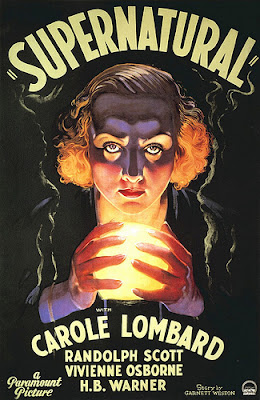 The "Carole-Tennial (+3)" blogathon celebrating the 103rd birthday of Carole Lombard started October 6 and today is the last day. Leave it to me to get my contribution in under the wire. Anyone interested in furthering their knowledge of this fine actress and her brief two decades in movies should go to the Carole & Co. blog for wide selection of reviews of her films, impressions about the actress and her life, and other writings and musings.

I chose to watch her little known supernatural thriller aptly called Supernatural. While elsewhere on the internet the film has been dismissed and in some cases reviled I found it an intriguing and odd film. Of course it helps if you're an avid fan of this entire genre as well as someone who enjoys watching the acting styles of the early movies. On the whole it's a mixed bag of a movie but with a striking production design and atmospheric camera work that brings to mind a phrase coined for the musical version of Lombard's well known 20th Century. When that movie was turned into a stage production one critic jibed: "It’s ominous when an audience leaves the musical whistling the scenery." Similarly with Supernatural the sets, the cinematography and the overall look of the production are more interesting than the story or the acting.

The story is an unusual blend of science fiction, ghost story and crime film.  The opening with its three epigraphs emblazoned across the screen is spooky lettering promises us a story dealing with the dead. The delivering warnings taken from three different religious texts (Christian, Asian and Islam) about the dangers of dealing with the dead, of opening graves and "casting out unclean spirits." This is followed by a melodramatic montage composed of newspaper snippets and voice-overs informing us of the impending execution of Ruth Rogen (histrionic Vivienne Osborne), a murderess who "killed three of her lovers in a wild orgy." Shortly thereafter we're in the office of the prison warden who is in conference with Dr. Houston (H.B. Warner), a psychologist with interest in the psychic world. Houston convinces the warden to donate Rogen's body to science - specifically Houston's own experiments. He has a theory about evil being transferred from a soul at the point of death. Houston points out that there often are crime waves committed just after a criminal is executed. He believes that these imitators have been possessed by the spirit of the executed criminal. He goes on to explain his experiments with "nitrogenic rays - ultraviolet rays given off by the body" and wants to capture Ruth's evil personality to prevent it causing more harm. The Warden responds, "Hmm. Seems kind of creepy when you think of it." Sadly, this is the level of the scriptwriting throughout the movie. 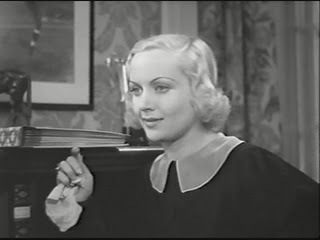 Then we get to know Paul Bavian (Allan Dinehart in an unctuous performance) a phoney spiritualist who combs the newspapers looking for wealthy individuals who have recently suffered a death in the family. He preys on these wealthy people putting on his fake spook shows and draining them of their hefty bank accounts. His latest mark is Roma Courtney (Lombard), recent heir to her dead millionaire brother's fortune. Bavian has broken into the Courtney home, found where her brother's body was being kept for the wake, and made a death mask of his face for use in a fraudulent seance later in the movie. Bavian we learn was also acquainted with Rogen and was responsible for turning her into the police.

The story thus connects Ruth with Bavian who is connected to Roma. Anyone familiar with these old fashioned movies can tell exactly what is going to happen when Ruth consents to donating her body to science with dreams of reaching out from beyond the grave and carrying out a cruel vengeance. It is only a matter of time before Roma, who just happens to be a patient of Dr Houston, visits him interrupting him in his outrageous experiment just at the crucial moment. 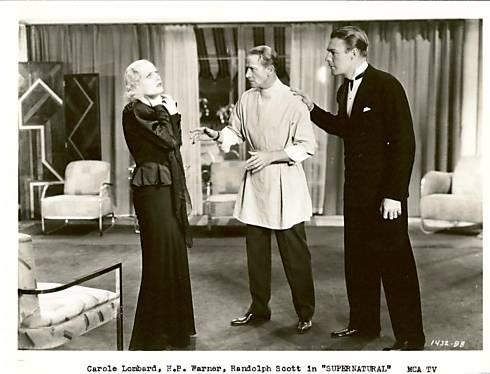 The bulk of the movie is run-of-the-mill. Padded with sentimental scenes of Roma longing for her dead brother, lame comic relief from the gluttonous family lawyer, expository speeches that set up the supernatural elements, and the usual close-ups of newspaper articles filling in other story elements it doesn't seem like it will amount to much of anything. Hackneyed writing doesn't help matters much either. The performances -- especially Lombard who is given nothing much to do but stroll around despondently for the first half -- are mostly lackluster. Only Dinehart and Beryl Mercer as a drunken blackmailing busybody of a landlady offer anything remotely interesting. It is only when Roma visits Dr. Houston's plush penthouse equipped with glass walled laboratory and the transferal of Ruth's spirit to Roma's body takes place that the movie finally picks up.


Lombard now having to convey the possession of a hysterical killer bent on murderous revenge shows some of her considerable acting talent here. Her bland portrayal of the doe-eyed, depressed and drippy Roma gives way to a fast talking, mean spirited vamp. The camera zooms in on close-ups of her malevolent facial expressions giving Lombard a chance to display her skill in the raised one eyebrow trick. Her scenes with Dinehart in Ruth's apartment are the best in an otherwise mediocre movie.

When the script dispenses with dialog and relies solely on the camera and the actor's faces to tell the story the movie is also at its eerie best. There is a scene following the blackmailing landlady's murder that is a good example. Bavian kills without thinking and knows that in fifteen minutes Roma and her boyfriend will be stopping by for a seance. He looks out and watches the speeding trolley cars passing by on the tracks below his hovel of an apartment. We hear nothing but the sound of the train wheels clacking on the rails as rain continues to fall steadily. A close-up of the train's sparking wheels is intercut with Bavian's leering face. He looks over his shoulder back to the room where the body lies on the couch. The scene fades out and fades back in on the clock showing a passage of fifteen minutes. the body of the landlady is nowhere in sight but we know exactly what Bavian did with it. 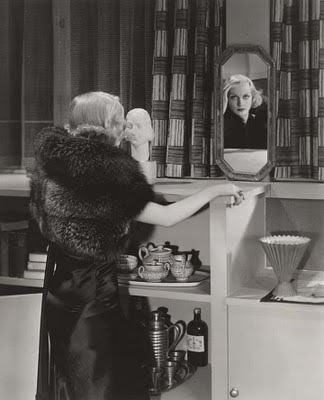 This is certainly is not among the best of Lombard's films, but Supernatural is not the stinker that most people make it out to be. Fans of old time movies will find a few very well done scenes to make it worth your while should be lucky enough to find a copy. The movie still is out there in VHS video format and you can probably find a used copy. A professional DVD, however, does not exist. The only DVD versions are available from a few independent online sellers. I got mine from someone who calls himself Movie Detective. It's one of the better homemade DVDs I've purchased and the print quality is exceptional - probably made from the old MCA VHS videotape. Supernatural is a curiosity for sure. For fans of these old thrillers with science fiction and supernatural elements I would say it's worth a look. Just don't expect a masterpiece.
Posted by J F Norris at 11:43 AM