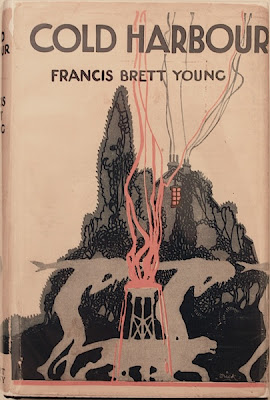 October is here and although is seems like mid July with our unseasonably warm weather out here in the Windy City it is still, as we all know, autumn. It's the season of transformation, apple harvesting, pumpkin patch frolics, and Halloween. In tribute to this time of ghoulies and ghosties and things that go bump in the night, each Friday this month I will be writing about my favorite supernatural novels of days gone by. Today I am saluting the grandaddy of all the literary haunted house novels - Cold Harbour (1924) by Francis Brett Young.

Dr. Ronald Wake and his wife Evelyn have fled England after a horrifying experience. They are in Italy attempting to return to a normal life. During a serenely peaceful summer night the topic of conversation turns to superstition and the existence of evil. Prompted by the other guests lounging on the hotel terrace to tell their story when Mrs Wake mysteriously alludes to their past experience, the husband and wife take turns recounting their visit to the decrepit and intimidating house known as Cold Harbour. 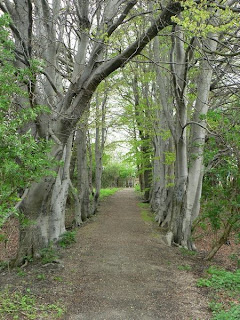 Young makes the most of the barren landscape of abandoned collieries and farmland gone to waste to enhance the eerie mood. In several passages reminiscent of the best of Radcliffe or the Brontes, Young describes the Black Country surrounding Cold Harbour and compares it to the Cotswold countryside the Wakes passed through on their way to the house. Whereas the beech trees of the Cotswold "had trunks that showed a sheen of steel and platinum" and "shone like pyramids of flame" the same species of tree around Cold Harbour "were black and dull as soot" with not a leaf left on them.

[The trees] stood up stark naked and motionless, as though they were dead, a complete circle, dipping over the brim of the ridge like a fairy ring; and as we passed within their circumference it seemed as though we were stepping out of this life and into another of ghostly silence.

As the Wakes approach the house things only seem to get worse. The gates have been torn off their hinges ages ago, the stone lions are crumbling, and the long drive is overgrown with weeds. When the finally arrive at the house their first alarming sight is that of a ghost-like old woman skinning a rabbit at a kitchen table in front of a long window. Not exactly a warm and inviting vision after passing through such desolate and foreboding terrain, is it?

Inside they meet Humphrey Furnival and Jane, his wife. Coaxed by Evelyn Wake into revealing the house's  secrets Mrs Furnival talks of some strange events attributed to a poltergeist her husband jokingly refers to as Jerry. Suspenders have been buttoned on a visitor's par of trousers, a watch set by a bedstand turns up in a different part of the room in the morning among other odd happenings. Furnival then leads Dr. Wake to the library where he displays his collection of books on witchcraft, psychic research and madness. He goes on to discuss his hobby of digging around in the ancient graves dating back to the Roman occupation of Britain. He shows the doctor some of the artifacts he unearthed - a ceremonial dagger and an altar with an inscription to the pagan goddess Astarte. Furnival is gleefully macabre in showing off his possessions and Wake is disturbed by his boisterous laughter when describing and handling the objects. Despite finding Furnival a compelling personality, a sometimes charming and a "powerfully energetic spirit," Dr. Wake finds himself growing ever fearful of his host. The intensity of his feelings pour out in antipathy.


Far more definite than any thought I could formulate was the evidence of my horrified skin and the feeling of hatred -- that, at least, is the right word -- which now swept over me: hatred for the house, the garden, the presence of Mr. Furnival himseIf.

...I lost consciousness of every blessed thing but an overpowering and murderous desire to destroy Furnival as he stood there [in front of the fireplace] toasting his calves. Before that I'd been puzzled by him; if I'd disliked him the dislike had been quite indefinite, but now my whole brain seemed to be swept up into a positive conflagration of hate.

As the story progresses Dr. Wake and Evelyn find themselves falling under the spell of the sinister and depraved Humphrey Furnival. Evelyn in particular becomes the object of Furnival's attention. Slowly it is revealed that Cold Harbour plays host to a malevolent presence and Furnival seems to have the ability to control it and inhabit it. This is a book that would foreshadow such similar contemporary novels featuring a "house of evil" as The Haunting of Hill House, Burnt Offerings, Hell House and The Shining. Young, however, manages to create more creeps and thrills with the sheer power of his language. He does not need the usual material horrors or gorey action sequences to spook his reader. And the powerful character of Humphrey Furnival, a nasty piece of work indeed, is the perfect embodiment of evil in a tale that requires a monster of a villain. 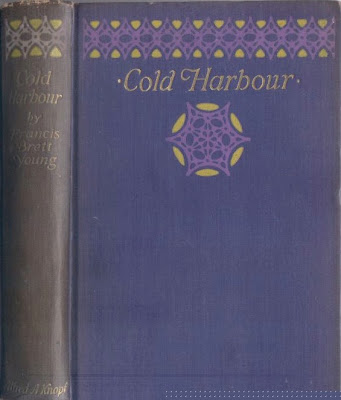