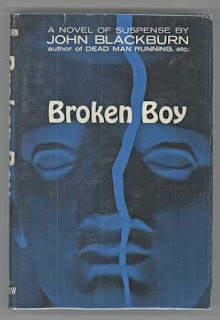 Readers who enjoy the Peculiar Crimes Unit detective novels of Christopher Fowler and are impatient for the next Bryant & May adventure into the bizarre and macabre should turn to the works of John Blackburn as a more than suitable substitute. His books are amazingly similar in structure and theme to Fowler's work. Blackburn also shares Fowler's interest in arcane legends and folklore as well as the secrets of old London's infrastructure and architecture. I have to thank Mike Ripley for sending me a promo on Top Notch Thrillers, a reprint line he edits for Ostara Publishing. In that email there was some info on Blackburn that prompted me to investigate this writer. Though Blackburn wrote straight crime and straight espionage as well, it is his own special blending of crime supernatural and espionage that has made him according to the Top Notch Thriller publicity "the link between Dennis Wheatley and James Herbert." 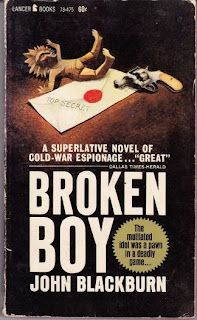 One of the most intriguing of Blackburn's thrillers is his fourth book, Broken Boy, published in 1959 in his native England and released in the US in 1962. The melding of crime, detection, and the supernatural ranks with the best of not only Fowler but groundbreaking genre-benders like Dennis Wheatley, A. Merritt and the stories of Seabury Quinn. While Blackburn is not shy to indulge in pulpy thrills like those last three writers he is more interested in the psychological motivations of characters who employ the occult and supernatural for their own selfish purposes.

The book begins as any standard detective novel with the investigation of a crime. What at first seems like a brutal murder of a prostitute dumped beneath a bridge by an angry and savage john will prove to be something far more complex. General Charles Kirk and his fellow Home Office agents, Michael Howard and Penny Wise, are called in when the prostitute is identified as Gerda Raine, a former East German spy, with a particularly callous and sociopathic nature. She is linked to the selling of British government secrets in exchange for a British passport that would allow her a freer life. But while the reader may think this will morph into a spy novel he will be dead wrong. When Kirk visits Gerda's apartment he meets her very strange landlady and the landlady's son. He also finds a weird idol in her room.

The title refers to that idol - a disturbing figurine of apparently African origin with blind eyes and unnaturally disjointed arms and legs. It is this object that leads Kirk and his team to the discovery of a strange cult in the town of Minechester. With the help of an anthropologist and a medical doctor Kirk learns that the idol is tied to ancient black magic studies with their roots in the French Revolution era that made their way to Madagascar where purportedly they were adopted by the very real historical figure of Ranavalona the Cruel.

Mothers and sons play a big part in the story. Each mother Kirk and his team encounter has the odd habit of referring to her no longer living husband in this fashion: "My husband? Oh, he...died." In each case a slight pause before the word "died." Kirk only realizes this strange speech pattern very late in the book. It's a subtle clue to a larger and nightmarish revelation.

There is a point in the book where one of these women reveals her true nature and the entire book shifts in tone. It's a real "Aha!" moment for the reader. What seems like just another detective story with some bizarre plot elements instantly transforms itself. From this point on I kept thinking of the old TV series The Avengers. The finale, however, is something straight out of a 1960s Hammer horror movie or even the weird menace pulps of the 1930s. There is a perfect scene where one of the villains shouts out "You fool. You wretched, interfering, foolish fool." And she punctuates each adjective by slapping her bound captive across the face. How's that for a throwback to the pulp era?

Broken Boy is the kind of book I crave. It has the perfect blend of action and detection, the surreal and the supernatural, and the utterly bizarre. When I come across something as weird as this I want to find every other book the writer has written and read them all. As a matter of fact I've already ordered four more Blackburn supernatural thrillers and eagerly await their arrival in my book crammed house.

Reviews of other John Blackburn thrillers on this blog are hyperlinked in the lists below.