LEFT INSIDE: U of I Gym Locker Receipt

One of the bonuses of this ephemera collection of mine is learning about Chicago's past when I go to write about some of the more interesting things I find left inside my books. Today's item prompted me to find out more about a gym that apparently was located at the now refurbished tourist playground known as Navy Pier. These days it's the home of the giant Ferris Wheel, several shops and restaurants, and the amazing Chicago Shakespeare Theater. Back in the day Navy Pier had an entirely different purpose than entertaining the masses.

Here's what I found in one of my old mystery books. (click on the images for full size) 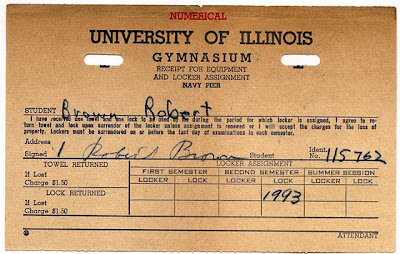 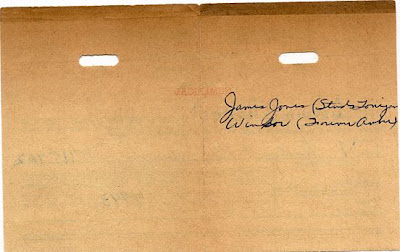 Note that while young Mr. Brown got the author for Forever Amber correct he messed up on Studs Lonigan's creator.  It's James Farrell, not James Jones who wrote From Here to Eternity and The Thin Red Line among other books dealing with World War 2 and its aftermath. It's this error of Brown's that can easily date this slip of paper at least to the early 1950s when Jones was a bestselling author and the famed movie version of From Here to Eternity was extremely popular.  It may be from the mid 1950s, but I doubt it's from the 1960s.

A diligent Google search (using the correct combination of search terms, of course) revealed to me that the University of Illinois did once have a branch of the school located at the old Navy Pier. It was open from 1946 to 1965. They shared the space with the Chicago Police Traffic Division, the North Pier Terminal Company, and a few military tenants. 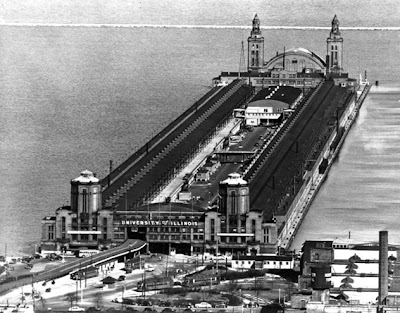 Here's one of my favorite bits from the article I found at the UIC website devoted to their university's history:

On October 21, 1946, the new branch campus opened to about 4,000 students. Officially called the University of Illinois, Chicago Undergraduate Division (CUD), students described the campus as the “narrowest university in the world,” a “sideways skyscraper,” the “horizontal cathedral of learning,” and “Harvard on the Rocks.”

For more on the early history of the University of Illinois at Chicago go here.

To learn about Kathleen Winsor's "dirty book" Forever Amber go to your local library. Although it was at one time a book banned for it's daring sexual frankness, it's sure to be on the shelves there now. It's hardly pornographic. Daring for its time is even a stretch. As usual, the people who wanted to ban it were the ones with the problem with sex. It certainly wasn't the book. Wonder what young Mr. Brown thought of it...if he ever found and read it.
Posted by J F Norris at 11:58 AM