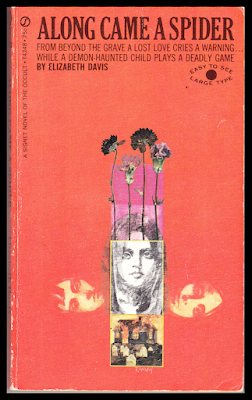 I'm putting the sinister back into the Pretty Sinister Books blog this month as I tear through a pile of old horror novels and detective novels with supernatural and occult content.  Today's post also touches on the 1970s mania of the demon child in popular horror fiction.  I've read so much of this kind of book over the 11 years this blog has been around that I've finally decided to create yet another tag to label them all. If this is a subgenre in horror and mystery fiction that lights your chandelier you can click on the "Demon Child" tag at the end of this post and read more about them, perhaps find some obscure books dealing with killer children and demon-like adolescents.

Last month I had a mystery novel that incorporated a demon child motif -- well, more of a precursor to the Bad Seed trope -- in I Am Afraid (1948).  Today we go from the sublime and restrained domestic horror of that book to the outrageously ridiculous, horror bordering on parody in Along Came a Spider (1970).

Stephen, the nasty tween in I Am Afraid was 11 years old.  The bad kiddo in Elizabeth Davis' novel (apparently her sophomore effort in horror fiction under a second pseudonym) is remarkably only 9 years old. I found it incredibly hard to believe Anne Bishop, the evil little girl, was this young because for much of the book she comes across as a 45 year-old worldly wise woman.  But as you get to the the over-the-top finale our narrator posits her theory of why little Anne is such an adept sorceress.  She's basically the Wolfgang Mozart of black magic.

However, I'm getting way ahead of myself...

Inspired no doubt by Rosemary's Baby (1967) which almost single-handedly launched this new subgenre about children spawned from Satan and children possessed by demons, Along Came a Spider has been overshadowed by more well known (and better written) books employing this popular and by now hackneyed horror motif.  We have a wiseacre of a narrator in Eve Mercer whose colloquial voice is filled with idiomatic speech, sarcastic asides and a quasi stream-of-conscious narrative style that works against the suspense when Davis allows Eve to constantly interrupt her own thoughts. The narration is punctuated with dashes and ellipses as Eve trails off from one thought to the next like a distracted housewife running on a permanent caffeine high of extra strength Maxwell House.

The plot?  The Bishop family have moved in across the street and Eve fears her daughter Laurie has fallen under the diabolic influence of creepy little Anne, a primly dressed, too polite, too aloof miniature adult in the guise of a 9 year old girl.  Eve's first high-strung reaction to her daughter's new found friend comes when she learns that Anne is adept at painting. Laurie describes these paintings as nightmarish images of brutish monsters and other weird things she's never seen before.  They're so gory they look like they might have been painted with blood.  But Anne dismisses what was intended as an exaggeration by telling Laurie you can't paint well with blood. "It clots," says Anne's voice of experience, "and won't go on too smoothly."

The absurdity has entered the story early, my friends. This is only page 40!

There is an element of a detective novel in the story when Eve learns that the Bishop family knew a friend of a friend of a friend.  And so she hunts down some phone numbers and makes a couple of phone calls.  She reaches the boyfriend of a girl who died in an automobile wreck recently.  The young man tells Eve that his ex-girlfriend lived in the same building as the Bishops and ran into little Ann one day at the trash chute in the hallway. Anne was startled as she tried to shove something down the chute and quickly ran off leaving the object stuck. The now dead girlfriend went to see what Anne was trying to get rid of and found a mouse crucified on a handmade wooden cross. 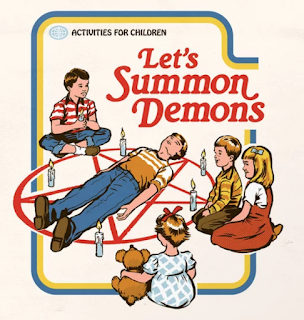 It only gets more insane from here on.

There are strange rituals that Anne teaches her playmates. A girl dies in a cemetery but not before uttering a mysterious dying message.  Laurie begins to act strangely.  She has nightmares, disappears from her bedroom and can't be found late at night. Eve continues her detective work by consulting books on witchcraft and demonology and learns that Anne has been teaching Laurie and the other girls the ABCs of summoning demons and makes sure she is nowhere in sight when those rituals are being performed.

Ultimately the book is self-defeating because Davis allows Eve's hysterical imagination to get the better of her too often. The narration grows increasingly hyperbolic and her frequent wisecracks undermine the horror making it all seem like a black comedy.  Eve is also susceptible to superstition and imagines that her husband Jim who recently died has come back from the dead. He sends her warnings in her dreams, she hears his voice intoning "Move away! Take Laurie with you!"  Unfortunately as soon as that ghostly element is introduced Davis never follows through. Jim's ghost literally fades away as soon as he almost appears never to be talked of again. Davis seems to be suggesting that Eve might be headed for a nervous breakdown. Are we to think that Anne is innocent of all that Eve imagines her to be doing? The preposterous finale extinguishes that doubt as quickly as a sorcerer blowing out a scented black candle. But you must discover that on your own...if you dare.

You can read for yourself how this madness unfolds and whether or not Eve is a nut job or Anne is the spawn of a demon by buying one of the many copies available for sale out there in this vast shopping mall we call the internet.  I turned up about a baker's dozen in both English and foreign language translations.  It's an odd book, entertaining to be sure in an Alternative Classic way, but never really frightening at all. 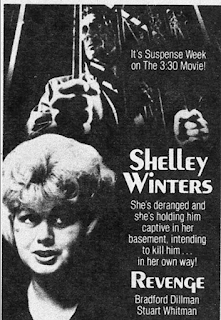 Elizabeth Davis was born Lou Ellen Davis in Pennsylvania and raised her family in Connecticut.  Her fascination with witchcraft and psychic phenomena led to two other novels of crime and occult:  Suffer a Witch to Die (1970) and There Was an Old Woman (1971).  The 1971 novel was adapted for TV in 1972 and re-titled Revenge!  The made-for-TV movie has a script by Joseph Stefano (best known for his screen adaptation of  Psycho) and stars Shelley Winters (in one of the many badass biddy roles she succumbed to in middle age) and Bradford Dillman.

I will be reviewing both There Was an Old Woman and the movie Revenge! later this spring. Stay tuned!