Today for a change we have a legitimate "Left Inside" find.  I was sort of cheating for the past couple of months using inscriptions and bookplates (and there are more of those to come in case you were suffering from withdrawal) due to a lack of ephemera left inside my books. A plethora of bookplates and POIs  began turning up as well as autographs so I started taking photos and have quite a file to choose from now.  This post card, on the other hand, was a delightful and long overdue find.

And the book itself is an even better find!  One of the best purchases I've made in years. It's an incredibly rare copy of Death Walks Softly (1938) --a Nigel Morland book, one of the Inspector Tandy detective novels he wrote using his "Neal Shepherd " pseudonym. At a mere $35 it was a steal. The description promised the exceptionally scarce dust jacket though based on the price clearly the seller had no idea about that. Overall, the description noted minimal damage and a book in good condition. A bare bones description to be sure and leaving a lot of room for my usually cynical imagination to fill in with all sorts of expected flaws. It could mean anything from genuinely good to battered and worn because "good" in the book trade does not mean good at all. Usually "good" translates to barely good. In truth the rating can be used to cover a condition that ranges from usual wear to beaten to hell.  This counterintuitive grading system that's been in place for centuries frankly still baffles me.

Imagine my surprise when I opened the package to discover a review copy in Very Good condition!  Minor wear, faint foxing to the foredges, some tanning to the edges of the dust jacket, but absolutely much better than a mere "good."

Laid inside I found a bonus not mentioned in the seller's description. A promotional post card from Constable & Co., the publisher, intended to be sent to professionals in the chemistry world. This makes me think that the book was a review copy and that the recipient was to send the card out to help promote sales. It also alludes to the fact that the book is the first in a new series although that fact is never mentioned outright. The front of the card has a miniature of the dust jacket illustration, but in black and white. The actual dust jacket is in three colors (blue, green and black). Click to enlarge for full enjoyment. You'll most likely have to enlarge the second one in order to read the message. 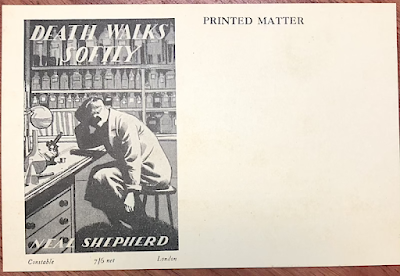 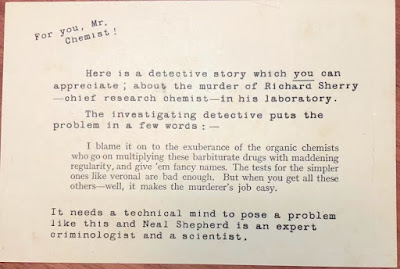 I own three of the four Neal Shepard books and have been promising to write about them for years now.  I think I've mentioned in passing the plot of Death Flies Low in a couple of comments over the past ten years, but still have not written up reviews of any of the books. They are all scientific detective novels with bizarre murder methods and unusual motives. Along with another brief series featuring Sgt Johnny Lamb that Morland wrote as "John Donavan" they are the best of his detective novels. Expect reviews of all the Neal Shepherd books starting in March and continuing through April. You'll have to wait for the photos of the beautiful copy of Death Walks Softly in the first review in the coming weeks.