MOONLIGHTERS: Will Oursler, Son of a Mystery Writer 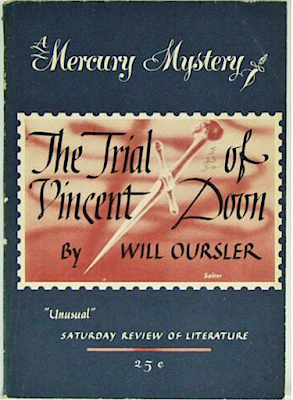 The first novel Will Oursler wrote was also his first detective novel. The Trial of Vincent Doon (1941) is presented as if it were an actual murder case and consists entirely of a facsimile of the court transcript accompanied by drawings, house plans, photographs and a full set of People’s Exhibits. No doubt this was inspired by the latest fad -- solve-them-yourself murder puzzles like those in the Baffle Books published by Doubleday Crime Club and the crime dossiers created by Dennis Wheatley and J. G. Links with titles like Murder Off Miami and Who Killed Robert Prentice? These dossiers included not just photographs of the evidence as in Oursler’s novel, but the actual evidence: pieces of threads, real fingerprint sheets, and in one case a cellophane envelope containing real hair. The Trial of Vincent Doon is unique as a first novel in its structure and gimmickry, but as a novel it is not very original nor even thrilling.

Philip Strong, is the criminal defense lawyer for Doon and is clearly modeled on Perry Mason. His partner James Matthew acts as the narrator/compiler and periodically makes commentary on Strong and the case in footnotes a la the Van Dine detective novels. The story involves a lover’s triangle that leads to a stabbing murder of strait-laced Edwin Hallet. The accused is a jealous painter, Vincent Doon, who was working on a portrait of Betty Van Eyck. Hallet was to marry Betty but Doon claims she never loved her fiancée, that she was really in love with him. 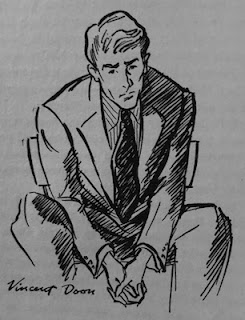 Though Oursler may think he was being clever and original l this book is heavily reminiscent of Gardner’s Perry Mason series, especially the later books which contain lengthy courtroom scenes designed mostly to live up to the formulaic TV series. Like the Perry Mason TV series and most of the books the most interesting parts of Oursler’s story are not the complicated plot, unusual motivations and surprise confessions on the stand, but the quirky trivia-laden testimony of expert witnesses. In The Trial of Vincent Doon the most fascinating part of the book, the most interesting to read, is the testimony of a telephone repairman!

He answers a series of seemingly irrelevant questions which are objected to by the prosecution but are allowed by the judge. Strong insists that the phone repair and the ringing of a phone at a certain time on the night of the murder is crucial to understanding the apparent alibis of people other than Doon. And so the reader is treated to some intriguing and true telephone repair tricks like a special code that repairmen can dial into any phone that will make the phone ring after hanging up. This is definitely true. As a teen back in the 1970s I was given that special code (which changed over the years and was different depending on where you lived in the US) by some savvy friend of mine whose father was in telecommunications. I would play tricks on my brothers and my mother all the time by dialing the three digit code, hanging up and leaving the house. 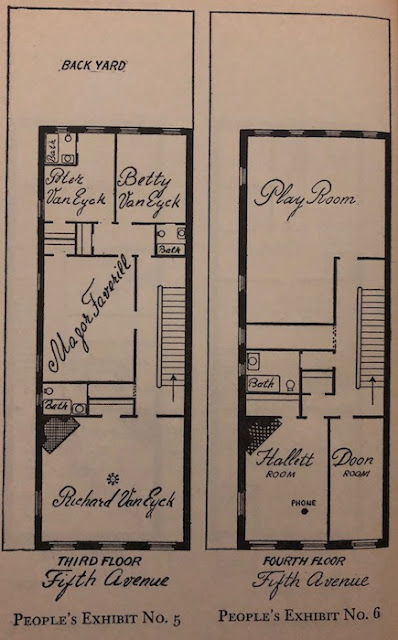 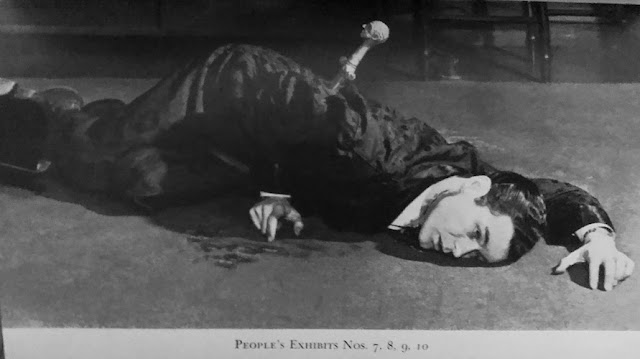 Apart from the telephone repairman’s testimony and frequent displays of Strong’s devious methods in getting witnesses to reveal their true character on the stand the book consists entirely of a run-of-the mill courtroom drama. Oursler even manages to manipulate circumstances so that the killer confesses on the stand. Perhaps one of the few innovations prior to it becoming cliché. And thanks for that can go entirely to the Perry Mason TV series. 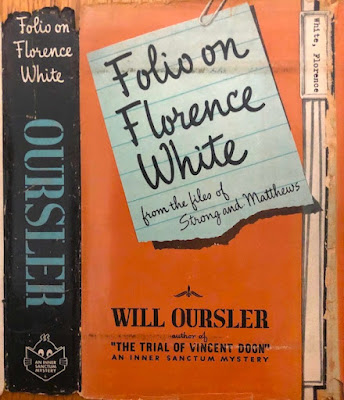 The cast of characters is relatively familiar in this story of wealthy businessmen, adultery, corporate malfeasance and the theft of company assets. Florence has been wrongly convicted of theft of securities two years ago and has recently been released from prison. Her rival who testified against her, Evelyn Emory, is killed by cyanide poisoning. Flo is arrested. Later, another witness from the old security theft crime is also killed. His wife thinks it is a heart attack. But autopsy proves poisoning by cyanide. Is someone getting even for Flo’s wrongful imprisonment? 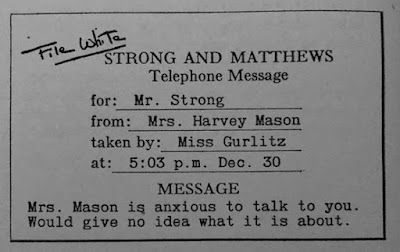 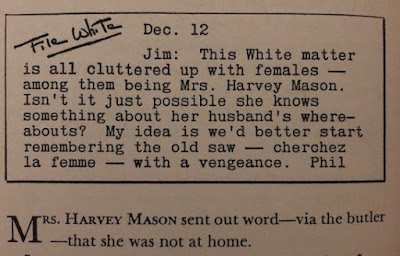 In one of the novel’s most memorable sequences Strong does some actual sleuthing at a potter’s field, based on an actual cemetery with a gruesome history (see THINGS I LEARNED section). A visit to Harlem gives us a scene relatively free of prejudice in which Strong and Matthews feel out of their element when they realize they are treated as outsiders and intruders. While there is an open hostility expressed Oursler does not go the 1940s PC route by making the white people seem like they know everything. Nor are the Blacks turned into ludicrous cartoons for comic effect. Strong and Matthews learn a lot about themselves in this scene and the Black characters are depicted with sympathy and wisdom.

Complicating the story of Flo’s supposed guilt in the murder of Evelyn is the disappearance of Harvey Mason, owner of Mason Aircraft where she and Evelyn worked. A tramp dies with no form of identity found on his body and the after the legal limit of waiting for a relative to claim the body it is sent to a potter’s field. Strong orders an exhumation of the corpse thinking they can prove that the trap is actually Harvey Mason who was put into tramp’s clothing. When the coffin is opened, the body is gone. Shades of John Dickson Carr!

THINGS I LEARNED: The history of the island is described in detail which led me to check up on the story. Turns out Oursler merely changed the name to Planker’s Island and described it as having once been owned by a rich Dutchman named E. Van Dyrk Planker who after his death bequeathed the island to New York City for use as dumping ground for 'refuse and trashe.'  He based the setting on a cemetery located on Hart Island, written up lately in various online articles as “a place of strangeness and sorrow” and “New York City’s potter’s field.” The New York City Corrections Department maintained and supervised burials for in its earliest life the island was home to a Confederate soldiers’ prison. For decades after the Civil War prisoners were tasked with burying bodies of unclaimed corpses that had been consigned to New York City’s morgue. To this day prisoners still tend to the grounds and bury the dead on Hart Island, but the prisoners come from Riker’s Island as the prison on Hart Island is long since abandoned and fallen into ruins. Hart Island has also been used to bury HIV victims during the AIDS crisis and victims of Hurricane Sandy. Most recently hundreds of people killed by COVID-19 have been buried here. Oddly, these days Hart’s Island is under the direction of the New York Department of Parks and Recreation but the public has never been able to visit. This may be changing soon in light of the consequences of the pandemic. 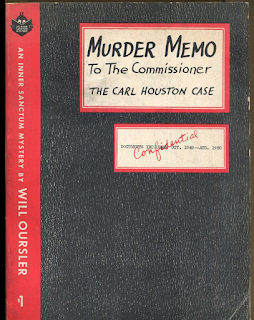 THE AUTHOR: Will Oursler (1914-1985) whose work was previously featured and discussed here back in 2015 was the son of mystery writer, journalist and Catholic spokesperson Charles Fulton Oursler, better known to vintage mystery fans as “Anthony Abbot.”  Oursler, the son, also made his living in journalism as a war correspondent, appeared on talk radio as a panelist and wrote several books, like his father, on religion or with theological themes. I call him a moonlighter because out of a total of 45 books (fiction and non-fiction) only eight of his novels qualify as detective fiction. Remarkably, I recently discovered he served as Vice President of Mystery Writers of America. So I guess he was very much involved in the crime fiction world and not really a dabbling moonlighter at all. In addition to the two books featuring Strong and Matthews as protagonists Oursler wrote two other novels modeled on these folios without the lawyer duo, two Gale Gallagher books in collaboration with Margaret Scott using the main character, a female skip tracer/private eye, as their pseudonym and as "Nick Marino" an additional two crime novels.
Posted by J F Norris at 7:15 PM