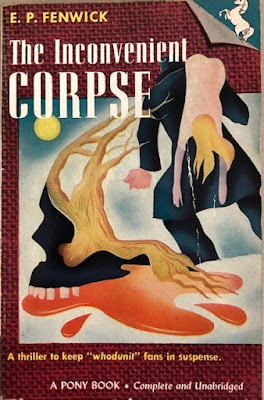 THE STORY: Maggy Simon, assistant to newspaper columnist Sebastian Evers, reluctantly agrees to accompany him to a Catksills retreat for his annual winter reunion with a group of friends he's known for years. TO everyone's surprise an actress acquaintance of Sebastian's shows up at the rendezvous point in New York City saying that Sebastian u; has invited her along to the Catskills.  He denies it a but she insists and sees it all as a practical joke. Maggy no longer feels like a fifth wheel as Anna Rose lives up to all the cliches of a flashy showgirl attracting the attention of all the men in the group. Jealousies and squabbles eventually flair up on their first night while the wintry weather worsens and threatens to leave the travellers snowbound in the cabin. Then Anna Rose disappears and terror descends on the cabin in the Catskills.

THE CHARACTERS: The Inconvenient Corpse (1943) was E. P. Fenwick's debut as a mystery writer. Maggy is our protagonist and we follow her thoughts and adventures as the novel is told from her point of view, but thankfully in not in first person so we avoid the dreaded HIBK flourishes that I was worried would infiltrate the story. Accompanied by her pet Boston Terrier Sammy Maggy often seems like she tiptoed out of a Tintin comic book. The dog of course is key to uncovering the truth about the actress' disappearance and actually leads Maggy to finding the dead body that gives the book its title. For the most part Maggy escapes the trappings of the usual HIBK heroine. Though she is not constantly regretting what she should have done, she does suffer from Hamlet-like indecision and makes some foolish mistakes in deliberating over her choices and waiting too long reveal the truth. Her overly cautious nature will complicate matters for Sebastian who is suspect number one with the police as well as the rest of the reunioin group. Still Maggy is smarter than your average HIBK gal, not at all ditzy, yet suspicious of everyone including her boss who we think she has a secret crush on.  Her eye wanders to the tall handsome Vic Homan, deputy to Sheriff Caldwell and he returns the flirty gazes when not speedily taking notes with his lightning speed steno skills. 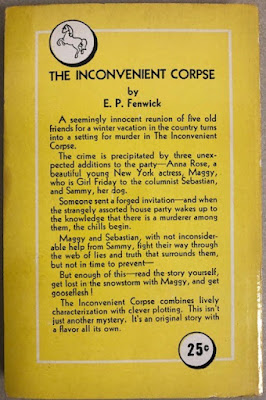 The suspects are pretty much familiar to readers of mystery fiction. Morgan Dillard, the the requisite glamor girl with an aloof and superior nature to provide some sexual tension between the young woman as they vie for attention of Sebastian. At first when Morgan offers to chauffeur Maggy up to the cabin we think she will be Maggy's friend and confidante, but Morgan clearly has ulterior motives. And there's an equally aloof young man, Prof. Harold Jameson, to act as Sebastian's foil. He's obviously attracted to Morgan. This all adds romantic and sexual entanglements in a tale that will eventually be about sex and jealousy.

Anna Rose, of course, is practically wearing a sign around her neck "I Will Be Murdered" when she enters the story. Her flamboyant extroversion, borderline vulgar talk, and shapely figure and stunning face arouse emotions in everyone, both men and women.  She's Trouble with a capital T that rhymes with C that stands for corpse. Poor Anna. She's the only character in the bunch with spice and life in her and we wish she would have had the chance to hang around longer, stir up a lot more trouble, before someone decides to send her to the Theater of Heavenly Footlights.

Rounding out the group of guests is the strange married couple the DeVries. Freddy first comes off as an offensive dirty old man making cracks about the younger women's attractiveness, then transforms into a prissy old man with indignant rants and "How dare you?" remarks that send the reader's eyeballs rolling. His wife is a meek and mild "nervous case" sheltered and protected by her self-righteous husband for the bulk of the story. Susan DeVries seems at first to be a charming New York sophisticate, but she quickly falls to pieces when Anna disappears then turns up dead. Susan spends much of the book confined to her bedroom and Freddy won't let anyone, even the police, near her.

ATMOSPHERE & INFLUENCES: The strength of the book lies not so much in its familiar, overdone plot, but in the atmosphere of terror and paranoia that infects the group as they learn that Anna's flight led to her murder. Suspicions arise and everyone turns on each other. Sebastian is the primary target of all the invective and acrimony as they think he committed a crime of passion. They all believe Anna Rose was his mistress and they had a fight and he killed her. Only Maggy is willing to disbelieve this rather outrageous scenario.

Given this very familiar storyline, it's all too easy to figure out what's going on and who the culprit is. No real fault of the writer who is very talented in conveying paranoid fear and true terror. Fenwick seems to be drawing form a couple of very popular writers of her time - Mignon Eberhart and Dorothy B. Hughes. Maggy is very much modeled on the kind of protagonists we find in Eberhart's novels of women in peril, drawn to a man suspected of murder and eager to clear his name. But it is Hughes' crime novels riddled with frissons of terror, psychopathic criminals, paranoia in wartime when anyone might turn out to be a killer or a spy that The Inconvenient Corpse most resembles. Maggy's discovery of Anna Rose's body is one of the most chillingly effective parts of the entire book, even if she is accompanied by a curious Boston Terrier. Fenwick allows us into Maggy's head at key moments in the book sharing in her fear, the claustrophobia of the cabin in a wintry landscape, and the hypocrisy of Sebastian's friends. The emphasis is on terror and not detection. When the story is focused on Maggy's fears and suspicions it is at its most engaging and thrilling.

Working with a such a small group of character in a confined setting usually lends itself to a puzzle that will be less than puzzling. What matters here are the fireworks of volatile emotions and the intriguing dynamics between a gorup of friends who find out they have little in common, too many secrets, and they begin to see the verity in the motto "an honest enemy is always better than a friend who lies." 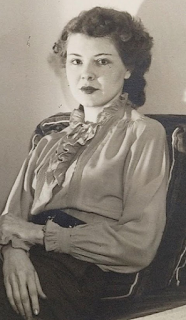 THE AUTHOR: Elizabeth Phillips Way (1916-1996) wrote both crime fiction and mainstream novels as "E. P. Fenwick" and later "Elizabeth Fenwick". In 1948 she befriended Flannery O'Connor when they were both living and working at the writers' colony Yaddo in Saratoga Springs, NY. I'll not bother wth anymore as Curt Evans has done a good job of digging up some tidbits on the life of Fenwick. You can visit his blog post for all you want to know to about her and view a few rare photos off the writer. He has also reviewed five of her books. The first three she wrote as E.P. Fenwick are cursorily discussed in this post. He also reviewed Poor Harriet and Disturbance on Berry Hill back in 2015.

EASY TO FIND? There are no modern reprints of The Inconvenient Corpse that I can verify. The book was published only in the US by Farrar & Rinehart and had one paperback reprint three years after the hardcover edition (Pony Books #62, 1946). The Pony Books edition is the most common in the used book market offerd at trelatively afforadble prices. The striking surreal cover illustration is most likely the work of "Im-Ho", the duo of Sol Immermann and Lawrence Hoffman, prolific book cover illustrators throughout the 1940s. For the short lived history of Pony Books (only 22 books over it's one year of business) see this in-depth article and bibliography by book collector and historian Kenneth Johnson.