Busy planning a vacation and tending to our rooftop garden (splendiferous photos coming tomorrow!) so I've little time for a new post. Here's a rerun for you instead, a review originally posted back in 2011. This is one of my favorites by Cunningham, a sorely underappreciated American mystery writer who wrote about crime in rural Kentucky. 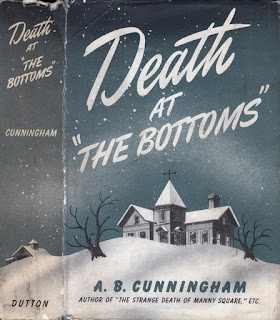 Here's an odd cast of characters for you: Snotnose Kale, Bigfoot Paden, Dummy Axling, Carlyn Aljor, Wib Turner, Butch Thord, Keb Folden, and Rod Kloth. Are we in Harry Stephen Keeler territory here? Maybe some kind of Damon Runyon tale with quaintly dubbed gangsters? Could it be some Lil Abner style murder mystery? The last guess isn't too far off. These are the people of A.B. Cunningham's WW2 era Kentucky in his fourth novel Death at "The Bottoms."

This is the first book by Cunningham I've read and I'm glad I chose this one as my introduction to his work. It's one of those old-fashioned backwoods detective novels that has echoes of the kind of detection done by Hesketh Pritchard's November Joe and not a little bit of Sherlock Holmes.

The victim is Vivian Beck and she appears to have been attacked by a pack of dogs that has been roaming and attacking livestock. Her body has been found in deep snow with several sets of dog tracks surrounding the immediate area. Farmers in town have been keeping their shotguns by their doors in case they hear the marauding canines. Sheriff Jess Roden, Cunningham's series detective, almost immediately sees that the wounds that caused her death could not have been made by dogs or any other animal. Why? Because many of them contain rust stains and flecks of corroded metal. Roden's investigation of the crime scene is only the first instance of some interesting fundamental detective work.

In a surprisingly violent scene early in the book a group of overgrown delinquents bent on ending the dog pack attacks go on a killing spree savagely and sadistically doing in a number of pets unfortunately running loose in the area. When Roden gets word of the dog killing spree he and a friend set out to avenge the town's pets. Roden sets his own dogs (he owns five) on the men with a hidden agenda in mind. He wants to have a few of the men incur dog attack wounds so that he can compare them with the wounds in the corpse of Vivian Beck. This is how the law works in rural Kentucky in the early 1940s.

As the book progresses it becomes increasingly odd. It seems to be suffering from a schizoid identity. While it is definitely a detective novel, the characters, the extreme violence and the dark tone make me want to treat it differently. It's almost as if Cunningham managed to create his own version of country noir not unlike the plots found in Daniel Woodrell's crime novels which were written more than forty years after this book. Although there is no real doomed obsessive love story here as in noir, there is a love triangle of sorts. Also, the characters are grotesque enough to have been created for a typical noir story. 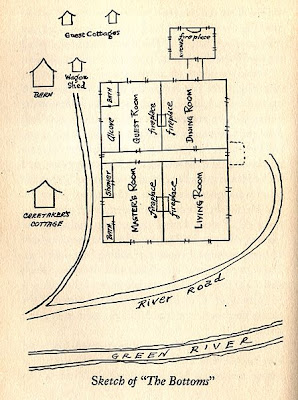 Bigfoot Paden is a moonshine maker with a still hidden away in an abandoned mine. Carlyn Aljor is a femme fatale of a nurse taking care of Ivy Martin, an ungrateful invalid, but spends her time seducing Chas Beck, the victim's handsome husband, whenever she has a chance. Then there's Dummy Axling, a deaf mute who is a key witness but whose communication skills are almost completely absent. His wild gesticulating and grunting lead only to more confusion rather than clearing up the strange circumstances surrounding the murder of Vivian Beck.  Finally, there's Big Nig, the token stereotyped black character complete with insulting phonetic dialect.  He's deputized by a US marshal in order to persuade moonshiner Bigfoot Paden to cooperate with the law. Big Nig's major scene is a Kentucky duel of sorts with the moonshiner. Bigfoot is armed with a fish gig and the giant black man threatens to cut Paden to ribbons with his straight razor he conveniently carries on a string around his neck. You don't find these kinds of characters in Agatha Christie, do you?

The finale has a few nice twists in store and I was genuinely taken by surprise when the murderer was unmasked. There's the usual summing up in the final chapter in the manner of a typical detective novel and all the odd angles of the story suddenly are revealed in their true light. The grotesqueness of some of the characters is what serves as the main form of misdirection in this book. The reader spends so much time appalled by their actions and words that he fails (as does Roden) to see what is really going on. Cunningham must be given credit for putting a very American spin on his mystery novels.
Posted by J F Norris at 10:45 AM