THE STORY: After his half brother Eddie dies in a motorcycle crash Morgan Astey travels to the quiet Wiltshire village of St. Martin to visit Eddie's grave and gather his belongings. To his shock he discovers the gravesite desecrated. Rumors surface of the cemetery vandalism being related to Macumba, a Brazilian syncretic religion that blends worship of Catholic saints with rites and rituals of African religions. Among other things Macumba followers believe that spirits of the dead can temporarily inhabit the living. As Morgan tries to find out why someone would dig up Eddie's grave Albert Cranshaw, a local gardener and odd job man, begins to behave strangely. He shows up in Eddie's old room, sits down to tea with Eddie's old landlady, and calls people by nicknames only Eddie knew. Is it possible that Eddie has returned from the grave and has Albert in his Possession (1976)?

THE CHARACTERS: Morgan Astey does not plan to spend as much time in St. Martin ,but the disturbance to his half brother's grave raises a variety of question and the news of a possible Macumba cult involved is as fascinating to him as it is aggravating. Another thing that he finds curious is that everyone tells him that Eddie's face was unharmed in the accident, one that should have shattered his body as he supposedly lost control of his motorcycle near a craggy hairpin turn by a rocky cliffside. And yet Eddie's body suffered only a few broken bones and a broken neck. Morgan is further suspicious of foul play after talking to a knowledgeable mechanic working on repairs to Eddie's motorcycle. He tells Morgan of some strange things found on the bike that would be inconsistent with a wreck on that cliffside.

Morgan teams up with Pat, daughter of the owner of St. Martin's newspaper, to ferret out the truth about Eddie's death and the strange behavior of Albert who seems to be "the new Eddie." In their adventures they meet Prof. Boyle, an eccentric academic who studies the slow worm and conducts weird scientific experiments; Boyle's sinister butler/companion George who may have a criminal past; a clique of corrupt millionaire businessmen; and Albert Cranshaw, the man with an inexplicable behavior change that may be rooted in the occult.

One of the memorable supporting players is Detective Sergeant Wright whose skill in manipulating and exploiting people is enviable. Wright has made it his business to know everyone's business and he uses his knowledge of the private lives of St Martin's citizenry to his advantage. So talented is Wright is getting others to do his bidding that Morgan realizes almost too late the policeman has employed him as an unofficial investigator. In suggesting to Morgan mysterious aspects about Eddie's death and inveigling him to seek answers to those questions Wright manages to get Morgan to do his job for him. Toward the end of the book Wright congratulates Morgan for successfully acting out in this unofficial capacity in one of their many tea room conversations. The policeman has an almost unquenchable craving for the various bakery treats offered at the many tea shops and cafes in town. He is always meeting Morgan in one of these shops where he can get yet another sampling of a tasty biscuit or tea cake, always proffering them to Morgan who almost always refuses. 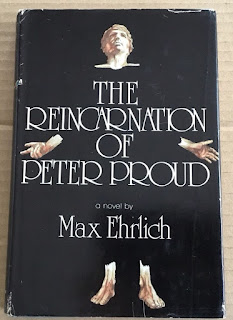 INNOVATIONS: In Possession we have yet another unusual treatment of loss of identity from the pen of L. P. Davies. In previous novels Davies used amnesia in his crime novels or blended loss of identity with science fiction in telling stories of extraterrestrial aliens passing themselves off as humans and vice versa, yet always managing to turn any novel into one of mystery and detection, even if it's more of a metaphysical detection than a police investigation. In his later career Davies turned away from science fiction themes and picked up on the 1970s trend in popular fiction of using occult and supernatural themes in his plots. The background of Macumba in Possession is minimal at best yet makes it all the more intriguing when trying to figure out if the mystery of Albert Cranshaw's personality transformation is a con job and a sinister use of extremely good acting to cover up for ulterior motives or a genuinely mystifying supernatural phenomena. I was reminded of the use of Santeria in Ramona Stewart's The Possession of Joel Delaney (1970) and the eerie other worldly events in The Reincarnation of Peter Proud (1973) by Max Ehrlich, two popular contemporary occult novels that would also become movies in the late 1970s.

THINGS I LEARNED: 1. Pat, editor/reporter/Jill of all trades, has a habit of exclaiming “What the Betty Martin?” I thought maybe this was some sort of Cockney slang, but I was wrong. It’s a lot more involved than that. Ready?

On a Linguistics internet forum I discovered that the origin of this phrase first appeared in Brewer’s seminal Dictionary of Phrase and Fable. Brewer claims it comes from an anecdote about a sailor who overheard someone in a foreign church utter the Latin phrase “Ah mihi, bea’te Martine” (Ah grant me, Blessed Martine). And that the sailor “could not make much out of it but it seemed to him very much like ‘All my eye and Betty Martin.’ ” Brewer defines the phrase as a regionalism that means something seen or heard is all nonsense.

But wait! The Latin is probably wrong another person says. It is probably “mihi beate Mater” (Grant me, Blessed Mother). And then the debate gets very scholarly and someone goes to the trouble of quoting at length references to the phrase in a 1780 book on slang by John Badcock tracing the origin to prayers and invocations made to St. Martin of Tours, the patron saint of innkeepers and reformed drunkards. [A patron for reformed drunkards! Is there one for just plain ol’ sots who haven’t seen the blazing light of sobriety?]

Then there is someone else who believes that the Latin phrase was alluded to in a poem by Coleridge that includes the lines: “ All my I! All my I!/He’s a heretic dog who but adds Betty Martin.” And that this led to the phrase becoming misheard and interpreted as “All my eye!” which gives us the commonly heard “All my eye and Betty Martin!” another slang phrase that means basically “What a load of malarkey!” a favorite Irish exclamation in the Norris household. In the US you often hear someone say (usually a mature and older person) “My eye!” when they disbelieve someone or think something is baloney.

All of it sounds like pretty good etymological research to me. You can decide on your own if the Latin for Blessed Martin or Blessed Mater later transmogrified into Betty Martin. 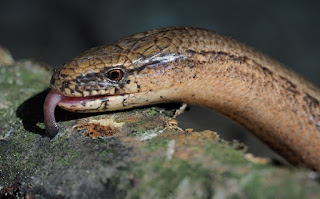 2. The crux of Professor Murton Boyle’s research is studying the behavior of Anguis fragilis, described throughout the novel as a type of worm. Many jokes are made about the poor man’s dreary personality and boring life making a career out of the study of worms. Davies always leads the reader to believe he is talking about the kind of worms the early bird goes after, earthworms that is. But Davies seems not to have understood what the animal truly is. Because it’s not a worm, it’s a reptile! The confusion comes no doubt in misinterpreting literally the layman’s name of “slow worm.” Regardless of its nickname "slow worm" Anguis fragilis is nevertheless a reptile, one of two species of legless lizard and it resembles not a worm but a snake.

The differences between a snake and a legless lizard are numerous: snakes have no eyelids, legless lizards do; snakes have forked tongues, legless lizards do not, etc. In no way could it be confused with a worm. Part of Boyle’s research and one of the unusual mysteries solved involving what Pat and Morgan think is a strange hieroglyphic code reveals that the slow worms Boyle studies were taught to run through mazes. I can imagine a legless lizard, a snake like creature, learning to do this, but I absolutely cannot believe that a worm (as Davies thought the thing was) could be taught to navigate a maze no matter how simple or complex. In any case, he was terribly wrong about the creature that Boyle studies and it sort of ruins the book a bit when you get to that portion of the story.

THE AUTHOR: Leslie Purnell Davies (1914-1988) was born in Crewe, England and graduated from Manchester University. In addition to writing numerous short stories under a variety of pseudonyms as well as twenty crime fiction and science fiction novels he was a pharmacist, optician, a tobacconist, and a painter in Rome. From about 1968 to the late 1970s he lived in Wales, then moved to the Canary Islands where he lived in happy retirement from writing.