FFB: The Flight of the Doves - Walter Macken 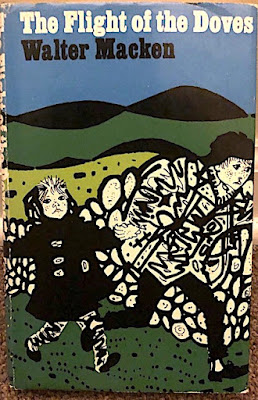 In celebration of the upcoming St. Patrick's Day weekend activities out here in Chicago here's a perfect book that embodies of the idea of the Luck of the Irish.

THE STORY: Fed up with the abuse of their cruel stepfather Finn Dove and sister Derval run away with plans to find refuge with their kindly grandmother who lives in Ireland. Their journey entails crossing the ocean by boat and then relying on their wits, what little money they've scraped together, and the kindness of strangers to help them reach their destination. But the police and nasty "Uncle Toby" (the nickname they call their stepfather) are hot on their trail.

THE CHARACTERS: Finn and Derval make for an immensely likeable pair. Finn is devoted to his sister often acting as surrogate parent since the death of both of their mother and father. He arranges their escape, pools their limited funds, packs clothes and comes up with the clever, if burdensome, idea of wearing multiple layers of clothes to lighten their makeshift luggage that will allow room for more important items like food and drink. He's wily and street smart knowing that children can seem invisible if they are in the company of adults. So he tries to make it appear that he and his sister are part of a large family in order to get aboard the boat to Ireland.

Remarkably, his resourcefulness need not be tested or challenged too much for the two children seem to be watched over by the powers of good wherever they travel. Nearly everyone they encounter -- from some ruffian boys playing football to a truck driver whose sideline is dealing in stolen goods -- helps them move along to their final destination. The Doves also meet up with a family of Irish travellers who temporarily adopt them, escape being handed off to the police for a £100 reward, and repeatedly manage to outwit the law and their "Uncle Toby" by a hair's breadth until they come to a much needed rest in Carraigmore.

Along the way a police inspector named Michael in charge of the children's search becomes one of the most unexpected Good Samaritans of the novel. After hearing of the overly dramatic reaction of Toby, the stepfather's seemingly genuine weeping and how he manipulates the entire police force into consoling him Michael suspects something false in the melodramatic display. If this man's sorrow were genuine indicating a caring and compassionate guardian then why did the Dove children flee his home? Something must not have been right. He decides to resign from the case and go "on holiday" with his supervisor's permission. In reality he goes undercover to find the kids himself and secretly helps them to their grandmother's home. Michael will play a big role in straightening out the legal mess of the children having been made Wards of the Court, ensuring they are released from Uncle Toby's clutches, and that they get their just rewards of their inheritance from a distant relation and a home where they can be genuinely loved.

INNOVATIONS: Intended as a children's book The Flight of the Doves(1968) often reads like a fairy tale for adults. The best of children's literature can appeal to a wide audience and it never seems as if Macken is limiting himself to younger readers though he clearly set out to write it for kids. As with most children's books there are lessons to be learned. He reminds us that Michael the conflicted police officer is a representative of the legal system and must not ever break the law even if he finds himself bending the rules a bit in order to help the children achieve their goal. It is the overarching theme of connectedness, responsibility, and innate decency that make the book so enjoyable and mature. Macken manages to do all this without once becoming treacly or sentimental in any way. Derval is the only character in the book who suffers from cuteness (excusable for a child so young, I guess) but everyone else has an edge to them in spite of being kind and extravagantly generous. Even Granny O'Flaherty when we finally meet her is far from the saintly type of grandmother one encounters in children's books. She's tough as nails and puts up a fight using her steadfast Irish common sense and an iron will. The law will not take her grandchildren away from her if she has any say.

QUOTES: "If it wasn't for you we would have been caught," said Finn.
"How do you know?" Michael asked. "Something else might have happened. You might have got away. If a fellow wants a thing badly enough, he will get it."

[Michael] would have to be prepared to meet the law with the truth. This was what the law was about. Truth had no law to fight. He hoped the children could keep free for the time he required to find the truth that would really free them. He thought, with Finn's determination, that they might.

"No! Don't tell me. I like mysteries, see. I can be makin' up stories about it for the rest of time. If I knew, there'd be no fun in it. [...] Most stories has no mysteries in them. It's just nothing when you hear the truth. Sometimes lies is better than truth for the sake of adventure."

THE MOVIE: The Flight of the Doves was filmed in 1971 starring 19 year-old Jack Wild as Finn, Dorothy McGuire as Granny, and Stanley Holloway as the Judge. The movie also reunited Wild with his Oliver! co-star, delightful British character actor Ron Moody who played Hawk Dove, a new character created especially for the movie. I believe Hawk was the brother of the kids' father (so their real uncle) who is next in line to inherit the money if anything should happen to the children. In the film Moody is the main antagonist as he tries to find the kids and ...uh... dispose of them so that the trust fund money can be his alone. He adopts a variety of disguises (I think he was a failed actor, but my memory is fuzzy) in order to cajole and befriend Finn and Derval. Despite Finn and Derval's attempt to disguise themselves by reversing their genders, they cut their hair, dye it, and change clothes, Hawk Dove is able to track them down. I saw the movie ages ago when it was first released in movie theaters back in the 70s when I was a kid and just recently watched a few clips on the TMC website to help refresh my memory. But none of the clips I viewed were of scenes with Moody and the two children. Basically it's very similar to the book with the added tension and suspense of a murderous relative trying to do in the kids. The movie is available on DVD and various clips are on both the TMC website and YouTube. THE AUTHOR: Walter Macken (1915-1967) was born in Galway and began his career in theater as an actor then playwright and director. In his youth he was with the Little Gaelic Theater in Galway where plays were presented in his native Irish language in which Macken was fluent. In 1948 he joined Abbey Theater where his playwriting flourished. His play Home is the Hero was the first Abbey production to travel overseas to Broadway and was also filmed three times (once for German TV). The 1959 film of Home Is the Hero was the first movie to be produced and filmed at Ardmore Studios in Dublin and featured the entire company of the Abbey Theater with American actor Arthur Kennedy as Willie O'Reilly the only non-Irish performer in the cast. Macken later turned to novels and is best known for his trilogy of books -- Seek the Fair Land (1959), The Silent People (1962) and The Scorching Wind (1966) -- forming an epic saga about Ireland's struggle to gain freedom from England. He wrote one other children's book The Island of the Great Yellow Ox (1966) prior to The Flight of the Doves which turned out to be his final work. He died unexpectedly of a heart attack at his home in Galway at the age of 51. 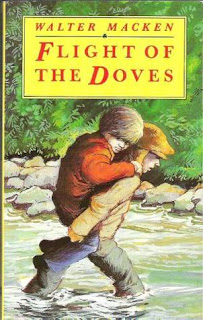 EASY TO FIND? To my great surprise I discovered that The Flight of the Doves has remained in print since it was first published. It's most recent edition is dated 2007. There are hundreds of copies for sale in the used book market, mostly paperback editions from both US and UK houses. The UK first edition appears to be a genuine rarity though just last year I managed to find a copy with a DJ much to my delight. It should not be difficult to locate a copy of this book no matter where you live. I'm sure it's still on the shelves of library children's sections, too.

I loved this movie when I was a kid and have never forgotten it. I only just read the book for the first time this year. It brought back a flood of memories and it was such a welcome relief from the gruesome and horrific novels I have been reading for the past couple of weeks. For some The Flight of the Doves may seem to be overflowing with convenient plot incidents, coincidence, and too much of the kindness of strangers.  For me, however, it was just the book I needed. This adventurous story will remind any reader that  goodness does exist in the world and of how we all have a responsibility to each other to do the right thing no matter how much the world seems to be against it.
Posted by J F Norris at 11:19 AM