Death of a Doll - Hilda Lawrence

Hilda Lawrence was not a prolific mystery writer. However, in her small output of only five books, she gave us a fascinating type of crime novel that included detection and psychological suspense, some of the earliest cases of genre blending in the post-WW2 era. Her first novel Blood upon the Snow (1944) introduced a private eye who nearly met his match with two elderly spinsters, Beulah Pond and Bessy Petty, sort of a 1940s version of the Snoop Sisters minus the mystery writing angle. Mark East, the private detective, would return two more times accompanied in each book by Beulah and Bessy.  Death of a Doll (1947) is the third and last case for this highly unusual sleuthing trio and it may be their most complex and intriguing crime solving case of the the lot.

Right off the bat this a very different Mark East mystery because it is set in the heart of Manhattan. The previous two books took place in isolated rural communities far away from the hustle and bustle of city life. Lawrence has a knack for finding the darkness no matter where she sets her books. Like the previous two mysteries in the trilogy of detective novels Death of a Doll is fraught with tension, long hidden secrets and one of the most sinister murderers to spring from the macabre imagination of its writer. Lawrence delves into the dangerous side of female friendships, the petty jealousies that can turn from mean spiritedness to treacherous revenge to murderous rage.

The mystery itself centers on Hope House, a women's boarding house and its mix of working class women residents and its all female staff.  Ruth Miller, is the newest resident, a shop girl employed at the somewhat ritzy department store Blackman's. Two girls who work in Blackman's storeroom currently live at Hope House and let Ruth know of a recent vacancy. She is excited to be moving in and shares this excitement with one of her favorite customers, Roberta Sutton (newly married, fresh out of the previous book A Time to Die). This conversation will come back to haunt Roberta when days later she hears of some very sad news. Ruth died shortly after moving in from a fatal fall out of her apartment window. 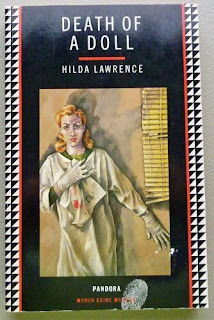 Prior to the accident Lawrence lets us know that Ruth has been carrying with her a terrible secret. One she was sure that she would never have to confront. But on her first day all her buried fears, her angst about this secret and her life prior to New York City, come rushing back in a flood of memories when she sees and hears something.  She actually tries to flee and escape confronting this past but she is dragged back by Monica Brady, one of the two women in charge of Hope House, who senses something strange in Ruth's behavior. She wants to help the girl but also has some suspicions and wants to get at the truth.

No one can prevent what happens. Lawrence allows us to see Ruth meet up with her past and we know that she never suffered an accidental fall that more and more the police want to rule as a suicide. Roberta Sutton is sure of Ruth's death was neither accident nor suicide based solely on the conversation she had with Ruth. Seeing her giddy excitement, knowing that she was ready for change and improvement in her life Roberta is convinced that Ruth would never take her own life. She asks her friend Mark East to look into Ruth's death and prove her right. With the help of his two old lady assistants and in cooperation with Inspector Foy of the NYPD  Mark digs into Ruth's past and discovers a killer like no other he's met before.

What Lawrence does so well here is shake up the conventions of the private eye urban world with an offbeat and decidedly female perspective of her two spinster detectives who tackle the big city environment with gusto. Beulah is tough, nearly humorless and shrewd. Bessy is flighty, garrulous, overly imaginative and has tendency to dip into the sherry bottle too often. Both are formidable each in her own way. Beulah manages to instill a bit of terror in the residents of Hope House when she goes undercover as Ruth's disabled aunt (she fakes a limp) and starts asking a lot of prying questions.  In addition to exploiting their age and appearance they are imaginatively resourceful. They manage to find a dry cleaner and an eye doctor by thinking exactly like Ruth and knowing how she would choose those services based on her character of a small town girl just getting used to a big city. 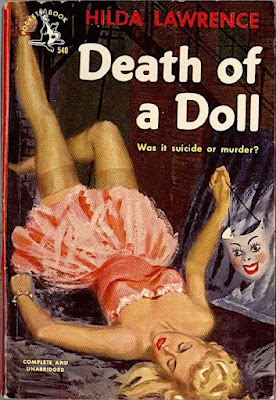 The detective work tends to be a mixture of the kind of psychological probing of the victim's life you find in most mystery fiction (more prevalent in post-WW2 private eye fiction), and the oddball clue finding of the traditional mystery already seeming quaintly old-fashioned by 1947. Ruth's death took place during a costume party in which all the residents were dressed in identical rag doll costumes. A music box is used as a murder weapon. One of the residents is blind, her childlike inquisitive nature adds an eerie chill when she appears on the scene. Then there are taxi chases and insensitive grilling sessions that are stock in trade of private eye novels. The balance between the two seemingly disparate types of mystery blend well and are almost indistinguishable from each other. It's as if Lawrence has invented her own subgenre, and one that seems a delightful paradox for mystery writing -- the cozy urban murder mystery.

Even more challenging, perhaps Lawrence's strongest quality as a novelist, is that nothing is ever really spelled out. Her writing and narrative structure is done in such a way that much of what is key to the story must be gleaned from the storytelling itself. Ruth's secret is presented to the reader piecemeal but with well planted clues.  A phone call made early in the book and a passing reference to a number written down comes back to provide a major clue for the detective trio.  Nothing that seems an inconsequential detail is put there without a reason. With a large cast of women characters resorting to the pronoun "she" often adds a level of confusion and mystery. Just who is she talking about among all the women? But it is all done for conscious effect.

The plotting here is strong, there is an abundance of detective work from two different schools, and the characters are never boring. The two old women do provide for an ample amount of humor but never at the expense of the mystery plot. It all works splendidly together culminating in a finale tinged with disturbing tragedy and not a little unexpected sadness.

Death of a Doll has been released in a new edition (paperback and digital) from the fine folks at Agora Books, a UK based outfit doing excellent work in reissuing classic crime novels. Many of you are familiar with the Richard Hull editions that have been coming out for the past two years. Here is their first American mystery writer added to their catalogue. Hilda Lawrence is not only an excellent addition to the Agora Books line, but a writer who has been long overdue for new look, new editions and a new audience. Anyone interested in the history of the genre, in a true original who invigorated the mystery world with unusual genre blending techniques would be well advised to check out Death of a Doll.