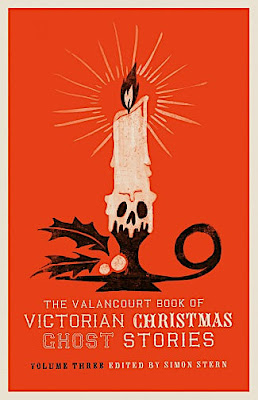 The Valancourt Book of Victorian Christmas Ghost Stories, vol. 3 (2018) is a brand new book, but the contents are mostly forgotten. In reviewing the Table of Contents I recognized only three writers' names: Mrs. Riddell, Hugh Conway and Mrs. Henry Wood. There is a Quiller-Couch, too. But this one is Lilian, Arthur's younger sister.  And the old reliable and immensely prolific author "Anonymous" crops up five times. Edited and introduced by Simon Stern, an associate professor of literature and law at the University of Toronto, this latest volume of Valancourt's annual tribute to the Victorian tradition of telling ghost stories is the usual mixed bag of maturely written and neatly constructed stories and a handful of trifles and vignettes embarrassingly showing their age. Gallivanting among the usual angry specters and troubled ghosts seeking retribution we get a haunted oven, a haunted churchyard, and a literally hitch-hiking creepy yellow-eyed child ghost. Only Mrs. J. H .Riddell's "Walnut-Tree House" seems to have been anthologized before; it was the only story I recognized here.

There are nineteen stories and one silly poem in this latest volume. About one quarter of the tales are mere wisps, two or three pages short, more vignettes and drawn out anecdotes than full-fledged stories. The earliest dated original publication in this collection is the story by Mrs. Henry Wood, "The Ghost of the Hollow Field," which appeared in Newry Commercial Telegraph on Dec 25, 1867.  The remaining tales are taken from newspapers and magazines published mostly in the 1880s and 1890s, with a few taken from the 1870s.

I was slightly disappointed to find three separate homages to Ebenezer Scrooge. "The Wicked Editor's Christmas Dream" is an obvious parody of Dickens and intended as a satire of commercial journalism, while another is straight out plagiarism. Prosaically titled "A Christmas Ghost Story" it substitutes Scrooge for a miserly mill owner named Frank Underwood visited by a single ghost that guides him to three separate scenes of his life which remind him of his cruel and avaricious ways. It all leads to an overnight personality transformation just as with Scrooge. Nothing original at all and one of the many Anonymous tales. Clearly no one wanted to be sued for plagiarism by attaching his or her name to that blatant rip-off.  The third is a rather well done re-telling of the Scrooge and Cratchit work relationship with the clerk almost as villainous as his employer.

"Old Simons' Ghost!" with its miserly old man who runs a business of questionable integrity is the best of the Dicken's inspired stories.  The story explores the work relationship between Simons and his beleaguered clerk who finds himself unemployed only a few days before Christmas when Old Simons drops dead in his chair. The clerk dubbed "Artful" Bruff knows that Simons has no relatives and sets up his home in the business determined to find Simons' hidden trove of money. Then on Christmas Eve Bruff is delivered a mysterious triangular shaped trunk with the warning "Not To Be Opened Until Christmas."  It's not hard to anticipate the contents of that trunk nor what follows in the conclusion. Despite the familiarity of the plot the anonymous author, in an ironic send-up and reversal of the usual Dickens sentimental style, tells an interesting story of how Bruff finds himself taking on the traits and attitudes that he despised in his employer. Of note, this is one of two American stories in the anthology. I can only imagine that there were dozens of these homages, on both sides of the Atlantic, after the wild popularity of Dicken's A Christmas Carol in 1843. 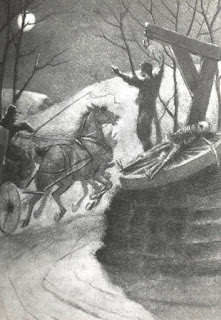 Of those I've sampled so far, a handful of the stories contain mystery elements and crimes gone unpunished with themes of revenge featured frequently. A ghost literally points to hidden evidence of who killed her in "The Haunted Ashchurch",  a mother's ghost wanders the streets trying to warn her son of impending danger the same day that a horrible murder occurs in "The Ghost of the Hollow Field",  and "A Dead Man's Face" (by Hugh Conway) haunts a man eager to marry a beautiful American woman who harbors a ghastly secret.

There are a few examples of the comic ghost story including the previously mentioned "...Wicked Editor...";  "The Barber's Ghost," a shaggy dog story that could be told in a few sentences rather than two pages; and the very strange story of "The Haunted Oven" by W.L. Blackley. I had a heck of time getting through this one because Blackley decided to use the voice of an Irish narrator and rendered all of the dialogue and the narration in Irish dialect. Thick Irish dialect. But it's a very bizarre idea for a story - bread baked in the titular oven comes out with dire warnings of impeding death spelled out in reverse letters. The reason for this "haunting" is rationalized with a mix of black humor and absurdity.  It says a lot about the resourcefulness of the Irish characters when building materials are lacking. 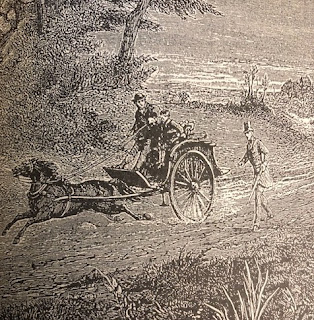 As a quintessential example of what the Victorian ghost story can achieve when in the hands of a talented and imaginative writer look to Lilian Quiller Couch's story "The Devils' Own".  She makes use of her penchant for folklore and presents a tale that is seemingly based on fact. This story features the creepy yellow-eyed child I mentioned above. Poor Octavius Nottage is relentlessly pursued by this hitchhiking apparition whenever he sets out on his wagon making his deliveries. Octavius is ridiculed by the townspeople who never once seriously believe in the ghost child he claims is haunting him.  Only Admonition Ellery feels sorry for him and in her sympathy slowly finds herself falling in love with "Ocky".  In order to get her man she tells him she believes him and lies about witnessing the specter while they ride together on his wagon cart. Then she comes up with a solution to his haunting.  After consulting with her aunt who has knowledge of occult ways she tells Octavius that he must ride with his promised bride, hold her hand, and utter a rhyming spell to chase away the ghost. When Ocky tells Admonition he has no promised bride she looks at him imploringly. And with that one look he understands everything. But there is one more ghastly event before all will turn out well.

Love and ghosts go hand and hand in the Victorian ghost story, especially those told at Christmastime.
Posted by J F Norris at 12:49 PM