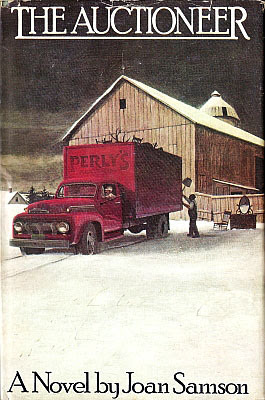 THE STORY: Harlowe, New Hampshire has a new resident. Perly Dunsmore set up house in the old Fawkes place and is asked to help raise funds for a new crew of deputies for the town’s meager police force. Perly is a talented auctioneer whose charismatic charm is his primary tool in getting the townspeople to donate their unwanted belongings to the auction that will help raise funds for the deputy’s pay. The success of the first leads to another until the auctions begin to occur almost weekly. With each new fundraiser Perly requires more things to sell. His simple requests for donations become more demanding until people find their homes invaded, their possessions taken away without consent or given up only after violent threats. The Auctioneer (1975) tells the story of a town at the mercy of Perly Dunsmore, his transformation from Good Samaritan to powerful controller of everyone and everything in Harlowe, and the dire effects of giving up and giving in to promises that may never come true.

THE CHARACTERS: Rather than seeing the effect Perly has on the entire town and getting multiple viewpoints and stories of several characters as a contemporary novelist might approach this intriguing set up, Samson focuses her story on the Moore family (John, Mim, daughter Hildie, and John’s mother) who have been farmers in Harlowe for generations. We watch them slowly lose everything they possess, everything they hold dear, including the love they have for each other. On occasion Samson has Mim visit her friends and we get some painful and harrowing vignettes featuring other families. Through Mim’s eyes we see how her friends are dealing with Perly’s sinister command of Harlowe and the treacherous ease with which he simply takes what he wants whenever he wants it. 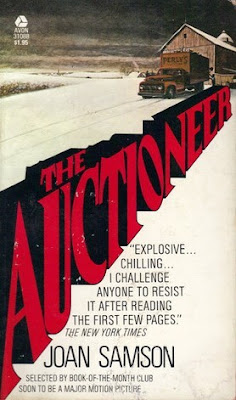 After having lost her treasured vanity table, a wedding gift from her mother, and watching John’s milking cows taken away for one of the many auctions Mim travels into town to visit Agnes Cogswell, the wife of one of Perly’s chief deputies. Here in a home that the reader thinks may have been spared from Perl’s rapacious collection of furniture and livestock Mim finds just the opposite and worse. Agnes and her husband Mickey have not only given up their belongings, Angie has sacrificed even more – her sanity. Word has travelled fast about the perils of fighting back and refusing Perly’s demands. Some residents have been victims of fatal accidents while others are leaving town taking what little they have left. Agnes fears not for her own life, but for the life of her children. Mim finds Agnes babbling in her kitchen, barely coherent, but clearly not of sound mind. More disturbing is the fact that the Cogswell’s eldest teenage son is patrolling the grounds with a shotgun and two Dobermans to protect the home from unwanted visitors. Mim leaves fearing that she too may succumb to paranoid imaginings and rushes home to make sure that Hildie is unharmed, but deep in her heart praying that her daughter is actually still in the house.

That we never get to know Perly’s thoughts unless he in the company of other characters is Samson’s most effective tool. Everything he does and says is seen through the eyes of the victimized. Perly is rarely seen alone and we never get to know his inner thoughts the way we do those of John and Mim. His dialogue more than his actions is the most terrifying part of the book. His grandiloquent speeches promise a new life for the people of Harlowe – that prosperity is certain the more you spend, that even more riches will follow once you surrender your treasures and prizes that only have sentimental value.

With each sale Perly rewards those who “donate’ their goods with a pittance of a rebate. John’s first check is for $3. By the time he earns $300 for the sale of his own land that brought in $5800 he would rather destroy the money than accept it. Most insidious is the first scene where Perly manages to get Hildie to give away her favorite toy – a red wagon. John is forced to buy it back for $1.50. After that Perly wins the friendship of Hildie who agrees to attend his Sunday school classes. What exactly goes on in those classes we never find out. But it can’t be good. 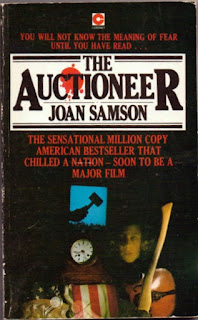 ATMOSPHERE: Gothic touches come in striking and unexpected sequences as with the omen of poison ivy that slowly encroaches onto the Moore property. John says he will tend to it but he never follows through. Mim sees the aftermath of the ivy infestation when she visits an untended grave in their private family cemetery on the grounds of the farm. With her bare hands she tears out the poison ivy ("It climbed around and around the trunks of the old cheery trees and coiled its way along the branches, like snakes moving toward robins' nests.") and of course suffers the consequences. This leads to a new forced isolation “for fear of starting the plague’ on Hildie and her husband who is already avoiding her and now shuns her in bed.

After telling of her visit with Agnes to John (“She counts her children every night.”) and expressing her fears of farm country being developed into a city of Perly’s imagination John grabs Mim and holds her dearly. Around them the elements seem to rise up and express the dread and fear the Moore’s are feeling:


"John held Mim. The house banged and creaked and clattered as if it were full of secret footsteps. The November wind outside blew over the pond and the pasture and the stand of heavy white pine. It pulled at the shingles of the empty barn and rattled the loose sash, searching out the couple who lay in each other’s arms listening to the warm breath of the child on the floor beside them."


QUOTES: "You see me runnin', Ma?" John asked, jolting to his feet so that Hildie slid to the floor.
"Like a jackrabbit, boy," said Ma. "Where you think it's goin' to get you to?"
"Next time I'll stand up and let him shoot me," John shouted. "Then where'll you be?" He yanked the door open.
Ma took a step toward him. "And that's just another way of runnin'," she shouted back.

Mim stood at the sink scraping carrots. "Could we get ourselves on welfare, do you think?" she asked. "It's hardly shameful nowadays."
"Since when?" Ma said. "Maybe not for folk who ain't got sense enough to hang on to what's theirs."

"Things is things. But they can’t take your flesh and blood. And they can’t take the land because we’re on it."
"Words, John. That’s not stoppin’ them."
"This is still America, Mim. They can’t. There’s limits." 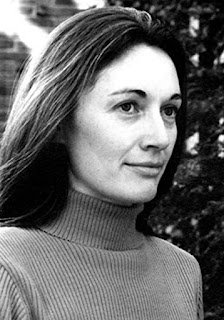 THE AUTHOR: Joan Samson attended Wellesley finished her undergraduate work at University of Chicago, received her M.A. from Tufts and married twice. After an interesting nomadic life (that included a home and job in London) she settled in New Hampshire. She held various teaching positions through the 1960s at elementary schools both in the US and the UK, then later became an editor at a literary journal. In the Viet Nam era she and her second husband Warren Carberg became active in the anti-war movement. Her first published work was a non-fiction book, Watching the New Baby, intended to teach children about what it's like having a new sibling. She also began writing short stories. Encouraged by Carberg she expanded one of the stories into The Auctioneer. It was rather a sensation during its day with a huge marketing campaign, rave reviews, sales of over one million copies and even a screenplay option which sadly never led to a movie. In one of life's cruel twists of Fate five months after the book was published Samson succumbed to a terminal illness and died. She has, however, lived long after achieving a cult status with The Auctioneer, her only novel and one that is well remembered, powerfully affecting anyone who has read it. 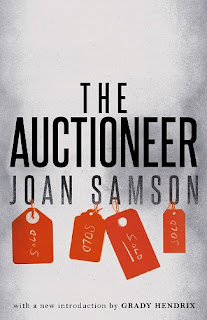 EASY TO FIND? After being out of print for over three decades The Auctioneer was reprinted this year by Valancourt Books. In this reissue you get the full novel, plus added bonuses of an informative introduction by horror fiction enthusiast and novelist Grady Hendrix, and afterword titled "Remembering Joan Samson" by Warren Carberg. Valancourt offers their books in paperback, hardcover or digital editions. Those who like the feel and smell of old books are in luck as well. There are dozens of copies of both US and UK editions with the US Avon paperback leading the pack. Most of these copies are extremely cheap, but check their condition before ordering. Vintage paperback editions of Samson's only novel far outnumber the hardcover editions. The US first edition is now rather scarce and those with dust jackets in G to VG condition range from $45 to $110.
Posted by J F Norris at 1:50 PM