VERDICT OF US ALL: The Shadow of the Wolf - R. Austin Freeman 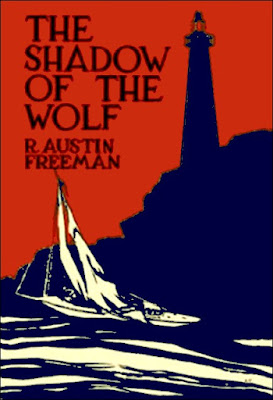 JJ at "The Invisible Event" has revived the once somewhat regular meme on the vintage mystery blogs in which participants ramble on a particular topic. This month we talk about our favorite book by a writer who we don't care for or have avoided over time because we just don't like his or her style of mystery writing. Took me a while to come up with one for this because most bad mystery writers in my experience don't really have much to recommend in their overall work unless you want to read the books as self-parodies or "Alternative Classics." But that's not the point of this week's topic. So I had to reach back in time to remember one single book by a writer who I just don't read anymore because... well... frankly he bores me to death. And that's R. Austin Freeman.

Freeman as we all know was a pioneer in the scientific detective short story and also the inverted detective story. He also wrote several inverted detective novels but only one of them stands out in my mind as something rather remarkable. The Shadow of the Wolf (1928) is one of his more complex mystery novels loaded with the kind of arcane scientific talk (like a long dissertation on the formation of barnacles on a ship) that aid Dr. John Thorndyke in tracking down his elusive murderous prey. And yet despite what might have been yet another droning, boring book I found it utterly fascinating. There's a paradox worthy of Father Brown. It's one of the few Thorndyke novels that I found truly suspenseful. Another of Freeman's inverted detective novels we therefore know the identity of the murderer in The Shadow of the Wolf from the outset. Thorndyke's methods, however, are so odd and unusual in this novel, a nautical mystery about ships and the sea, that I was transfixed. I tend to write a lot about the "Things I Learned" in books of this type and there is a lot to fill the head of the insatiably curious reader in The Shadow of the Wolf.

I rarely go back to Freeman's books because they belong to an old-fashioned type of detective story that no longer excites me. His obsession with all things related to Egyptology gets tiresome; his characters don't ring true as human beings to me; and his often stodgy prose hasn't aged well. But I will always recommend The Shadow of the Wolf for its faster than normal pace (for Freeman, that is), its unusual subject matter, and a story that unravels with true suspense and a couple of thrilling surprises.
Posted by J F Norris at 7:15 AM