FFB: The Thing in the Brook - Peter Storme 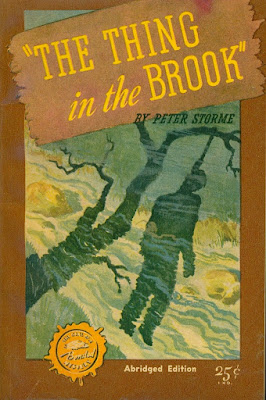 THE STORY: Biologist James Whitby's scientific studies are interrupted when he inadvertently becomes one of two men who discover the grisly body hanging from a tree above the brook in the rural village of Brookdale. The victim, a much loathed local, was strangled, bludgeoned and then hanged. Someone definitely wanted him dead. Could this be another victim of the legendary thing that is said to haunt the waters of the brook? What happened to that young woman so many years ago? Her clothes were found in a neat pile by the bank but not a trace of her body ever turned up.

THE CHARACTERS: Whitby narrates the story, but he's not at all interested in solving the baffling crime of a thrice murdered victim. He'd rather attend to his involved study of the local Myxomycetes. That's slime mold to all us non-scientific schmoes. Slime molds! You'd think that this was a parody of detective novels the way the opening chapters play out. What with Whitby's reluctance to cooperate with the state troopers, the motorcycle cop who keeps showing up to interrogate the villagers, and Whitby's overeager house guest Henry Hale (a murder mystery addict and budding amateur criminologist) sticking his nose into the investigation like some junior Philo Vance. There is a wry humor that pervades the story, but the plot turns very grim and serious by the midpoint.

So is it a parody? Not really. A homage to the intuititionist school seems more likely. Despite frequent deprecating allusions to fictional detectives like Lord Peter Wimsey and Vance, Whitby fails to deter Henry from his goal of uncovering the identity of Howard Stanton's killer. Two more deaths will occur before the surprising finale.

Hale is sort of a run-of-the-mill amateur sleuth that you find in numerous American mystery novels of the mid-1930s. I was reminded of the Patrick Quentin and Jonathan Stagge novels because the of the bizarre nature of the murders, the creepy atmosphere, the legend of the "thing" of the title, and a slightly macabre obsession with murder and occult phenomena.

Leading me to the most interesting character of the book -- Mr. Marigold, an overweight, florid man of middle age who lives alone with his cat Herman. Marigold regales Hale with a litany of grotesque murders from the annals of crime reveling in the lurid details of violence and unusual weapons employed from medieval times to the post-WW1 years. Later, Marigold discusses his interest in psychic research with Whitby. 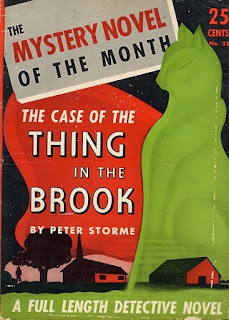 INNOVATIONS: There is a strong hint that something paranormal is going on in Brookdale, but sadly this never really pans out. Still, the story has a neat resolution that may raise a few eyebrows and frustrate traditionalists in its iconoclastic disregard for the finer rules of detective novel writing.

Storme clearly seems to be inspired by Van Dine and Quentin in his plotting and detective novel structuring. Hale calls himself an intuitive sleuth and not a true detective. He spends much of his time looking for the "psychological pattern" of the crimes foreshadowing the kind of criminal profiling techniques that become very popular in late 20th century crime novels. Hale relies perhaps too much on inference and intuition and does not impress the police even in his long lecture in the final chapter (teasingly titled "Parlor Tricks") when he reveals the truth. Captain Macready reminds us all that guesswork has no place in real police work when he warns Hale, "You'll need better evidence than that." And yet all along Storme has done an admirable job of supplying the reader with subtle clues -- mostly presented in character sketches and dialogue -- so that he too can come to the same conclusion as Henry Hale. The revelation of the motive and methods of the murders may break a couple of rules for traditional detective novels, but I'll give Storme bonus points for subverting the genre just when it needed shaking up.

THE AUTHOR: "Peter Storme" wrote only one detective novel. His real name was Philip Van Doren Stern, an American historian and short story anthologist who wrote several non-fiction volumes on the Civil War as well as editing a collection of Poe's writing (both fiction and non-fiction) and a noteworthy ghost story anthology. In addition to his writing Stern made a living in the publishing industry working as an editor for Simon & Schuster, Pocket Books and Knopf at various times throughout his lifetime.  Stern's claim to fame, however, will always be his short story "The Greatest Gift" which has been immortalized on film as the Christmas classic It's A Wonderful Life.

EASY TO FIND? At one time it was fairly easy to find either of the two US paperback editions of The Thing in the Brook (1937). But as with the majority of books I enjoy and like to write about this title is becoming increasingly scarce in all its editions. As far as I know there is no UK edition of this book. The original US first edition (Simon & Schuster, 1937) is practically a rare book these days as I found only two copies for sale online. If you do go looking, you will increase your chances of finding a copy knowing that the digest paperback edition was retitled The Case of the Thing in the Brook which was reprinted in 1941.
Posted by J F Norris at 11:12 AM