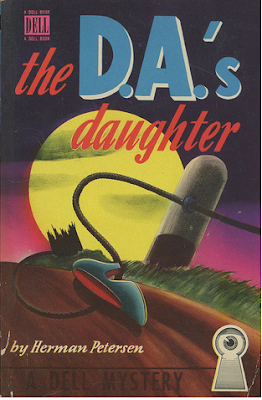 Narrated by Hank Wilbur, a college age man earning extra money to pay for school by selling insurance, The D.A.'s Daughter (1943) is reminiscent of a more adult Nancy Drew mystery. He pairs up with the title character Lydia Bannock to solve the suspicious car accident that leads to the death of a young widow he had befriended. As the title implies Lydia has more importance to the story than just as a sidekick. Though Hank is our narrator and does a lot of sleuthing on his own it is Lydia who in the end unmasks the villain.

This is a pleasant enough detective novel with an amiable hero and some well drawn characters. But it's also an unusually subversive novel. Hank is probably about 19 years old (he's about to enter his first year of college) and yet he has an oddly intimate friendship with the 30-something Mrs. Andrews. They first meet at the lake that borders Mrs. Andrews' now deceased husband's property. She spends a lot of time sunbathing on the lakefront dock where Hank likes to swim. Her husband used to chase away the kids when Hank was younger. In a flashback he recounts his first meeting with Mrs. Andrews back in his high school days. At this meeting Hank teaches Mrs. Andrews how to swim. It all has a Benjamin/Mrs. Robinson vibe to it though Petersen never makes Mrs. Andrews appear to be the aggressor. Hank does wonder if she has more in mind but he stays a gentleman throughout. The swimming lessons continue for months right up to Mrs. Andrews' death.

Later, there is another scene with an older woman, but this time the attraction is all imagined. Hank has a plan to invite himself to dinner at the home of Clarabelle Thompson, a tough mannish woman who runs a cattle farm. She has him help her with a plowing chore but he slips and falls into mud. She takes him into her house, gets him to undress and bathe while she makes him dinner. Hank interrogates her slyly at dinner about her involvement in Mrs. Andrews death and the farmer starts to get irritated. Keep in mind that Hank is half naked all through dinner wearing an oversize robe his hostess has given him and nothing else. Still, she invites Hank to spend the night while his clothes are being washed and dried, but Hank gets nervous thinking she has an ulterior motive. This causes Clarabelle, a woman old enough to be his Hank's mother, to burst out laughing. "Lock your door," she tells him, "if you think I might be after you." And goes to bed still laughing to herself. You don't often encounter these scenes in 1940s era mystery novels, maybe with adults but not with a 19 year old boy and a 40 year old woman.

More risqué sex farce stuff is to come. Hank strips and goes to bed naked only to be wakened by stones being thrown at the window. He goes to the window with a sheet wrapped around his crotch likening himself to Tarzan in a loincloth. Turns out Lydia is outside wondering why he never made it home. An amusing scene follows as she gets the nearly naked Hank into her car and sneaks him back to his house. All the during the ride home Lydia teases him with jibes and banter about what he was up to with Clarabelle. 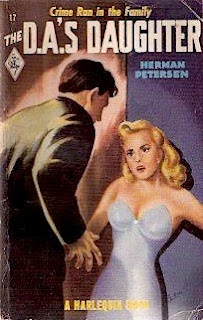 The detective novel plot is intriguing. Mrs. Andrews had bought a $100,000 life insurance policy from Hank a few days prior to her car accident. She had no children and he wondered who she would make her beneficiary. Hank and Lydia, along with Lydia's father the District Attorney, are sure that Mrs. Andrew's car was monkeyed with causing the accident and that one of her employees will benefit from the insurance money. When it is revealed that the policy was made out to a man in prison the case arouses the interest of the police. The story then deals with trying to uncover the connection between the man in prison and Mrs. Andrews and why she felt it necessary to make him her beneficiary. Other odd incidents follow, the most unusual being Hank's underwater investigations at the car wreck in the river. He tries to find Mrs. Andrews' diary which was apparently in her purse that was never recovered from the car wreck. Trouble is someone has been watching both he and Lydia and they unwittingly endanger themselves several times.

This was Petersen's last detective novel of only four books. While it held my interest with its attractive young couple in their twenties and gave yet another look into life in rural upstate New York during the war years The D.A.'s Daughter was not as good as Old Bones previously reviewed on this blog. Fans of subversive detective novels might be interested in the "cougar" scenes and those who like their detectives youthful and impetuous will definitely find a lot to entertain them.

This is my contribution to the "Crimes of the Century" meme for February for which we read books published in 1943.  Check out the rest of the books explored at Past Offenses.